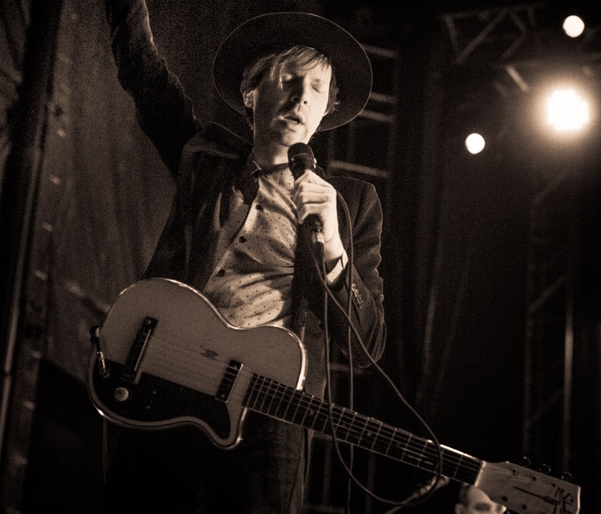 A month from today, I’ll be at the Susquehanna Bank Center on a (hopefully) crisp and breezy summer evening, and the stage just down the way will be populated by a handful of musicians fronted by the one and only Beck.

I was massively excited when we announced the eclectic modern-rock songwriter as one of the XPoNential Music Festival headliners, but like many of you, I was a bit uncertain. What kind of Beck would we get with this show? His last release was an unrecorded songbook that other musicians were welcome to perform in their own chamber-rock groups. His current release is the introspective and hushed Morning Phase. Would the XPNFest bring Beck backed by a band? Would it be a sad-man band or snappy party crew? He’s a knockout performer no matter the tone of the setlist – a very varied 2006 show at the Tower proved that – but something about an outdoor festival setting seems to beg for the livelier side of the catalog. Is that what we were getting? 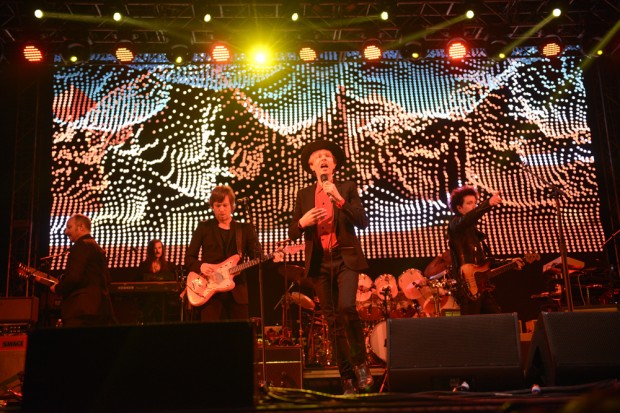 Beck and his band at Firefly | Photo by Joe Del Tufo | joedeltufo.com

Beck’s performance last weekend at the Firefly Music Festival in Delaware assuaged my fears. The big and bright Saturday night set, played to a crowd of thousands clamored around the Lawn Stage of the festival, was more celebratory than somber. It pulled selections from across the breadth of his catalog – 90s slacker rock intertwined with aughties postmodern funk, hip-hop beats cut into overblown punk. And the quiet side of his catalog wasn’t ignored either – “Blue Moon,” the sublime single from Phase, made an appearance alongside Sea Change‘s shuffling “Lost Cause”; the bluesy harmonica stomp of “One Foot in the Grave” showed up as well.

Those songs were great to hear, but the energy of other selections was staggering. Rousing opener “Devil’s Haircut” got things off to a punchy start, the iconic “Loser” dropped early on in the setlist, “Sexx Laws” was delightful and the off-the-hook energy of “E-Pro” was unreal. Clad in a button down shirt, suit jacket and stylish fedora, Beck leaped gleefully in the air, brandishing a guitar and mugging with his five-piece band while thousands of LED lights twinkled behind them in a psychedelic display.

Elsewhere he crooned, and danced – showed he’s still adept at doing the robot, to be specific – and dropped a sweet cover of Michael Jackson’s “Billie Jean.” By the closing notes of “Where It’s At” and the subsequent bows, I was dazed and collecting pieces my brain from all across this unassuming field in Kent County.

“I can’t believe he’s playing our festival,” I kept repeating to myself. And granted, we may have a completely different Beck. He may be in quiet Sunday night mode, or he might stretch the scope of his set even further given his headliner slot. One thing’s for certain – it’s going to be an outstanding show.

Weekend passes for the XPoNential Music Festival can be picked up here; single-night tix for the Beck performance can be found here. To get a taste of the possible eclecticism in store, listen to our career-spanning Beck Spotify playlist here. And check out some videos and the full Firefly setlist after the jump.