Unlocked: The past, practice and perception that make Vacationer's perfect electro-pop - WXPN

Unlocked: The past, practice and perception that make Vacationer’s perfect electro-pop
News

Unlocked: The past, practice and perception that make Vacationer’s perfect electro-pop

Vasoli is leading practice for his electro-pop band Vacationer inside, down in his parent’s finished garage area that has been converted into a basement. Waters and beers are handed out. Guacamole and chips are set down in the corner of the room. It’s the first time the band coming together to run through their new live show – songs like “Stay,” “Go Anywhere” and “Shining” from their new album, Relief, released this week on Downtown Records.

The new tunes are quite audible from outside the house, but neighbors probably don’t mind chill serenade to their summer evening. Several years earlier there was probably much louder, angrier music coming from this house, as Vasoli started his career in popular pop-punk band The Starting Line, which formed in 1999 and disbanded in 2008, save for sporadic reunion shows and a recent tour.

Those who know Vasoli from those days may not recognize him now. His curly, chin-length hair is tucked beneath a backwards maroon Phillies cap. He’s surrounded by new band mates playing a new variety of instruments, a few of which would never be seen on stage for a punk show. But one instrument has remained through Vasoli’s time spent in both bands – his soothing, very distinct vocals. 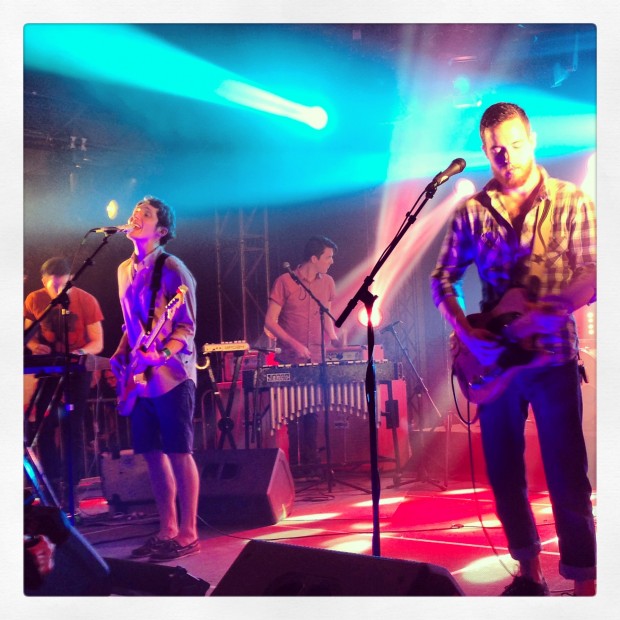 “My favorite is when [fans] say, “You sound so much like that guy from The Starting Line,’” recalls guitarist Greg Altman of various Vacationer shows since the band started touring more than two years ago.

“It’s happened more times than you would think,” adds Vasoli. “What’s that Val Kilmer movie, The Saint? I’m like The Saint of emo.”

Though Vasoli’s comment definitely was not meant in the context, early 2000 Starting Line fans might have considered him a “saint” of the genre. The music Vasoli was moved to make more than 10 years later couldn’t be more different than what his admirers might have expected from him, but they and other fans have seemed to latch on to Vacationer, no questions asked.

“I’ve really started to embrace the whole emo back story thing, because at this point, I’m confident enough in the music that I make with Vacationer and we’ve sort of cemented some fans in there enough for me to be little more confident in who I was and who I am,” Vasoli says. “It’s nice, I don’t really have to compartmentalize too much anymore, or keep anything a secret anymore, because the people who are into it are into it, and the people that aren’t are just kind of waiting for another one of those records. With anything else in my life, I like not focusing on the past too much, and also not on the future.”

Living in the moment is an idea that Vacationer holds dear, and that comes out on Relief. Chill vibes are one of the band’s major influences, mixed into the musical cocktail that also includes LCD Soundsystem, Curtis Mayfield, traditional Polonesian records, and exotica and soundtrack music from Percy Faith, Les Baxter, Martin Denny and Stanley Clarke. Throw in elements of hip-hop and electronic dance music, and you have the tunes that songwriters Vasoli and Matt Young and Grant Wheeler from Brooklyn-based band Body Language are happy with – the ones that make people dance.

“There was a part of our old set that was just a whole bunch of bangers, then it was just six or seven slow songs. It was like, ‘OK cool. Now we’re going to play the slow songs,’’ says Young, who switches between keyboards and vibraphone in Vacationer’s live band. “Everybody loves it, but it makes you want to write more tracks that people want to dance to and sing along to.”

“It made us think about what kind of band we really wanted to be, too,” adds Vasoli.  “It’s a decision to be able to be like that Beach House, everybody-just-chill-out-and be-cool-with-that kind of band. It’s really nice to be a band that walks the line of a dance act because then it’s a nice gratification when you see people dancing, because you know you’re music is working.”

For as much as Vacationer values spontaneity, they also value leisure and music’s ability to provide an escape. It’s not only the quality the band built its name on, but also its whole mantra and way of going about business.

It’s hard to discern this, though, from the way the band practices in the Vasoli basement. They play through take after take of the new songs until each band member sports the slight glimmer of sweat on their brow, and Vasoli’s voice starts to lightly crackle and fade. But the amount of jokes made and laughs had are the major indication that the members of Vacationer find a way of to turning work into play.

“I think the line that people draw between work and leisure doesn’t really have to be there all the time,” Vasoli says. “I understand that people need to make a living and need to put their nose to the grindstone to get by. But I think a lot of people keep playing the game just to keep scoring points. … I probably like to relax more than some people are comfortable with, but I like to promote it because when you just sort of zoom out, there is nothing really to worry about. It’s all just these little micro things that you create for yourself, and then you get worked up about it. But if you can just tell yourself to relax every once in a while, then, at least for me, it really works. So I like to nudge people that way if I can.”

Despite this emphasis on relaxation, Vacationer still tries to steep their music in reality. Young says that Relief delves a little deeper emotionally than the band’s first LP, 2012’a Gone.

“It’s not quite as surface,” he says. “I think the songs have almost a forlorn quality. The first record was just more, I don’t want to say two dimensional, but I think it stayed on the surface. As far as emotional qualities, I think this one goes a little deeper and I think it will promote people to think about their lives a little more. I hope so, at least.”

Relief and the rest of the Vacationer canon also inherently makes most listeners think of the summer months. The band hopes, though, that their music can be experienced and enjoyed universally, rather than seasonal. 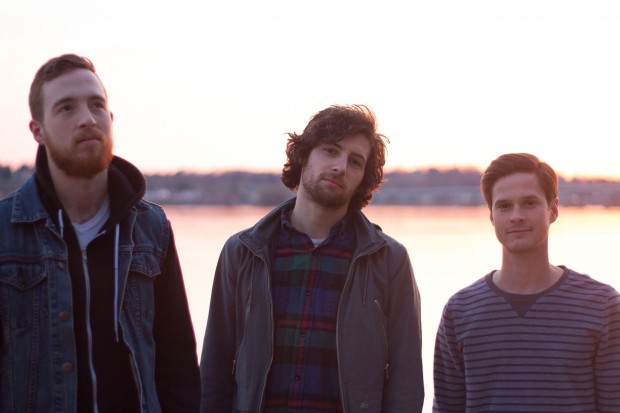 Vacationer enjoys the sunset along the Susquehanna river, before their show in Harrisburg. | Photo by Jeremy Zimmerman | jeremy-zim.com

“I hope it’s not too seasonal that they only save it up for summer, but even if they do I’m totally cool with that because there are some records that I totally do that with,” Vasoli says. “Those are some of my favorite records. It’s kind of nice to be able to break them out, it’s like your shorts, like I finally get to where this.”

“I think it’s the opposite though, I think people listen to it in the wintertime because they want the summer so bad,” adds Young. “When I work on these tracks, it’s mainly in the wintertime. I miss the outside, and I’m just listening to these exotica, topical records and I’m like, ‘Oh man, I just want to be in this mindset for like a day, and work on something that just takes me to another place. ’”

The two joke that they wouldn’t even know how to write “winter music” together. They also don’t know where they’d be without programs like Logic for recording and Ableton for performing live. Both help provide the layers of strings and winds and other elements of Vacationer music that the band wouldn’t be able to incorporate otherwise.

“I like to think it’s like the sixth member,” Young says of performing with Ableton, which allows them to trigger the specific desired effects without the rigidity of straight backing tracks. “It’s doing all the stuff that we can’t possibly do. Music budgets nowadays are not what they were in the past. If we were in the ’50s, and we could hire a string orchestra and a 10-piece wind ensemble, I would be all for getting rid of all of this, and adding another percussionist and some one just to do the electronic stuff. It would be amazing, but it’s just not possible.”

Whether you’re hearing Vacationer music during a live performance or inside a basement in Horsham, or whether or not you know about Vasoli’s punk-saint past, there’s definitely one thing that’s never a part of the mix: ego.

“There’s not a lot of elitist, chip-on-our-shoulder stuff going on,” Vasoli says. “I’m always very grateful if people are going off. I can’t have a poker face, I’m always just like, ‘Woah this is crazy!’ I don’t have the rock star thing to have the mystique or gravitas that some people do, like ‘What’s going on in his head?’ For me, I just can’t stop talking, I can’t stop cracking jokes. I’m sort of gregarious with it, and I think that it’s sort of a human thing, more than most bands. Especially for an electronic thing, I like when people show their personality through the microphone a little bit. I think we do that when we’re playing.”

Relief is the featured album in this week’s edition of Unlocked. Download “In The Grass” in Monday’s post, read Tuesday’s album review, watch a live-video roundup from yesterday’s post and check back tomorrow for a Q&A with the band about their daily lives.