A pop-punk night to remember with Say Anything, The Front Bottoms and more - WXPN

A pop-punk night to remember with Say Anything, The Front Bottoms and more
Events

A pop-punk night to remember with Say Anything, The Front Bottoms and more

The Jersey four-piece rocked out singing numbers off their brand new EP, Rose. Lead singer Brian Sella told the teeming and enthusiastic audience “I can already tell this is going to be one of those shows that I’m going to remember the rest of my life.” He does a great job making a personal connection with the audience, taking selfies with them and making sure to look and smile at every person in his field of view. The band fired off its custom-made wacky waving inflatable flailing-arm man for the last couple of songs, and members of You Blew It! joined them onstage too, thrashing around and jumping on top of one another, picking up cymbal stands and banging them on the floor. And the crowd relished in all of it.

Following the craziness of TFB, headliners Say Anything took the stage. The band is touring is support of their new album Hebrews, out this month on Equal Vision Records. As a big Say Anything fan spiraling back to their album Is a Real Boy, I was hoping to hear all the hits from that record, and was only somewhat satisfied with a few majors fell short. Stand outs from the set included “Spider”, “Wow I can Get Sexual Too” as well as “Do Better” from their self-titled album. During the song “Cemetery”, lead singer Max Bemis’s wife, Sherri Dupree of the pop band Eisley came out to contribute guest vocals along with their adorable daughter, a rock star in the making for sure. Say Anything continued to rock out, led by Bemis’s powerful frontman vibrato. During the encore, he even pulled out an acoustic solo cover of ‘Ol Dirty Bastard’s “Got Your Money”. The evening ended on a high note with every band from the night joining Say Anything on stage to belt out the song, “Belt”. With a lot of friendship, a lot of sweat, and a whole lot of screaming, all of the performing bands put on a rad show that gave everyone in attendance – in the crowd and onstage – an evening to remember. 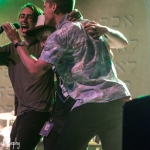