By John Vettese
July 16, 2014
05:07 PM
Share
Jennifer Pague of Vita and the Woolf dances to Aphra | Photo by John Vettese

If you’ve ever gone to a concert, you’ve no doubt heard clapping.

I’m not talking about the kind that comes at the end of a song, but the kind that comes during – an audience fervently clapping along to the beat. Happens pretty regularly, right? How about this: when was the last time you heard an audience keep those claps up beyond the first verse? Usually once the beat kicks in or the refrain come around, the hands fall and the crowd just sways or stands there. It makes sense; your fingers start to sting, or your arms start to ache, or you start to feel self-conscious when you realize how many people around you are no longer doing it. Maybe a handful of times a year, at concerts with a really devoted fan base, do I see the clap-percussion continue into the middle of a song, and even then it peters out. 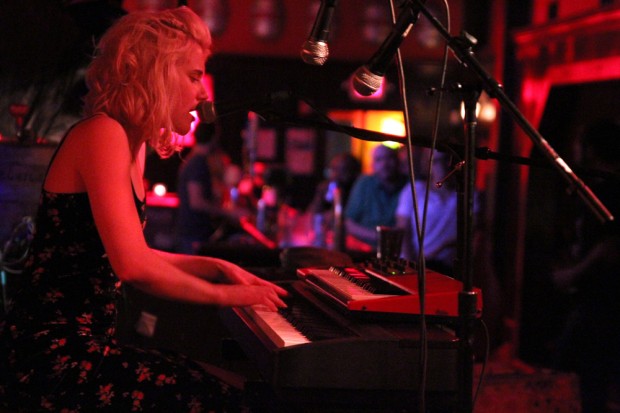 Vita and the Woolf | Photo by John Vettese

Taking it a step further: have you ever heard an artist get their audience clapping along to a song, and continue clapping for the entire thing – verse / chorus / verse / chorus / bridge / chorus / coda? I’ve been going to concerts for 20 years and had never seen this phenomenon occur prior to last night, when Jennifer Pague of Vita and the Woolf played a solo set at Ortlieb’s.

To give a bit of context: the eclectic art-pop tones of Vita have captured our collective ear over here at WXPN, and for good reason. The band’s first single “Mary” is a rousing anthem that fills a void Florence and the Machine left in my listening habits. Stopping right there, let’s acknowledge that Pague probably gets this comparison all the time, is probably sick of it and possibly not even directly influenced by FloMac – but as a singer, she is undeniably strong and dynamic, a personality that is not timid in the least. Woman knows how to sing out, and sing out she does, whether backed by intricate and imaginative musical layers on the forthcoming Fang Song EP, or solo with a piano, as we saw her last night.

There’s more to Vita and the Woolf than the hyperdramatics that Florence Welch is known for, of course; the album (and her set) have more subdued moments that recall Beirut and Espers. Those songs are sweet, no doubt, but the ones that capture the energy of a room are the anthems. Which brings us to the clapping.

Pague launched into a solo piano of a song called “Mm Chka Mm” last night, and it was a rager. As the title alludes, this is a beat-oriented piece of music, and without her drummer, the song needed something driving it. So she urged the group of fans and friends clustered at the foot of the Ortlieb’s stage to give her a beat. They did. And the kept going. After the first refrain, I could hear that many clappers dropped off, and braced myself for the familiar pattern of trickle-off crowd participation. It didn’t happen. The claps swelled in volume again, dipped up and down but didn’t waver, even at their quietest. 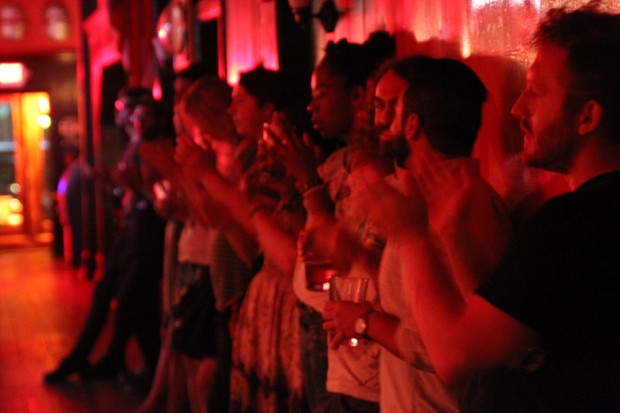 Vita and the Woolf | Photo by John Vettese

By the time we passed the second refrain, I started thinking “Is this going to continue all the way to the end?” I don’t know how many people watching were conscious of what was happening – maybe this is an uber-nerdy thing of me to notice, and I thank you, dear reader, if you’ve stuck with me this far. But when we neared the home stretch, the thing that gave it that final push and momentum came from the unlikeliest of places: a surly and somewhat inebriated Ortlieb’s regular who had been heckling the entire show thus far, and made his way to the floor in front of the stage – stomping and clapping momentarily as the song concluded. Woah.

Lest the point get lost, I’ll reiterate: this was just Pague and a piano. When Vita plays a full-band show for its album release in September, I can’t even imagine how high the energy will be.

Joining this solo incarnation of Vita and the Woolf was Aphra, the mystical deep soul solo project of Tutlie’s Rebecca Way. She hasn’t performed under this name in over a year, and in that time has re-imagined its sound an evocative electronic outfit anchored by her rich and melodic voice. As a singer, Way is undeniably influenced by R&B. But there’s a dark undercurrent to her sound, a coldness echoed in drum machine beats and electronic textures, in the urgent floor-tom rhythms she hammered out with Tutlie bandmate Asher Brooks. Lorde or The xx might be easy parallels, in that her music definitely pop, but not necessarily happy pop. “I wrote this song when I was depressed,” Way said during one introduction. “Actually, I write most of my songs when I’m depressed.”

Don’t be fooled. Aphra is anything but a downer. Way uses her music as a means of quiet catharsis, but it’s transformative, whether we’re talking about her smiling quizzically as Brooks struts to a trumpet solo, or members of the crowd (including Pague) slow dancing on the floor to a blissful late-set melody. Check out photos from the show in the gallery below.