The past year has been a busy one for the band, due to two, new, Camera Obscura babies [both front woman Tracyanne Campbell and bassist Gavin Dunbar welcomed sons]; as a result, the band is hitting the States just now in support of their 2013 LP, Desire Lines. But if the new material feels stale to them by now, they certainly didn’t show it, running through half the record with energy and workman-like charm: bouncing in place to “Do It Again,” then dialing it down slightly for calypso-tinged slow groove “Cri du Couer.” Normally a five-piece, the band numbered seven Saturday night, with the addition of a trumpeter and a second percussionist. 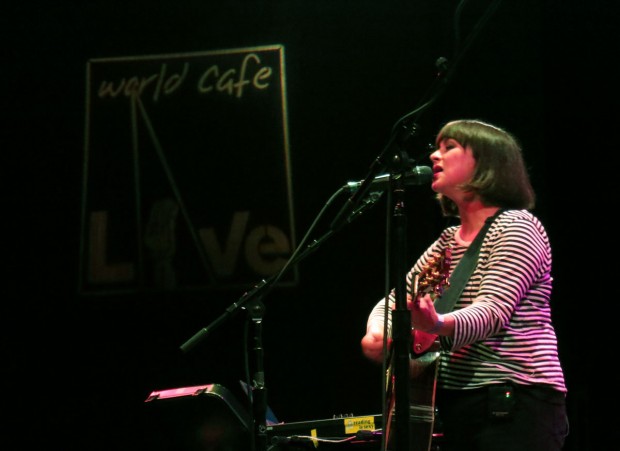 And while the whole band was on-point, it was front woman Tracyanne Campbell who really shone, and whose gorgeous, gauzy vocals—which can convey both sadness and euphoria in a single note—are a large part of what makes Camera Obscura so magical. Live, Campbell was just as mesmerizing as on record, her nuanced intonation lending the songs depth and breadth.

When I spoke to keyboardist Carey Lander the other week before the show, she revealed that it’s impossible to fully give in to the pain behind the songs night after night without burning out; instead, she explained, “You have to make it a song you perform for other people to enjoy.” Still, Campbell did such a good job replicating songs’ emotional highs and lows, I felt like I was experiencing everything for the first time, and left feeling strangely cleansed.

With so many earnest, summery tunes, it’s hard to pick faves—but I felt particularly exhilarated during joyous, summer anthem “Honey in the Sun”—and thrilled during swirling, twee standby “Lloyd, I’m Ready to Be Heartbroken.”

The band closed its set with a trio of old songs—“Come Back Margaret,” “Books Written for Girls,” and “Razzle Dazzle Rose”—but I swear I could’ve listened to them for another hour easily. Camera Obscura’s reality is warm, inviting, and invigorating; bathed in their tunes, I felt simply invincible.

Break it to You Gently
New Year’s Resolution
Let’s Get Out of This Country
Forests and Sands
Honey in the Sun
French Navy
This Is Love
Desire Lines
Cri du Couer
Everyday Week
Do It Again
It Looks Could Kill
Lloyd, I’m Ready to Be Heartbroken
Country Mile
My Maudlin Career