Epic (adj): heroic or grand in scale or character. It is perhaps one of the most over- and misused words in the English language. Yeah, that grilled cheese may have been tasty, but it wasn’t quite as monumental as Odysseus. But I’ll tell you what was epic: English prog-rock legends Yes’ concert at the Tower Theater. It would have been easy to doubt a group whose 46 years together do not by any means belie them, not to mention that founding singer and frontman Jon Anderson left the group in 2008. I don’t think Yes cared about these things. When you’re the band that played the most attended festival-style show in United States history here in Philly (the “Spirit Of Summer ’76” show at JFK Stadium on June 12, 1976 for 130,000 fans), a few grey hairs (or more precisely, a full head of white ones, but who’s counting?) aren’t going to get in the way of putting on a show of, that’s right, epic proportions. 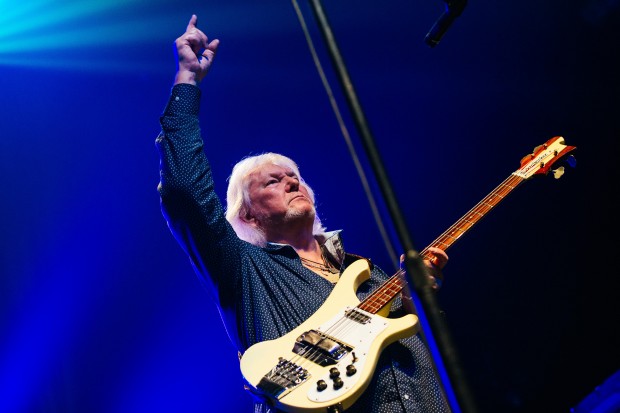 Yes opened up their extremely sold out Tower Theater show with their 1972 Close To The Edge LP played in reverse. What became immediately clear as they rumbled their way through “Siberian Khatru” was that Yes’ sound is massive, which has a hell of a lot to do with founding bassist Chris Squire’s bold playing (and as it happens, his appearance isn’t much different). And while guitarist Steve Howe may have gained a few wrinkles here and there, his hair is as long as ever, and more importantly, he still knows his way around a guitar like his 5 consecutive “Best Overall Guitarist” victories in Guitar Player magazine would suggest. That, or the 3,000-odd fans bellowing out their love for him during the intricate flamenco guitar solo piece that is “Mood For A Day”. Oh, and Jon Anderson’s replacement, the similarly named Jon Davison, wasn’t half bad. Wait, scratch that. He was, to use appropriately English lexicon, bloody amazing. I can honestly say that I have never seen a frontman gesticulate, prance about and sing more passionately that Davison did. His oriental patterned shirt was pretty cool too.

After playing a couple new songs, both of which were decent enough, Yes made their way through all of the 1971 LP, Fragile. All of it. The thing about that album that I didn’t realize until I saw it live is that each song seems better than the last. Sure, the record’s opener, “Roundabout” was a hit, but “South Side Of The Sky” easily makes my top 10 guitar riffs list, and “The Fish [Schindleria Praematurus]” is probably the second best rock song ever to be written in 7/4 (“Money” by Pink Floyd takes precedence in my book, and so would Led Zeppelin’s “The Ocean”, but that song isn’t really in 7/4). They encored with the timeless classic, “I’ve Seen All Good People”, which, come to think of it, includes one of the best 3-part harmonies known to rock & roll. As for the final encore, “Starship Trooper”, I’m going to have to refer you back to the beginning of the review, because no word describes it better than “epic”. Keytar and guitar (or should I say, geetar) solos from Geoff Downes and Steve Howe respectively were unbelievable. I left the room in shock. Yes still rocks.