The Other Repo Man: A look at the life of Repo Records owner Dan Matherson
WXPN Local

The Other Repo Man: A look at the life of Repo Records owner Dan Matherson

“We’ve been open, what, 26 years now?” His voice goes up at the end as if he’s asking me. Of course, Dan Matherson is aware of how long his store has been open. He’s just being modest, which is impressive given that he owns and operates a record store, selling music in a physical format even as the industry trends digital.

The first Repo Records opened in 1986 in the main line suburb of Wayne. The side street it was located on was the best location Matherson could find given his tight budget. “The rent was so cheap, like, $400 a month,” he says. The slab of real estate wasn’t the best, but Matherson was able to draw in customers by advertising on train stops and fliers posted around the locality. As his business expanded, he relocated to a second site in Bryn Mawr, where business took off. Eventually, he was able to open a second store on the 500 block of South Street in Philadelphia – the main hub for Repo since the Bryn Mawr location closed in the mid-aughts. 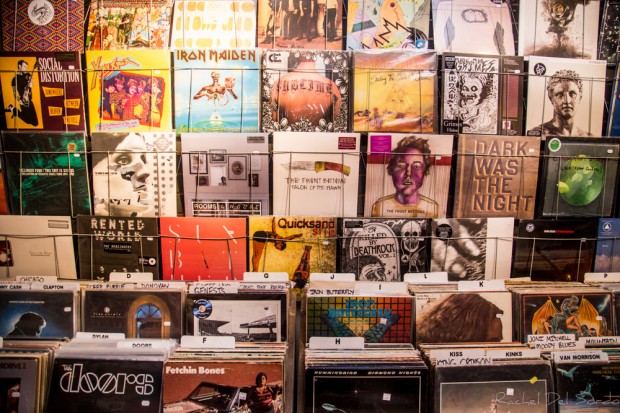 Matherson grew up in Devon, an area in which the few existing record stores were chains, which typically sold whatever was at the top of the charts that week. However, New York was his home away from home, and it was there that he would frequent record stores of a different type. The record stores in New York didn’t care about what was popular. They sold what was good. Knowing there was nothing like this in his Pennsylvania suburb, Matherson found his calling.

He nicked the store’s name from the 1984 movie, Repo Man. Given the movie’s punk rock soundtrack featuring artists like Iggy Pop and Circle Jerks, he figured it would make a good name for his store, which specializes in punk and underground records.

Matherson is a huge fan of punk; he loves bands like Joy Division and The Buzzcocks. In 1981, he traveled to New York to see The Clash play at Bond’s Casino, which he described as “one of the greatest things I’ve ever done.”

As he lists some of his favorite bands, it’s clear he’s quite the rock and roll connoisseur. He gravitates towards lots of new wave bands from the late 70s and early 80s such as Wire, The Teardrop Explodes, and especially The Chameleons. In fact, Matherson helped organize a Chameleons concert at J.C. Dobbs when he found out the band had no Philadelphia dates on its 2006 American tour.

However, Matherson follows the rock music scene today just as much as he did in the 70s and 80s. Lately, he’s been digging lots of Arcade Fire and the Wooden Shjips. Albums Reflektor and Back to Land by Arcade Fire and The Wooden Shjips, respectively, were both released in November, and are, of course, for sale in his South Street store.

In an era where many of the older generations feel as if the time for great music has passed, 53-year-old Matherson stays relevant. In addition to Arcade Fire and the Wooden Shjips, he listens to bands like Chvrches, Four Tet, and Poliça, all of which have a drastically different sound than the punk rock bands he grew up listening to.

He welcomes the 21st century’s changing music styles, rejecting the notion that popular music’s best days are in the rearview mirror. “It’s not true,” he says. He believes today’s music is “better than it was 4 or 5 years ago,” and that those in his generation haven’t made enough of an attempt to go out and look for good music. When the subject of radio comes up, for the first time, he raises his voice, showing his displeasure with people who he feels do an injustice to music. 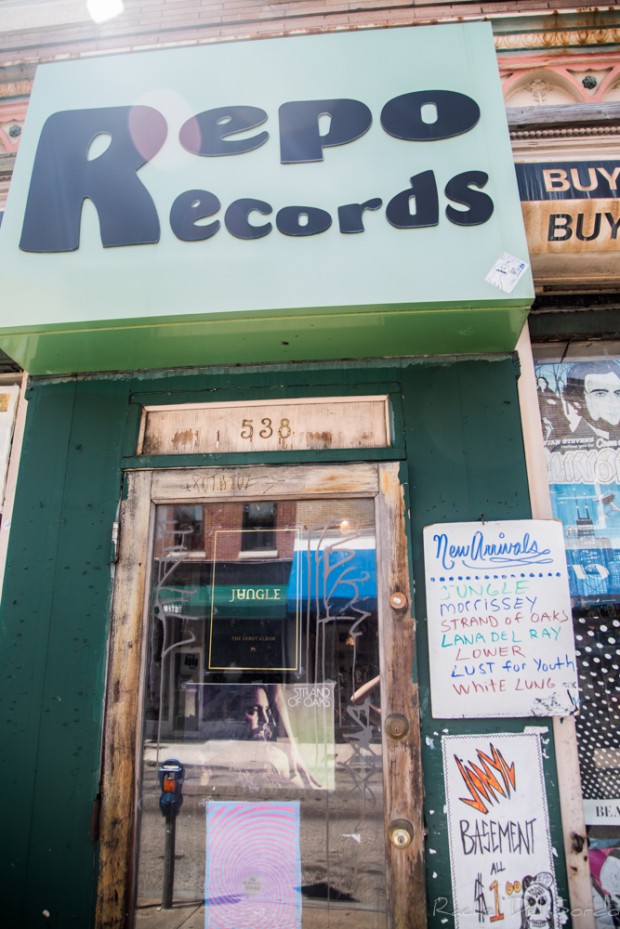 “They never play anything new. They know what makes them money and they stick to it.” For this reason, he prefers college radio stations over commercial radio. “They play some good new stuff once in a while.”

Matherson is old-school in the sense that he appreciates the concept of a tangible album. He hates the fact that some artists “get big these days by writing two songs,” while the rest of the album is just filler. He believes there is something to be said about listening to an album all the way through.

Although he believes MP3 downloading is primarily to blame, he does see the convenience aspect of it. Matherson keeps mp3s on his iPhone, which he uses while driving or when he’s away from his record player. Still, he prefers the sound of vinyl. “The sound quality is way better,” he says.

It was about 4 or 5 years ago when a number of record stores around the city began closing. “At the time there was about 8 or 9 record stores in the area, and now it’s down to only about 2 or 3.” Matherson took notice of how badly the failing compact disc industry hurt his competition. “I didn’t think we were going to make it,” he admitted. However, not soon after, a glimmer of hope ensued in the form of a conspicuous spike in vinyl sales. At the time, only about 40% of his stock were vinyl records, with the remaining 60% being CDs. Since then, he’s been forced to allot 80% of his retail space for vinyl records with the remaining 20% for CDs.

According a report in to the Christian Science Monitor, vinyl sales were up 16% last year, and 36% the year before. Why the spike? “It’s not all about the sound quality…It’s more intrinsic than that,” says Jason Zallie, a 21-year-old West Chester University student who is also a dedicated vinyl collector. “You appreciate the music more when you get to flip the vinyl and actually set up the sound system.” In addition, he stresses that “It’s also about supporting the artist.”

Zallie’s outlook falls right in line with what Matherson thinks of most of his customers. Matherson describes them as people who not only “want to support the artist,” but “want to support us.” Many customers ask why the cost of CDs are higher than what they can get them for at an online retail store like Amazon. Simply put, the prices Amazon sells for are the prices Matherson buys for. As a result, it’s Matherson who has to sell his CDs for a bit more than what a customer can buy them for somewhere else in order to stay in business. “The customers know that. They’re willing to pay a little more [to support their local record store].” For this, Matherson is very appreciative. “If it wasn’t for them we wouldn’t be in business.”

Although vinyl’s comeback has surprised many, what is perhaps even more surprising is the albums that sell the most. “We sell more Led Zeppelin and Pink Floyd records than we ever did,” says Matherson. “The old mainstays sell all the time. Smiths records sell. Same with Queen, the Grateful Dead.”

Given the nostalgic feeling a vinyl collector gets from purchasing a record, it makes sense that collectors appreciate music recorded in the pre-digital era. Many feel you have to listen to analogically recorded music on a record player in order to get the full experience. In fact, Led Zeppelin guitar player Jimmy Page recently said that a lot of his band’s recordings “sound ridiculous on mp3,” and that you “can’t hear what’s there properly.”

For reasons like these, the sound quality of vinyl will always prosper over the sound of MP3 downloads. Whenever analog music is converted into a digital format, it will always curtail the recording’s sound quality. Luckily, the economy is furnished with a supply of vinyl collectors that have the ear to tell the difference and the gratitude to pay the extra dough.

This fact keeps record store owners like Matherson happy. As long as there’s a demand for high-quality music recordings, he’ll not only have the ability to share great music with countless amounts customers, but he’ll be self-employed, running a business in an industry he loves.