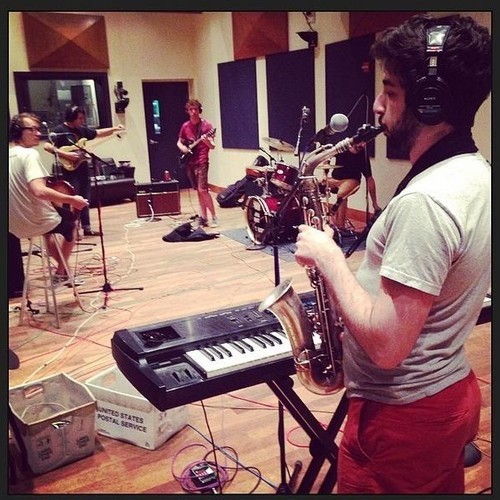 If you just went by Roof Doctor‘s irreverent personalities, their tongue-deep-in-cheek social media presence (Twitter handle: @roof_deezy), the fact that they once tried to start a beef with Conor Oberst, you’d have no reason to take them seriously. But consider their chops and multi-instrumental prowess. Chet Williams has a knack for juggling sax, keyboard, percussion, bass and vocals; Kevin Paschall delivers intricate rhythmic accompaniment from behind the drumkit (I’m still wrapping my brain around the beat at the beginning of “Bulldog,” which they played in their Key Studio Session); Mark Harper reigns in everything that’s going on and arranges it into ultra catchy tunes. These dudes are so serious. Relatively speaking, anyway. Earlier this year, Roof Doctor – which also features guitarist Alex Stackhouse and bassist Sean Reilly – released the Mobile Freedom Home LP, recorded over at HeadRoom Studios with Kyle Pulley, and the band promptly got a glowing writeup at Stereogum. Not too shabby for a debut. They’ve spent the summer playing assorted gigs around the city and beyond; upcoming shows include Friday, August 8th at Kung Fu Necktie; Saturday, August 23rd, at North Star Bar; and Thursday, September 18th, at Johnny Brenda’s, and information on all of these shows can be found at the XPN Concert Calendar. To get a taste of what their live show sounds like, check out performances of four songs from Mobile Freedom Home in their Key session below – which was guest engineered by Dan Hatton. In Harper’s introspective, self-conscious lyrics (particularly on “Home”), you might give a little bit of context for all that irreverence I talked about before. These are songs about frustrations, fears, insecurity and pain. They just happen to spin those topics into extremely playful, infectious pop.