Who was that guy impersonating Forrest Gump throughout XPoNential 2014? - WXPN

Who was that guy impersonating Forrest Gump throughout XPoNential 2014?
WXPN Local

Who was that guy impersonating Forrest Gump throughout XPoNential 2014?

You never know what you’re gonna get at a music festival. At least that’s what Paul Dengler wanted to make sure life was like at XPoNential this year.

Dengler, a Forrest Gump impersonator, was seen from Friday to Sunday watching performances, interacting with festival-goers and starting conga lines. 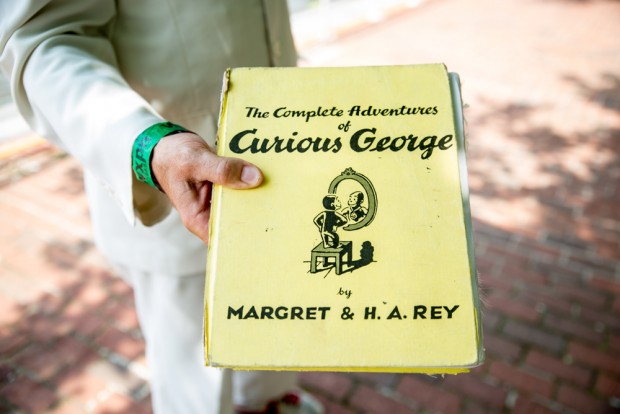 “Me and Lieutenant Dan, we like to travel around and go to all the music festivals and all,” Dengler said in character. “We heard the XPoNential music festival was a fine festival, so we decided to come.”

Ask Dengler to talk to you out of character, and you’ll find out that he’s a Montgomery County native who currently live in Nashville. He supports himself as a singer-songwriter and a visual artist, but has been doing Forrest Gump impersonating for years, mainly for the Bubba Gump Shrimp Company restaurant chain.

“I have found that the key to my success is doing festivals,” Dengler says as himself. “Going out and taking what I do directly to the people, handing out cards and interacting with people.” 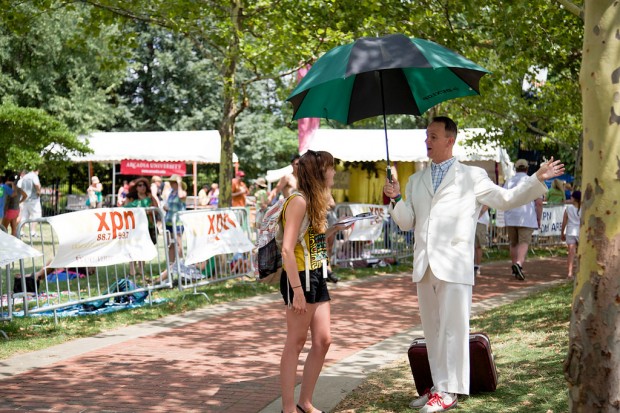 Dengler describes his own music as “New Orleans sounding,” and says he’s usually compared to Randy Newman. This weekend he enjoyed being a music fan, though, with favorite sets from the likes of Ingrid Michaelson and C.J. Chenier and the Red Hot Louisiana Band.

“I got a bunch of people from the audience to form a train behind me, and we were all doing the zydeco thing down to the stage,” he recounts of Forrest’s actions during C.J. Chenier’s set. “Then when we got to the stage, everyone who was on the train just spilled out and they were all dancing with me, so it was a lot of fun.”

Dengler’s next stop? Next week’s Musikfest in Bethlehem, where he plans to appear as Forrest Gump all 10 days of the festival.

“This is awesome,” Dengler says of XPoNential. “You can’t beat the location and the Philadelphia skyline.”