There’s something about old-school hip-hop that just oozes summer in the city—whether it’s DJ Jazzy Jeff and the Fresh Prince  celebrating chicks at Fairmount Park or Snoop paying tribute to his favorite bev—and the videos, with their beach chairs, bbqs, and wild block parties—only drive this home. Summer in the city is not like the other seasons: people go wild and indulge, as if their inhibitions melt under the summer sun.

West Philly rapper Chilly Moody is no stranger to summers in the city. The up-and-coming rhyme-spitter grew up in Philly, and has proven himself a master of all things SUMMER—whether ruling it on stage on the festival circuit, mixing up a perfect cocktail, or even (yes) having the coolest swim trunks this side of the Schuylkill. He’s also responsible for one of this summer’s flyest bangers, the bbq-ready “Concrete Jungle” – which makes a nice nod to Bob Marley, another summertime staple.

Every year to celebrate summer, Chill hosts a #nicethings Weekend (#nicethings is his catch-all catchphrase), complete with bbq, bowling, and a pool party at a mystery location. This year’s #nicethings event runs August 22 through 24. Curious about the event—and his summer go-tos in general—I met up with Chill at one of his fave Center City bars, Time, to talk Will Smith, cocktails, and how he’d spend his ultimate summer in Philly.

When I arrive, Chill tells me he can’t have a drink, because he’s in the midst of his “100 Days Challenge,” an annual undertaking in which he abstains from alcohol for 100 days, in order to physically and mentally better himself. He demolishes some shrimp and grits though, and introduces me to pretty much everyone at the bar, including the bartender, Butters (not to be confused with this Butters), who makes me the best Old-Fashioned I’ve ever had. Later he shows off his customized Slingshot watch, with a detachable band that says #nicethings that he designed and sells on his website. For Chill, #nicethings isn’t just a weekend in the summer; it’s an attitude and lifestyle that lasts year-round.

In between slurps of food and drink, we manage an interview; read on to hear about that time he got drunk with Ed Sheeran, and what the “concrete jungle” means to him.

The Key: So when I was brainstorming artists for this column, I immediately thought of you, because “Concrete Jungle” is such a summer banger. What was the idea behind the song? Did you set out to write a summer anthem specifically?

Chilly Moody: Yes and no. The song went through so many stages—it originally started with [collaborators] JoeLogic and Dilemma making a beat and Dilemma just sort of humming this melody that became the hook. He wasn’t singing any words—but to me it felt like he was saying “Concrete Jungle.” So we built it aroundthat idea. One of my main goals is to write about things that people can relate to—and I think that anyone who grew up in or lives in the inner city can relate to that idea of a concrete jungle. The jungle is like a fight; it’s a hustle. You want to LEAVE the jungle, but at the same time you accept it if you’re there.

So anyway, we had the idea and later I linked up with [guest rapper] Mack Wilds and played it for him. And he helped me flip a few things around…and then we sat with that for a while. That was probably back in November or December…I remember because we recorded his part at like 4 in the morning. He showed up after a show, I took him to get a cheese steak, and then he had to be up early the next morning to perform at the tree-lighting ceremony at Macy’s. As we were working through it, we were deliberately trying to personify that energy of the jungle. And I think that’s when I realized it could be a summer banger.

TK: I think there’s something about hip-hop with that old school feel that just screams summer…

TK: Right? I was trying to figure out why. I think there’s something nostalgic about it probably, because we listened to it growing up—but there’s also something about that windows down, volume up feeling that’s just so good. What do you think are some of the quintessential summer jams? What makes a perfect summer jam?

CM: Well you got your obvious summer anthems of course—“Hot Fun in the Summertime,” “Summertime” by Will Smith & DJ Jazzy Jeff; just anything that makes you want to roll your windows down and ride around letting people know: you’re listening to the summer anthems. That’s what you want to hear.

Then you also got your old-school records that you wanna two-step to; that you want to drink something cool too and just vibe out to. I’m talking like the O’Jays, The Eisley Brothers, Earth, Wind, & Fire, Frankie Beverly. Then you got old skool hip-hop joints like Snoop, “Gin and Juice” or The Chronic or anything West Coast from around that time. A lot of those records mean summer to me.

TK: I think so too. And whenever I picture those old music videos, they’re always shot in the summer. They’re never wearing coats and stuff—they’re always in like, bikinis.

CM: For sure. I remember the Dre video for “Still D-R-E” being sorta an ultimate summer jam. Those videos definitely give you context; they give you something to imitate. So when I see Snoop and Dre riding in the ’64…and the ‘64 is bouncing…I can’t wait to play their song and do the same thing they’re doing. It’s smart marketing, really.

TK: I’d agree!  And talking about smart marketing, let’s talk about your #nicethings weekend. Sorta the ultimate summer party. Where did this idea come from?

CM: It’s maybe 5 years in the running? Maybe 6. It was originally called EST Weekend; EST stands for “The Establishment,” which is what we call all my friends. This year is actually the first #nicethings weekend. It started as just a cook-out, and then we expanded to a weekend: cookout, basketball game, and bowling. This is the first year we’re doing a pool party. It’s just a chance to hang out in an environment that’s not a concert setting: just chill with Chill and connect with some of the fans.

TK: It must be a lot of work to put together!

CM: Oh yeah. It’s even more work each year, because people come expecting something bigger and better than in years past. This year we have sponsors, because I don’t want to have a cookout and not have enough burgers to feed everyone. I’m not ashamed to admit that my stature might be outgrowing my income at this point [laughs]. It increases the workload, but it’s worth it.

TK: So tell me about the bowling. Are you a big bowling fan?

CM: Oh yeah. That’s why we do it. We’re pretty good. My friend Jay from the #nicethings crew bowled 3 perfect games in the past year. We all bowl. We bowl in leagues. I have like three bowling balls; I have the shoes and everything. It’s a leisurely sport, and it’s a drinking sport. I like that I can interact with people. It should be fun. 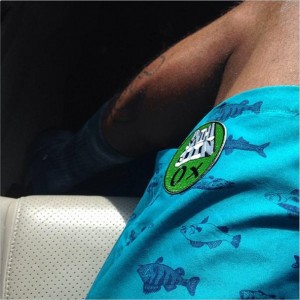 TK: And what about the pool party?

CM: The pool party is going to be special. It will be invite-only, and people won’t know the location until the day of. And we’re going to try and make sure it’s not tweeted out, or instagrammed out. It needs to remain secret.

TK: Sounds bad-ass. So speaking of pool parties and Instagram—I noticed on your Instagram that you were sporting some pretty sweet Chill Moody swim trunks. Are you going to be wearing them for the pool party?

CM: [laughs]. Sure! I made those the other day to go jet-skiing. I ordered a bunch of Chill Moody patches so I could start customizing things. So I made some trunks. I’m thinking of making some #nicethings bikinis for the girls. That could be cool. Girls like nice things.

TK: I admit I do! So let’s talk summer in general. How do you like to spend your weekends in the summer in Philly? What are some of your favorite things to do?

CM:  Summer is a great time for concerts and being outdoors. I go everywhere in the summer—all the big shows like the Roots Picnic, July 4th, Made in America—plus the night markets, and food festivals, and beer gardens. Everything for me is music-related though, even if it’s not a music event specifically. If I’m there and I’m not performing, I’m taking notes about what’s going on; I’m meeting people; I’m trying to get on the same stage next year.

TK: What are some of your favorite sets you saw this summer?

CM: Action Bronson at the Roots Picnic was definitely a standout for me; also last month I was lucky enough to perform with Mack Wilds at Penn’s Landing—that was really cool. I was on stage for maybe 20 minutes, and the crowd was just crazy. So that was dope. And I gotta say—Ed Sheeran at 4th of July. Well, from what I can remember [laughs]. I’m kinda a fan boy. I found a picture of me and Ed Sheeran in my phone a week later that I do not remember taking. And then it all started coming back to me. We were talking for 20 minutes about The Game, the rapper. Ed is a BIG fan. I started my 100 Days Challenge the day after [laughs].

TK: I never would have pegged Ed as a fan of The Game! So how is playing a big show like the Roots Picnic different from a solo show at the Hard Rock or something?

CM: Everything is different. It’s a different approach. For a big show we want to do more crowd participation, get people riled up, whereas for an intimate show I want it to be more personal. I want to talk to my fans and get them excited so that they come to the festivals [laughs]. My energy is the same for both though—I always go hard.

As for preparing for the shows—festivals are their own entity, and people are going to come for the festivals. If you’re going to the Roots Picnic, you’re probably going to see Janelle Monae, and maybe you stumble upon Chill Moody. For my own shows, I’m personally pushing it. For my show at the TLA I sold tickets on the streets for weeks, months beforehand.

TK: So I hear—through the grapevine—that you’re a pretty good bartender. What’s your go-to summer drink?

CM: To make: a glass of whiskey [laughs]. To drink: Jameson on the rocks with muddled limes.

TK: That sounds like a very dangerous drink! Now time for some either-ors?  Beachside or poolside?

CM: Hmm. If I’m at the beach, it’s because I’m on vacation. So I’m going to say beachside. I don’t like sand that much though.

CM: Corona. With a lime.

CM: Jazzy Jeff & The Fresh Prince!  I’m from West Philly, so I am obligated.

TK: Fair enough! Thanks for meeting with us, we can’t wait for the big weekend.