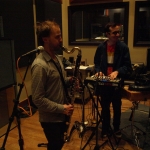 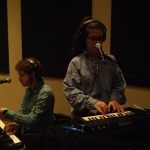 Back at the end of 2012, Folkadelphia recorded a stripped down set in the auxiliary broadcast room at WXPN with folk goddess Anais Mitchell. During this session, we met an excitable, highly passionate, and imaginative individual named Ben Davis who was playing in Mitchell’s band (alongside Rachel Reis). As they played, we were privy to just a glimpse of the insane brilliance that Davis brings with him everywhere he goes. He also told us about his own project Cuddle Magic. How could we not listen after all of what we witnessed?

Fast-forward to this year and I’m a full-fledged Cuddle Magic proponent. Perhaps you’ve tuned into Folkadelphia Radio or checked out our sites and heard tracks from their album Info Nympho or the recent collaboration with Phyllis Chen. You may not not known what to make of this left-of-center, totally off-kilter, definitely unclassifiable brand of pop-ish, electro-ish, groove-oriented, sometimes gentle acoustic-y, sometimes driving rhythmic melange. What’s it doing on a program called Folkadelphia? Simply answer: songwriting, man. My favorite aspect of Cuddle Magic is that I never know what’s coming next, I cannot predict what sounds taken from what seems like any and every instrument will crop up next. A Steve Reichian repetitive figure in the bass clarinet blends seamlessly into a blissed out pop groove. A bit-crushed synth-rock section cuts out leaving angelic harmonies. This music is highly adaptable – it works at a bar, it works at a club, it works at a listening space, a basement, a mansion yard (as we just witnessed), and on record. What can we expect from Cuddle Magic in the future? Well, the unexpected of course!