Cut Chemist, né Lucas MacFadden, doesn’t just make beats. He makes vibes. The DJ, producer, and mix-Master (with a capital M) has been soundtracking moments for 20 years now. He got his start with boisterous underground rap crew Jurassic 5 (remember them?)—then also took turns in Latin-funk band Ozomatli and Less Than Jake (yes, really)—in addition to creating his own, mind-blowing jams.

Throughout the years MacFadden has worked closely with fellow DJ and like-minded artist Josh Davis—a.k.a., DJ Shadow. The pair has released four live records together, and share an affinity for creative yet effortless beats. This Saturday, they’ll team up at the TLA for their “Renegades of Rhythm” tour, featuring the music of hip-hop progenitor Afrika Bambaataa.

The project is in collaboration with Cornell University, who are digitizing the entire mass for their Hip-Hop Collection, something apparently real that sounds awesome. In advance of their performance, we rung up Chemist—to talk record collecting, live mixing, and his favorite record shop in Philadelphia (hint: it’s probably one you’ve never heard of!)

The Key: Thanks for chatting with me!  We are so psyched for the show tomorrow. Can you tell me a little about how you became involved with the project?

Cut Chemist: Johan Kugelberg is an art collector out here in New York who has been acquiring hip-hop artifacts and brokering deals with Cornell University for their hip-hop collection. And his latest acquisition was the Afrika Bambaataa record collection. So to commemorate this archive he reached out to me and Shadow to do a mix. And after talking about it, we decided it would be better to tour, to really bring the project into focus. And now we’re here! 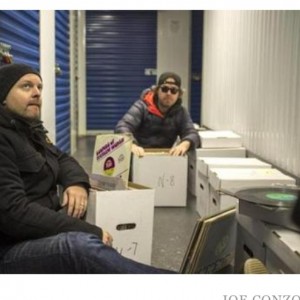 Surveying the collection with DJ Shadow (photo via Facebook)

TK: What about Afrika Bambaataa or his sound in particular drew you to his music? I’m guessing you have been a fan for many years before this tour.

CC: Back when I first heard it, it was unlike anything else I had ever heard. I had never heard electro or hip-hop—it was very sci-fi and very conscious and very street at the same time. It had all these different elements going for it. And at the time, being young, I was very enamored with the whole culture of break dancing and graffiti, and his music embraced all of it.

TK: So I’m jealous that you got to dig around in his 40,000 records. What were some of the coolest or most unexpected items you found?

CC: Well, for one I didn’t expect to find my own stuff in there—that was a trip. And also incredibly validating and an honor. Otherwise there wasn’t anything else too unexpected—I knew he had eclectic taste, so nothing really surprised me from African to calypso. I was just excited to get to sort through it all.

TK: So I’m guessing you don’t lug all 40,000 records to the venue for each show—how much do you preselect what you’ll play live? How much do you and DJ Shadow coordinate?

CC: The whole show is well-scripted and well-rehearsed. We pared it down to about 250 records.

TK: Is there a thematic or narrative flow to the show?

TK: That sounds awesome!  So tell me a little about the visual component of the show. I heard you’ll be paying tribute to Bambaataa using visuals and projections as well. How does this work, and how did the idea come about?

CC: We have our visual guy you we usually use, Ben Stokes, who curated some production pieces—animating a train going through the Bronx or Bambaataa on the street, for example. We gave him old photos to scan and he would turn them into these incredible production pieces. Many of the photos came from Joe Conzo—he’s  a photographer who took these wonderful old photos documenting hip hop in New York back in the early days. And we gave these photos to Ben and he would somehow turn them into 3-D, moving productions. So we use that.

We also used a lot of the record covers we scanned. We found them one after another just flipping through the covers and seeing how tattered they were. We liked this idea because that’s what the set is really about—we’re using his records. So it’s nice to see them full-frame on the screen. And of course there are cameras on us as well. 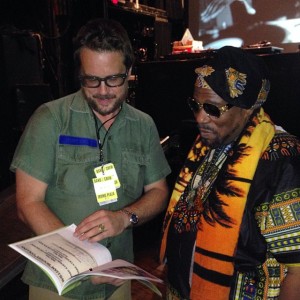 Bambaataa (right) with Johan Kugelberg in NYC (photo via Facebook)

TK: Sounds like quite the set-up!  So you’ve played three shows so far—what has the response been like?

CC: It’s been amazing. The sets were tight, and the crowds were good. Last night was my favorite though because Bambaataa was actually there.

TK: Oh wow! What did he think?

TK: Did he have any insight into the creative process, or did you and Shadow do the whole project independently?

CC: We did it independently, so it was his first time seeing it.

TK: So it’s been a while since you DJ’ed in Philadelphia. Do you have any specific memories of spending time in Philly or anything you’re looking forward to doing in Philly?

CC: I was just here with Jurassic 5 about a month ago. I love Philly. It’s one of my favorite cities for buying music. I’ve been buying music in Philly since 1986.

TK: Where are some of your favorite places to shop?

CC: Back in the day I loved Funk-O-Mart, on Market Street. It was awesome. There were just so many random places—a lot of them are probably gone now, as I know a lot of record stores have closed. But back in the day it was amazing.

TK: Did you do any record shopping when you were in town with Jurassic 5?

TK: Do you care to share what you picked up?

TK: Ok, fair enough! So what’s coming up for you after this tour? Do you have anything else on the radar?

CC: No. This is my third tour back-to-back so after it’s over I’m going to find a nice little island somewhere and lay down for about a week.

TK: So is there anything else you want to add, or share before the show tomorrow?

CC: Just that this is one of the biggest deals of my life—just doing this show with this material for this guy. It’s a huge deal. I want to urge people to come out and see the show. In addition to all else, it’s a great history lesson in hip-hop and contemporary music. Because [Bambaataa] is responsible for so much of it, and how it’s being shaped to this day.

TK: We can’t wait to experience it live!

Cut Chemist and DJ Shadow play the TLA, 334 South St., on Saturday, September 6. The all-ages show starts at 8 PM and tickets are $29.50; more information can be found via the XPN Concert Calendar.