It’s been a year since Lorde’s “Royals” topped the musical richter scale, and her streak of teenage stardom has shown no signs of slowing anytime soon. Her show at The Mann Center last night kicked off a second US tour in support of her subsequent Pure Heroine LP, which still has some fans reeling. My first foray into the kingdom of Ella Yelich-O’Connor was thanks to her staggeringly intoxicating performance at The Tower Theater last March, of which I wrote:

It’s easy to doubt that Lorde’s success will continue, especially given the almost absurdly widespread popularity of “Royals”, but her show at The Tower convinced me otherwise. To begin with, she’s an excellent songwriter, and her lyrics address some difficult issues. Her voice, even regardless of her age, is one of the richest, most unique instruments out there. Lastly, Lorde puts on a remarkable show, even if her dancing is a little, well, different. Lorde is one of those rare instances of a truly complete artist, and I doubt this is the last we’ll be hearing of her.

True to my (not-so-bold) prediction, I again found myself amidst a sea of the queen’s subjects drowning in anticipation of what would turn out to be a stellar performance.

Lorde kicked off her 15-song set in what I assume has become habitual (and appropriately minimalist) fashion, taking a dark stage bereft of distractions and, line by line, letting the audience nibble at the opening verse to the Gen-Z anthem that is “Glory And Gore” before dropping the curtains behind her to reveal her powerful white-clad synth/drums backing duo. “Tennis Court” featured some video footage of floodlit fields (and of course, tennis courts) that, in one way or another, has found an evidently special place in Yelich-O’Connor’s heart. 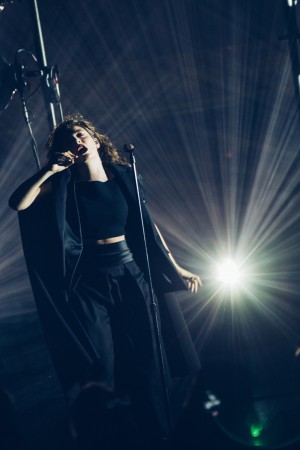 After cruising through a tireless “400 Lux”, a song best described as the product of vacant hours spent touring Aukland, New Zealand’s vanilla suburbs, lighting went red and a blast of balloons and confetti was unleashed out into the humidity and what followed surprises me yet: a cover of Kanye West’s “Flashing Lights”. Though perhaps slightly awkward in her register, the high energy hip-hop balladry lead beautifully into the rhythmically epic and harmonically mellifluous “Bravado”. This song alone was more than enough to convince me of my nagging hunch that somewhere in Lorde’s vocal cords is something magic whose narcotic quality wins me over every time.

The evening was not without its shortcomings, though I will unapologetically cut Lorde and her team some slack; no tour opener is ever perfect. “Biting Down”, a song whose syncopated percussive elements and Andrews-sisters-meets-gospel harmonies first convinced me of Lorde’s worth, lacked some of that invigorating tribal/rhythmic passion and was overshadowed by a critical note sung flat. Her quintessential heartfelt monologue prefacing “Ribs”, now ubiquitous, felt all but perfunctory, though I’m confident that more than a few heartstrings were tugged. “This is blowing my mind,” she said. “When I wrote this song, I felt alone – I felt like I was under the water. This song represents breaking the surface and coming out of the water. It means the fucking world to me.”

One thing I learned last night is that there’s nothing that can go wrong at a concert that a quick wardrobe change can’t fix. Retaking the stage in a red outfit and cape, Lorde more than delivered with “Royals” and “Team”, the latter infused with a new and refreshing guitar harmony. A marquee over her head read, “The Tragic And Wonderful Triumphal Procession Of Lorde”, an eerily accurate description of the show at large. As she did back in March, Lorde closed with “A World Alone”, though this time with a note of irony. That opening lyric “I feel grown up with you in your car, I know it’s dumb” conveys an innocence that Yelich-O’Connor has well surpassed. Lorde is no longer just a teen sensation or a pop enigma or a Song of the Year laureate, but a voice whose rich euphony continues to amaze me and a young artist with a maturity beyond her years. As someone who has had the pleasure of seeing her twice now, I can say with confidence that the day that I miss an opportunity to attend a Lorde concert will be a sad one. Lorde, thanks again.