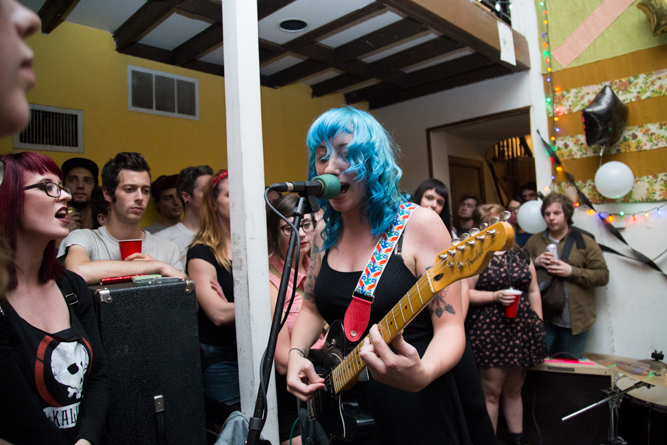 The Golden Tea House was packed from wall to wall Sunday night as local favorites Cayetana celebrated the release of their debut full length album Nervous like Me on Tiny Engines Records. The band decked the halls with tons of personal touches, hanging balloons and streamers along with and supplying the show with a keg of Dogfish Head Punkin Ale. It was truly a celebration of the scene that brought their record into fruition, and the band even presented trophies to people who help make the Philly punk scene happen.

Cayetana’s new album features both rerecorded tracks from their first EPs along with eight brand new tracks. They started the set with a slow song, “Favorite Things,” then quickly broken into the uptempo “Serious Things are Stupid” which got the room dancing. It was the classic Cayetana songs, however, that proved to be everyone’s favorites. Crowd surfers flowed during “Mountain Kids” while the audience sang over the PA during “Hot Dad Calander.” The show also featured Philly punks Albodigas, the fuzzy low-fi Spirit of the Beehive and Brooklyn punk band Chumped. Check out the photo gallery below and stream Cayetana’s new album here.