Preaching to the Choir: The Hold Steady at Underground Arts

Preaching to the Choir: The Hold Steady rock Underground Arts

Craig Finn was at a solid 8 out of 10 by the time he hit the stage. If anyone knows a thing or two about Killer Parties, it’s Finn and the rest of The Hold Steady. The atmosphere in the dingy basement bar that is Underground Arts was intense, and many of the loyal fans packed into the space had followed Craig’s lead to join in the Monday-funday.

After a brief set from Lansing, Michigan bar-rockers Cheap Girls – an indisputably apropos opener for THS – and a dragged out mic check, the small stage was as ready as it ever could be for the oncoming storm. The evening’s show was being streamed live on Yahoo Music, and the two cameramen and I were the only things separating the Hold Steady’s devotees from the gods of storytelling-rock, themselves. Early in the set, during Separation Sunday’s bloody jam “On With The Business”, Finn repeatedly glared and gestured at an overly zealous camera man who was getting between him and the fans. The Hold Steady may have sold out a little bit to Yahoo, but they certainly didn’t have to enjoy it. 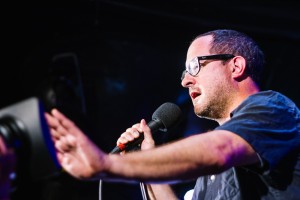 Partway through the set, Finn took a break to chat, catch his breath and talk for a little bit. Craig congratulated one fan on reaching his 40th THS show. The band kicked it back into high gear, rewarding front row members of the Unified Scene (THS’s rabid fan club) with high fives and gallons of spit. Finn lead the congregation in the singalong-songs-turned-scripture liturgy of the evening, working through a trio of classic psalms of misfortune and midlife angst like “Sequestered in Memphis,” “You Can Make Him Like You,” and “Constructive Summer” – which had all of us yelling “get hammered” in as heartfelt a manner as any prayer I’ve ever known.

The evening’s setlist was mercifully sparing on 2014’s Teeth Dreams, and felt like an old-time celebration of the unified scene that THS worked so hard to vibrantly illustrate through the characters and locations of their early and mid-period albums. I’ve certainly come to appreciate Dreams in the pantheon of Hold Steady albums, but it lacks a certain something which made me fall in love with the band. Hearing Finn belt out “It’s a big city, there’s a lot of love” with the Philadelphia skyline in the background earlier this summer at XPNFest certainly struck a chord with me, but nothing will ever top their classics. 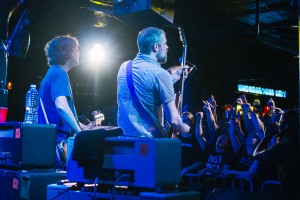 My disillusion with more recent numbers was certainly in the minority on Monday night, however. From the front row to the back of the house, fans didn’t miss a word – and remarkably, Finn never missed one, either. Even if they are a bit predictable for folks who have seen them many times before like myself, Finn’s tipsy antics always make for a genuinely fun show.

Wrapping the end of their regular set with the guitar riffs and lyrical punches of “How a Resurrection Really Feels,” the band didn’t waste too long in giving the fans what they were starving for: more. Lurching back onto the stage, Finn and the gang blasted through “Hornets! Hornets!,” “Stuck Between Stations” and finally the closing prayer of every Hold Steady show in recent memory – “Stay Positive.”

True to the song’s prophesy, “it’s one thing to start it with a positive jam, and it’s another thing to see it all through.” If there’s any band that’s done a good job of seeing it through, it’s The Hold Steady. The fans, the energy and the sheer joy of the evening all attested to that fact. Thank you, Craig. We couldn’t have even done this, if it wasn’t for you.

Setlist
Ask Her for Adderall
Cattle and the Creeping Things
On With The Business
Sequestered in Memphis
You Can Make Him Like You
Constructive Summer
Hot Soft Light
Chips Ahoy!
The Sweet Part of the City
The Only Thing
Spinners
The Ambassador
The Weekenders
Massive Nights
Your Little Hoodrat Friend
Southtown Girls
How a Resurrection Really Feels