“Proficiency” was the common thread throughout this particularly brisk Friday evening at the Mann Center’s Skyline Stage. A thoroughly stacked lineup, it’s tough (and downright reductive) to refer to the bands who played before The Gaslight Anthem as “openers.” Based on the draw each act produced during their respective sets, Friday night’s audience would heartily agree.

Following their career for as long as I have, it’s an absolute thrill to watch Against Me! play in 2014. Frontwoman Laura Jane Grace hasn’t appeared this invigorated in years. She’s a busy lady these days, as Against Me! has been touring in support of their baptismal LP Transgender Dysphoria Blues for nearly the entire year so far. Stack that on top of filming an AOL Originals documentary series on trans life (True Trans, debuting Oct. 10), appearances at queer-related forums and events, and being a mom, there’s a lot going on in the life of LJG.

But despite the fire that has been proverbially lit beneath this band’s ass in the past couple of years, perhaps the strain of constant touring has affected Grace’s voice at this point. She kept her range pretty tightly in the low register, opting out on reaching the vocal peaks of songs like “Thrash Unreal”, “Cliché Guevara” and set closer “True Trans Soul Rebel”. The poor sound mixing for Against Me!’s set did not help. Not that it mattered much. Many in the audience were belting her lyrics right back, a time-tested staple of Against Me! playing on any stage anywhere. The band is tight and knows how to play a blistering, concise set, and the chemistry between Grace, guitarist James Bowman and relatively newer members drummer Atom Willard (Rocket from the Crypt) and bassist Inge Johansson (Refused) felt like this lineup has been together for much longer than it has. Johansson in particular, with his gleeful power stances and frenetic jump kicks, seems quite thrilled to be in Against Me! at the moment. Can you blame him? 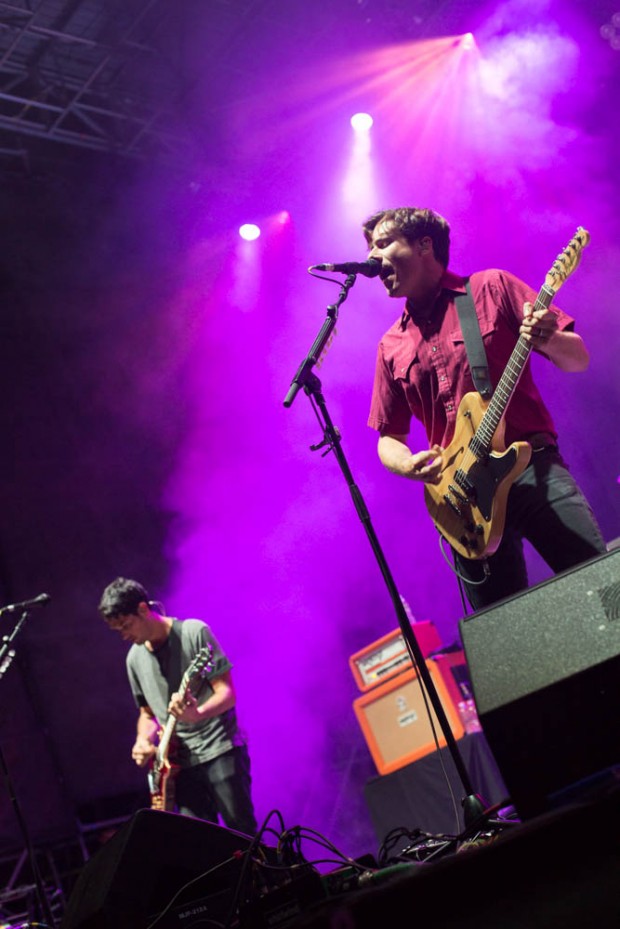 Jimmy Eat World is a band that, unlike many, many others, I would soon learn, never forged much of a connection with me. I like their music just fine and they do a great job occupying the space they do, industry-wise, but hearing anything off of Bleed American these days just makes me feel like it is 2002 and I am drinking a SoBe Life Water. Leaning heavily on Bleed American and Futures tracks, with songs from newer albums as well as Clarity’s “Lucky Denver Mint”, Jimmy Eat World couldn’t have sounded better (tech staff must’ve fixed whatever went wrong during Against Me!’s set). In fact, Jim Atkins’ voice sounds particularly ageless, and accompanied by the rest of the band, you would be hard-pressed to tell the difference between their set and their recordings if you closed your eyes. Good job, Jimmy Eat World.

As The Gaslight Anthem walked onstage, singer/guitarist Brian Fallon sheepishly approached the mic to inform us that drummer Benny Horowitz had to head home to North Jersey earlier in the afternoon for an emergency and that Against Me!’s Atom Willard would be filling in for him. “Atom just learned these songs around lunchtime,” he said [Willard later told me on Twitter that he was asked to play around 2:30 p.m. that day]. “We’re not exactly sure how this is gonna go, but we’re all up here doing our best.” And then Willard, a veteran drummer who has played in many bands over two decades, confidently proceeded to pound the absolute shit out of his kit to open “Stay Vicious”.

This was certainly a unique show to watch. Guiding Willard through twelve full-band Gaslight songs with signals for dynamic shifts and where the songs end or begin or shift focus, Fallon and guitarist Alex Rosamilia, bassist Alex Levine and touring guitarist Ian Perkins were vulnerable, exposing a “Well, let’s just see what happens” attitude that an audience rarely sees. Learning a dozen songs you have never played before is one tall order but watching this band under these circumstances was absolutely fascinating. Songs from their newest LP, Get Hurt, like the title track and “Rollin’ and Tumblin’” sounded pretty on-point, but Willard’s own drumming characteristics and reflexes completely transformed older material that have Horowitz’s fingerprints deeply engraved, like “Great Expectations” and “Even Cowgirls Get the Blues.” There was a mercurial quality to the Gaslight Anthem Friday night. When they played “Wherefore Art Thou, Elvis?,” off 2008’s Señor and the Queen, Willard, either on purpose or not, removed the song’s soft bridge and created a crescendoed bridge that this audience member might prefer to the original song.
“How’s he doing? Not bad, right?” Fallon, ever the “aw, shucks” personality, asked us. As if he needed to check.

Willard left the stage after 12 songs, reasonably exhausted after playing an additional set tonight leaving Gaslight to finish off with a few stripped down songs. From then on, the night felt as intimate and candid as it could for the Jersey band’s largest Philadelphia audience to date, playing, for the first time in quite a while, acoustic versions of older songs likes “The Navesink Banks,” “High Lonesome,” “Blue Jeans & White T-Shirts,” and “1930”. I may have felt jaded about The Gaslight Anthem at times in the recent past, but hearing this massive audience singing “We’re never going home until the sun says we’re finished,” brings me back to my dad’s basement, where this lyric first slapped me in the face.

Fallon was earnest in his praise for our city in a way that transcends the obligatory “We love [insert town here]!” nonsense that comes from every touring artist. He told us how they first played in Philly basements, and that the Trocadero was their number one goal, how it was a destination for shows when they were kids and how it remains a beacon for them. “If we ever play the Troc, I’d be like, ‘OK! That’s it!’ And now we’re here,” he said to the Mann Center’s Skyline Stage, framed by enormous applause and, in the distance, the Philadelphia skyline.