If you told me that a dude who’s about to turn 64 was capable of drawing 20,000 Philadelphians out to the Wells Fargo center (that’s right, the place that unabashedly charges about $8.00 for a slice of Lorenzo’s pizza that would normally run you $3.00, but I’m not bitter) on a Monday night during an Eagles game no less, I’d crack a smile and say, “good one”. But that joke is a reality and that dude is Tom Petty, a man who is undoubtedly the world’s most offhand rockstar. But Petty wasn’t alone in his blithe glory; his quintessential almost all-American (drummer Steve Ferrone hails from Brighton, England) backing band, The Heartbreakers, was not just equally old, but equally killin’. 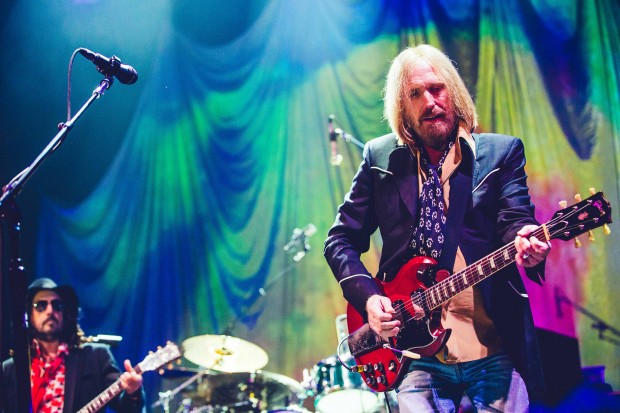 “We’re going to play until they kick us out of here,” said a smirking Petty as he and his Heartbreakers took the Wells Fargo stage, and while I don’t think anyone was fooled by this remark, a 20-song, hit-saturated set was more than enough to make an already-enthused Philly crowd happy. Let me get the following out of the way: yes, those Petty classics that fill up our mental jukebox catalogues like “I Won’t Back Down”, “Free Fallin’”, “Refugee”, “American Girl” and “Runnin’ Down a Dream” (I could go on, but I’m out of quarters) were good enough to make even the toddler next to me take to his father’s shoulders and whip out his iPhone (it’s a scary thought, I know) to seal the moment into forever-ness.

But in my eyes (or rather, ears), it was songs like “I Should Have Known It”, whose sneering blues-rock swagger affirmed Petty’s badass status, and “A Woman In Love (It’s Not Me)”, on which guitarist Mike Campbell took a monstrous solo, that made my night. That, and the fact that not one, but two rock legends were in the house, the second of whom was opening act Steve Winwood.

Winwood’s set, like Petty’s, featured hits from his days in Traffic and Blind Faith: “Low Spark Of High Heeled Boys”, “Dear Mr. Fantasy” and “Had To Cry Today” (I still have the riff in my head because damn, was this one good) to name a few. But the fun didn’t end there, folks! Later in the evening, Winwood joined Petty onstage for “Can’t Find My Way Home” and “Gimme Some Lovin’” (dropping ‘g’s seems to be a trend among rock legends), the latter of which was greeted with about as much enthusiasm as I assume was exuded in the homes of many about an hour later when the Eagles scored a winning field goal. “That made my day,” said Petty. Mine too, Tom. Mine too.

Encore:
Don’t Come Around Here No More
You Wreck Me
American Girl