It’s been so long since Jack White came to Philly, we went to Maryland to see Jack White. And it was outstanding.
Events

It’s been so long since Jack White came to Philly, we went to Maryland to see Jack White. And it was outstanding.

Pardon me if I was not sweating by the end of Jack White’s rip-roaring 105-minute set on Sunday night at Merriweather Post Pavilion in Columbia, Maryland; it was a nippy 55 degrees by show’s end. The nearly sold-out crowd was certainly in a heated frenzy from start to finish as White orchestrated a set that spanned his two solo albums, The White Stripes, Dead Weather and The Raconteurs.

Notorious for moody and eccentric behavior, White seemed nothing but pleased to be playing on a Sunday night. From the first notes of the show-opening White Stripes’ song “Dead Leaves and the Dirty Ground” onward, the crowd was on its feet. Lit exclusively by blue lights, White, with a new hairdo that appeared inspired by Arcade Fire’s Win Butler, did what he does best: paint an aural landscape of sublime rock ’n’ roll with his guitar brilliance and bluesy vocals.

Songs from 2014’s Lazaretto figured heavily into the setlist. The night’s second song was the instrumental “High Ball Stepper,” which certainly sent shockwaves of aural joy throughout the Merriweather. And the album’s biggest highlight, “Three Women,” sounded glorious live halfway through the 22-song set.

White and his five-member band may have been dressed like they just walked out of a 1920s-era nightclub, but they played like a tight-knit band of the aughts. Lillie May Rische added some violin and piano, along with rich backing vocals — most notably on “Love Interruption” and “We’re Going to Be Friends.” Drummer Daru Jones was having a blast, often standing up to deliver the percussive textures of White’s various incarnations.

There was barely time to breathe in between the sprawling numbers as White and company kept the treasure trove of tracks coming. The fans provided a raucous sing-along to The White Stripes’ “Hotel Yorba” early in the set, while the eight-song encore was enough to satisfy even the casual fan. Beginning with the Stripes’ “Icky Thump,” White tore through past and present at a breakneck pace. Selections from his solo albums, like “Sixteen Saltines” and “Love Interruption,” fit just fine against the Stripes’ “I Fought Piranhas” and “We’re Going to Be Friends.” And the night would not have been complete without “Seven Nation Army.” The powerhouse cacophony of rock was a great way to conclude the night. White was beaming and even told his fans how much he loved them. Certainly the feeling was returned by all.

It would be remiss not to mention that White has ignored Philadelphia proper for a number of years. (It’s been 12 years since any of his associated acts has headlined here.) A two-hour drive on a Sunday to dive into his psyche of twisted vintage and contemporary sounds and themes is definitely worth it, but he should return to the City of Brotherly Love. We’re ready and waiting to taste the spectacle that places like the Washington, D.C., area get on every tour.

Olivia Jean opened with a solid set of garage rock tunes, including a retro romp through Shocking Blue’s “Venus.” Not bad for her first solo performance. 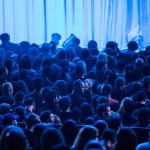