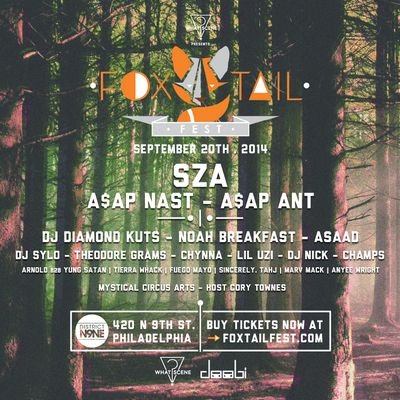 What’s ‘What Scene?’ trying to do with Foxtail Fest?

Given Philadelphia’s recent penchant for high-profile festivals whose acts carry the torch for pop’s evolutionary bent – a wordy way of saying that the festivals “aren’t lame or played out” –  Saturday’s Foxtail Fest has remained conspicuously under-the-radar. This isn’t for lack of star-billing by any means – Saturday’s all-day electronic- and hip-hop-focused festival features a headlining set from SZA, a buzzed-about downbeat RnB singer whose evocative vocals and lush instrumentals led to her 2014 EP Z receiving tremendous acclaim. Sets from A$AP Mob upstart A$AP Ant and Philly’s own master-producer DJ Noah Breakfast (a.k.a. Xaphoon Jones of Chiddy Bang), among others, promise to bring large audiences of their own. So why is this festival so comparatively hushed?

FOXTAIL FEST 2014 from What Scene? on Vimeo.

It might have something to do with the atmosphere that Foxtail’s organizers, the Philadelphia- and Wilmington-based events firm What Scene? is trying to cultivate. Specializing in events with interesting aesthetic twists (they even held a concert on a yacht), they’re working to make Foxtail Fest more than just a festival. The day-long event will also feature an outdoor fire show, acrobatics, contortionists, and 3D projections to create a one-of-a-kind concert experience.

Given this line-up, as well as the provision of free shuttle buses from Temple University’s campus, it would seem like Foxtail is trying to provide an experience catered to the musically-adventurous young Philadelphian who might find Made in America too crowded and the Roots Picnic too esoteric. For them, something with obsessive hype might be a turnoff. In this regard, Foxtail Fest might be the most unique festival to hit Greater Philadelphia in the past few years (last year’s festival in Wilmington, which ended in a lawsuit between the firm and city over security snafoos, might have caused What Scene? to play a little closer to the hip as well). It’s well-worth checking out if you love new non-rock music and want to peep the new sounds from this often-misunderstood musical world’s emerging local underground.