In some ways, British singer Lily Allen is your typical pop star: she’s sold millions of records worldwide and attracted tons of media attention thanks to her wild partying and antics; if you didn’t know any better you might compare her to Miley Cyrus (in fact, she opened for Cyrus on her 2014 Bangerz tour).

But look at it another way and she’s totally different: where much of pop music is based on artifice and least-common-denominator lyrics, Allen is real and quirky; where most pop stage shows are carefully choreographed extravaganzas, Allen is spontaneous and down-to-earth, her strong personality a large part of what makes her so magnetic. Friday night, Allen brought her unique view and vision to life at the Electric Factory, dazzling fans with witty lyrics and candid commentary.

Her set drew heavily from new record Sheezus, released earlier this year, and it many ways, it felt like a comeback. Five years prior Allen almost retired from music altogether, thanks to incessant media taunts and a desire to focus on other endeavors. Her show in Philly was her first in more than half a decade and not surprisingly, people were psyched. Waiting in the photo pit I overheard fans in the front row bragging how they arrived at 2 pm to snag  prime locations; later I watched the dude in front of me send myriad Snap chats titled simply “My girl Lily Allen.” Despite her respite, clearly she still has a hold over people.

And with good reason too!  Over the course of 90 minutes, Allen was playful and charming, smoking cigs on a whim, throwing off her shoes partway through because her feet were “getting stuck,” and asking the crowd to wait as she swapped costumes because “I got so wrapped up in dancing to that last number I forgot I was supposed to leave stage half-way through to change.” 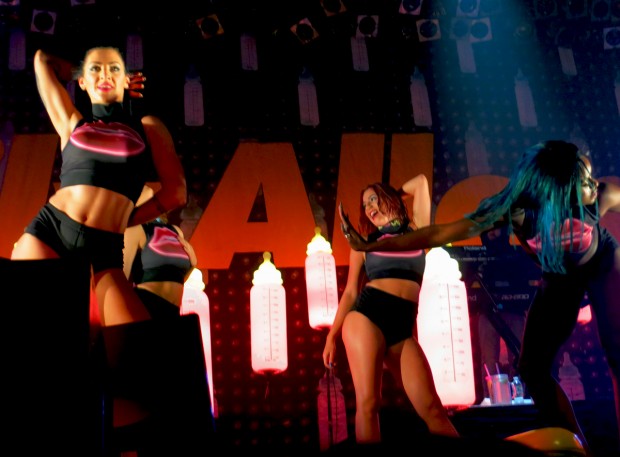 She took the stage clad in a quilted jacket, platform boots, and smiley face leggings, a team of dancers skulking and flailing around her during set opener “Sheezus.” The dancers re-appeared several times throughout but a majority of the set was all about Alllen, her backing band set further back on stage so as not to steal her spotlight…which would have been basically impossible anyway. Nobody commands attention quite like Lily.

She was surrounded by several giant baby bottles, which changed colors throughout—turning bright, tropical colors for beachy tune “Life for Me” and sparkling during champagne-tinged charmer “Our Time.”

They say the best way to craft relatable tunes is to write about what you know, and one thing I love about Lily Allen is seeing how her music matures as she does. Perhaps it’s because we are almost the exact same age, but I’ve always found she has a knack for capturing my thoughts with eerie accuracy. While earlier records have focused more on bitter break-ups, frenemies, and partying, Sheezus presents happy relationships as the key to late 20-something bliss; in “As Long as I Got You” she shared that “Staying home with you is better than sticking things up my nose” (a very hilarious way to put it); in “L8 CMMR,” she crooned, “I won’t send him back; he’s won me game, set, and match.” (Apparently she is a tennis fan). Still, she’s not ready to give up partying completely—later she admitted during “Our Time,” “I’ll get high; but I ain’t doing benzos.” Very responsible, Ms. Allen.

But just because Allen is newly happy doesn’t mean for one second that she’s lost her edge. She closed her set with It’s Not Me, It’s You track “Fuck You,” the crowd waving their middle fingers in the air empowered. For her encore, she chose Sheezus single “Hard Out Here” (for a bitch), the dancers reemerging with dog masks (because they’re “bitches”…get it?) then belted and danced like a feminist icon. Which in a way, she kinda is.

Set list:
Sheezus
Not Fair
LDN
As Long as I Got You
Our Time
Everyone’s At It
The Worst (Jhené Aiko cover)
URL Badman
No Flex Zone
Smile
Life for Me
Littlest Things
Miserable Without Your Love
The Fear
22
L8 CMMR
Who’d Have Known
Fuck You