From outer space to the E-Factory, Broken Bells impress

From outer space to the E-Factory, Broken Bells impress
Events

From outer space to the E-Factory, Broken Bells impress

The NSEA Protector has landed, and its shipmates might just be human. Only the spaceship is actually Broken Bells’ set of sci-fi stage adornments and the shipmates happen to be James Mercer and Danger Mouse (Brian Burton), two of the 21st century’s champions of songcraft. It’s no secret that this unlikely duo aspires to an astral cyborg aura, their 2010 video for “The Ghost Inside” featuring Mad Men’s Christina Hendricks as a cash poor humanoid on a space shuttle in search of her dream planet. But try as you may, there’s no keeping these guys from touching down on Earth to put on a dynamic – and notably human – live concert. 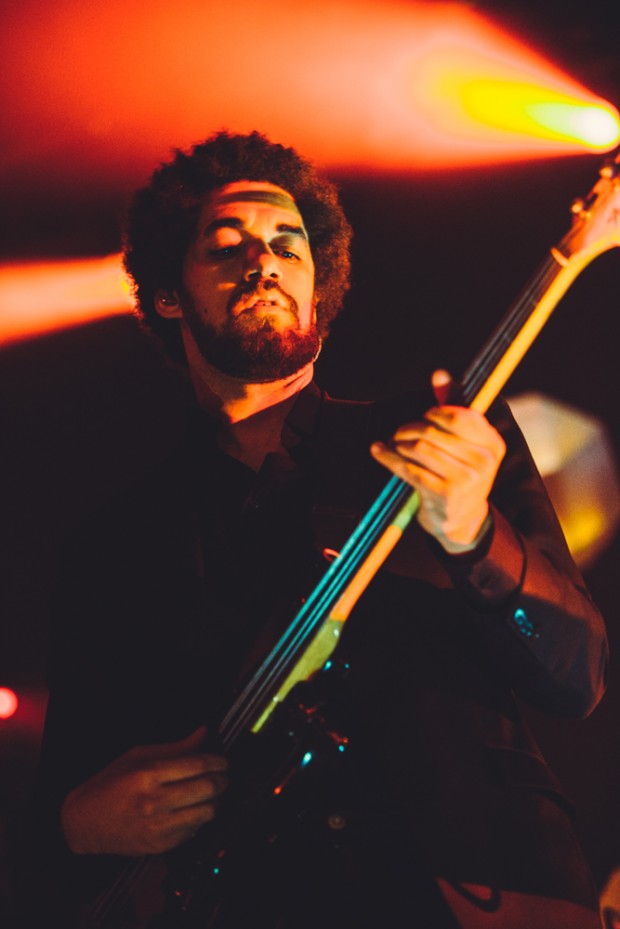 Burton and Mercer took the stage in silhouette, raising their glasses in salute of a packed Electric Factory floor. Joined by tour musicians Dan Elkan and Jon Sortland (a man who looked to be about 8 feet tall from where I was standing), our two captains threw the ship into overdrive and took us to space with a rendition of “Perfect World” that was, dare I say, simply perfect. They then took a page out of The Grateful Dead’s book and jammed out of “The Ghost Inside” straight into “After The Disco”. Point taken: ~110bpm is a good bpm.

At some point during “The Angel and the Fool”, a hard-partying woman celebrating an ostensible 41st birthday came out of what I assume was nowhere and turned the track’s heartwarming coda into a bout of hell-yeahs and woohoos, which I probably could have done without. I do have to give her credit for straight-up calling “October” (which killed, by the way) in the middle of their set, especially considering it’s a track typically reserved for a final encore.

“Meyrin Fields” was cannibalized by the Electric Factory’s dismal acoustics and ended up sounding way more like a failed attempt at dubstep than the glitch-punk vibe I assume it was meant to imbue. Just because you can doesn’t mean you should. And “Medecine” fell apart before it came together, but Burton made up for his almost painfully out-of-tune bass with some bubbly grooves towards the end. I’m not a huge fan of “Sailing to Nowhere”, but its dynamic ebb and flow brought the music box (google it) melody to life. “You can tell how much pot the audience smoked by how much they liked that song,” said Mercer. I guess the audience smoked a lot of pot (Philly weed decrim for the win?).

Call me crazy, but there’s no Broken Bells song that gets to me more than “The Changing Lights”. Yeah, the audience came together to sing along on favorites like “Holding On for Life” and “The High Road”, but never in my concert-going history have I heard sexier chords played than those on the chorus of “The Changing Lights”. And though James Mercer and Danger Mouse were on a stage 5 feet-high, there was an inexplicable closeness in the air. It’s not too late to feel a little more alive.