Exhilarating as ever, Neil Young transforms the Academy of Music
Events

Exhilarating as ever, Neil Young transforms the Academy of Music

Neil Young transformed the splendor of the Academy of Music into a lively space of reminiscing and activism for his first of two sold out solo nights on Wednesday. The passion, the voice and the sound of Young at 68 is an exhilarating spectacle for the ears and the mind. And for two and a half hours, the Philadelphia crowd was in musical ecstasy.

Opening with the inquisitive desire to keep it together musically and interpersonally with “From Hank to Hendrix,” and extending to the encore song “Thrasher” and its examination of parting ways with Crosby, Stills and Nash, Young was putting his past under the microscope. And then there was love or its loss on songs like “On the Way Home” and “A Man Needs a Maid,” among others. Young, who would change position for songs frequently from sitting, surrounded by an army of guitars, playing at one of three pianos or organs or ripping at his guitar standing up, was opening his songbook of feelings and experiences for all to drink in, enjoy and engage with.

And Philadelphia did not disappoint with engagement. Despite the venue’s grandeur, fans called out throughout the performance. Whether it be requests, admiration or responses to songs, Young did not dissuade the interactive vibe. This was most telling during a moment after “Southern Man” when Young was ranting about the evils of government deals for fracking and the profits of oil companies. A woman shouted out the question of “what should we do about this?” 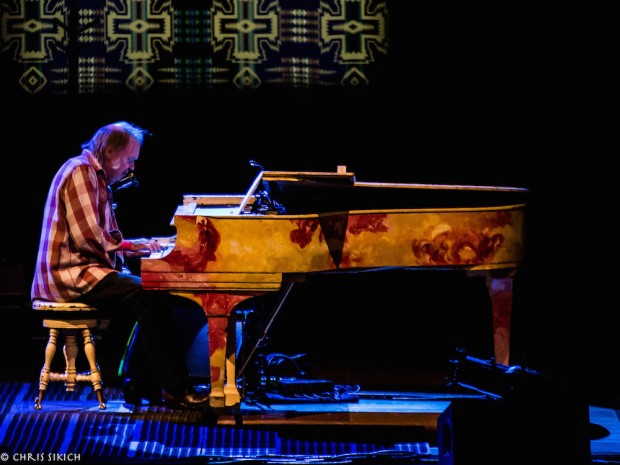 Young sidestepped a direct answer for one of his new works, “Who’s Gonna Stand Up?” Directly about fossil fuel consumption and environmental destruction, Young struck a fire beneath what could easily have been a jaded crowd. At the end he angrily kept repeating the song’s title while picking away. Much of the crowd jumped to its feet and was cheering him and the idea on. It was one of the most exhilarating live moments I have ever experienced, and this venue with a storied existence seemed to be, even if fleetingly, ground zero for change.

The classics sizzled. “Heart of Gold” washed over the soul with Young’s brittle voice caressing its syllables. “A Man Needs a Maid” had an epic bite and a modern edge with its electronic organ moments interspersed among its classic haunting nature. “After the Gold Rush” was simply sublime. And the new songs and covers were scorchers. From “I’m Glad I Found You,” a gorgeous song he did on piano, to his brilliant cover of Gordon Lightfoot’s “If You Could Read My Mind,” the unfamiliar immediately gained a deserved timeless sheen.

Young’s banter was welcome. From his ruminations on the high amounts of pesticides used in cotton (which he correlated to his desire for the crowd to buy his organic t-shirts) to the great loss of species in recent times, it was as if we were in his living room (and an eclectic one at that with a totem pole, furs and a gigantic tomahawk) listening to the records of his life and discussing his hopes and fears for the future. And he even dropped in the impossibility of any future CSNY tours.

What more can be said about a perfect night of music? Neil Young is a one-of-a-kind experience who should be seen at least once. You get another chance tonight and hopefully many more to come in his future.

Set 1:
From Hank to Hendrix
On the Way Home
Only Love Can Break Your Heart
I’m Glad I Found You
Mellow My Mind
Reason to Believe (Tim Hardin)
Someday
If You Could Read My Mind (Gordon Lightfoot)
Harvest
Old Man