Courtney Barnett sometimes gets saddled with the “slacker” tag—she’s got this shaggy hair and these boxy tees, and these slow, shuffling bass lines that amble lazily across your eardrums, like maybe they had two beers and it’s a Saturday. Really though, she’s anything but—the Aussie crooner founded her own record label, Milk Records, while in her early 20’s; now, barely into her mid-20s, she’s emerged as somewhat of a workaholic, playing no less than 64 shows since I saw her last February, in addition to working on a new record.

“I don’t reckon you would know anything about me if I wasn’t moderately hard-working,” she once quipped.

Hard work probably got Courtney there a little sooner. But it’s her songwriting—and quirky, relatable lyrics—that did most of the heavy lifting.

So where’s there, specifically? For now, it’s moderate indie rock success; an appearance in Pitchfork’s “Best Tracks of the Decade,” a performance on Jimmy Fallon. But Courtney easily has the goods to make it further. When I saw her live earlier this year, I wrote that she was something special.

“Courtney Barnett doesn’t just write heavy, juicy guitar lines that wiggle their way into your brain and reverberate,” I wrote; “she doesn’t just write breezy choruses that wash over you like sunlight. She writes songs that actually do these things, for sure…but also more.” 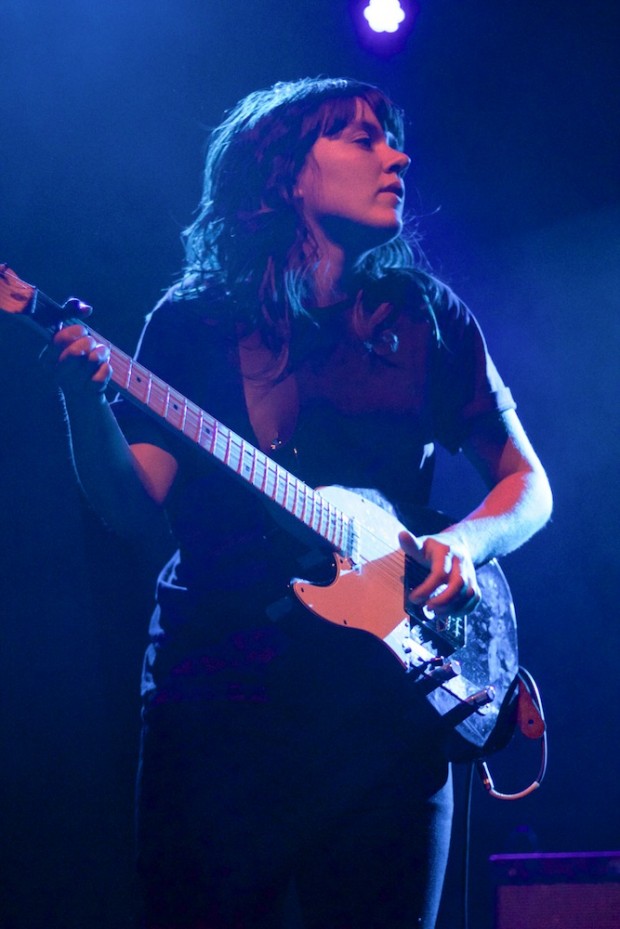 10 months later, I still believe this. Courtney has a unique viewpoint, and a way of effortlessly capturing the most salient aspects of life in her songs. She’s a gem, and I am super psyched to be talking to her a week before her second Union Transfer appearance.

When I ring her up Monday night, she does not sound well. Her voice sounds raspy and broken, which at first I attribute to the long-distance connection (the first time I ever used my Comcast home phone line)—but later realize it’s because she’s actually sick, lying in her bed, attempting to recuperate.

I ask if it’s from all the touring, and tell her we could have rescheduled for another time. She chirps back, “oh no, I don’t mind! I told my publicist I could handle one phone call from my bed.”

It’s a totally Courtney move—powering through setbacks with a positive attitude.

Over the course of our conversation, we talk gardening and summer jobs—and what she ate the last time she visited Philly (hint: it was not a cheesesteak). For someone sick, she is surprisingly upbeat—but then again, I wouldn’t expect anything less.

The Key: So I saw you the last time you came to Union Transfer, and it was just so much fun. I remember the show was actually moved from a smaller venue because it sold out so quickly. That was in February—how do you anticipate this show being different?

Courtney Barnett: That was one of the first shows we did in America. I was so nervous, and the fact that there were so many people there and it sold out ahead of time made it even more scary. Since then Bones [Sloane, bassist] and Dave [Mudie, drummer] and I—we’ve covered more ground as a band. We’ve played more together and we’ve become more confident. I think we have a lot more fun as a result.

Also, since then, we got one more person in the band: our friend Dan [Luscombe], who plays guitar. He’s played with us the last couple of years really. 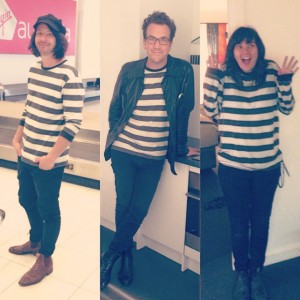 TK: Have you written any new material you’ll be playing on Monday?

CB: [laughs] Yeah we will! We will play a few songs off the album coming out next year.

TK: I know you have a big audience here in Philly, and I sometimes wonder if it’s because a lot of the small details in your songs sound like you could be describing life here. When you’re traveling are there any cities that remind you of home?

TK: Do you have any specific memories of Philadelphia?

CB: Last time we came we went out for nice dinner. They had a mushroom soup [She laughes. Kate notes: “Mushroom Soup” totally sounds like the name of Courtney Barnett song]. Then after the gig we had to drive back to New York.

We really like Philly by the way. We joked we wanted to move there. So we need to come back and spend more time there.

TK: Do you think some of these cities you visit will eventually become stories that become songs?

CB: Totally, yeah. It’s been great. Being on tour and traveling you see all these different things, and you see them differently. It’s quite inspiring. I’ve written a lot.

TK: You have been on the road a lot this past year. How has your life changed as a result? Did you enjoy yourself?

CB: Overall it’s been great. Tour has bad parts but the majority of it is awesome. But you’re right—it has been a lot. I was on the road through most of the summer, then home for a few months, then I just did an Australian tour… It’s a real privilege though so I can’t complain. I enjoy it. 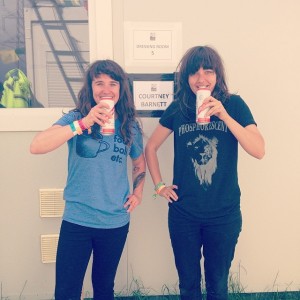 TK: I read in one of your other interviews that you used to deliver pizzas back in the day. What was the worst job you ever had?

CB: I look at all my jobs with optimism. Some of them were really shit, but, you know….delivering pizzas was kinda shit. I got tipped shit, I used my own car, I got paid shit…it wasn’t the greatest.

But you know, it was still kinda fun in a way. I saw some funny stuff and I met some funny people. I don’t know. Dead-end office jobs, and retail jobs, and working at the pub…they’re all pretty bad.

TK: Being a rock star, on the other hand, sounds fun!

CB: Yeah! It’s quadruple the amount of time and amount of work. But yes, at least it’s fun!

TK: So let’s assuming for a second you had a weekend with no music-related things to do. How would you spend your perfect Saturday?

CB: I’d probably sit in my garden and read a book. That’s what I’d like to be doing now, if I wasn’t sick.

Courtney Barnett plays Union Transfer on Monday, October 20. The all-ages show starts at 8:00 and tickets are $20; more info can be found via the venue’s website.