Kopecky Family Band keeps us coming back at Union Transfer

It’s no secret that the Kopecky Family Band is not really a family, but with or without shared bloodlines, these Nashville rockers managed to make us all feel at home Friday night at Union Transfer. Their records are solid, of course, but there’s something about seeing them live that brings out something that’s just plain likable. Frontman Gabe Simon humbly introduced himself to the front row as he set up his own pedalboards. He even remembered seeing me at their killer TLA show from about a year back. But a nice guy does not a great musician make; we care about the sounds, and there’s a reason the Kopecky Family Band continues to have me coming back for more. 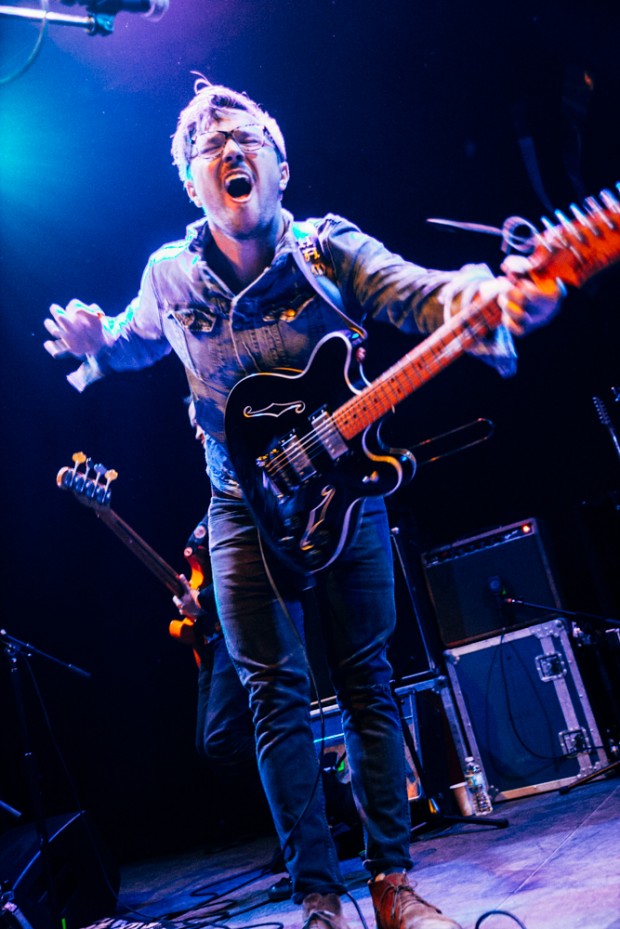 Last year, KFB was touring in support of their 2012 Kids Raising Kids LP. This time around, they were on a 7-show stint to test out new material for a forthcoming album. As always, the Tennessee 6-piece smashed it with their hits. Their more percussive tracks like “The Glow” and “Hope” got the crowd moving with savage passion. For those in a more romantic mood, “Casualty” touched a sentimental note among longtime fans, and of course, the immaculate harmonies shared by Simon and frontwoman Kelsey Kopecky and heavenly guitar strumming of “Change” made our hearts swell in unison.

From what I remember, the Kopecky Family Band played 3 of their new tunes, all of which kept up with the group’s high standard of sincerity and impeccable orchestration, though veered towards a deeper-rooted pop sensibility than they’ve previously delivered. They closed their set with “Tusk”, a Fleetwood Mac cover that they’ve made their own over the years. Simon jumped offstage and ventured out into the crowd with his trombone as drummer David Krohn and the rest of the group kept it locked in with brute-force drum lines.

Opening for the Kopecky Family Band were fellow Nashvillians, COIN who brought some earnest synth pop and boundless energy to the UT stage. Though I can’t say for sure as they haven’t yet released a full-length album, my only complaint was that their set lacked diversity (though variety isn’t exactly synth-pop’s claim to fame). If anything, I’ve got to tip my hat to Nashville for fostering not one, but two of the blue ribbon acts I had the pleasure of seeing last night. As I walked out of the Union Transfer doors, I caught a glimpse of a dumbstruck fan saying, “That was the best show I’ve ever seen!” I for one can’t go quite that far, but I can say that next time the Kopecky Family Band is in town, you know where I’ll be.