“I guess we didn’t really think it through, does that kinda make us like dinosaurs?” Aaron Weiss—just as charmingly awkward as ever—asked the audience late on Saturday night. Earlier in the evening, he and his longtime friends who make up mewithoutYou had taken the stage of the Trocadero to the swelling orchestral theme from Jurrasic Park, to celebrate their breakout album Catch for Us the Foxes turning 10 years old. Whether you see Catch as a fossil from mewithoutYou’s early days or the cornerstone of their career-writ-large, Saturday’s sold-out, hometown show was undeniably one for the history books.

Fellow locals Hop Along got the evening started, with lead songstress Frances Quinlan calming the chatty audience by opening with a solo version of “Trouble Found Me” before the rest of the band came out and started tearing through a short set of tracks from 2012’s outstanding release Get Disowned. Quinlan’s unique voice rose in rips and starts, adding immeasurably to the very emotional nature of the band’s songs. At one point, she mentioned how grateful that she and the band were to be on tour with mewithoutYou, and especially to be playing the Troc where she “grew up seeing shows,” name-dropping Death Cab For Cutie, Ben Kweller and others in a string of halcyon shows. 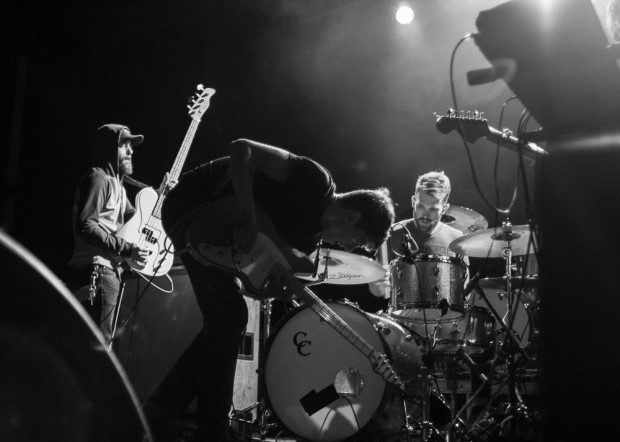 Next up on the bill were under-the-radar emo-fundamentalists The Appleseed Cast. With an absolutely massive discography, I wasn’t able to spend as much time getting into their music as I would have liked before seeing them on Saturday, but that didn’t make them any less enjoyable. The fact that the band never said much didn’t hurt their stage presence—and added a bit of a mystique to the math-y complexity of their sprawling songs. Actually, it was definitely better when they weren’t talking. At one point, lead singer and guitarist Chris Crisci broke a string, and bassist Nathan Witman had to cover by awkwardly rambling through a painful monologue about visiting cities and a couple of groaner dad jokes. Nevertheless, The Appleseed Cast delivered a sonically massive set and primed the pump for mewithoutYou’s performance.

Regardless of what the Jurassic Park theme connotes about their age, the band entering to it could not have been more poignant. The fans absolutely loved it, laughing and clapping—which quickly turned into the unmistakable clap-beat that hallmarks Catch’s opening track, “Torches Together”. The band’s fiery energy was absolutely on point. Saturday marked my seventh time seeing the band, and even I was blown-away by the new heights that they’re reaching in terms of stage presence.

Aaron wasted no time engaging the crowd, sprinting and leaping over my head into the frothing pit for barn-burner “January 1979”. After the guards pulled him out, he fell to the floor of the photo pit and huddled with his arms over his head during the ripping guitar solo in the bridge. At first, I thought he been injured during his dive, but as I watched it was movingly clear that Weiss was instead overcome with emotion and caught up in the sheer spirituality that makes a mewithoutYou show something completely magical—for band and fans, alike.

The primary setlist played out without any real surprises—they were playing Catch from front to back, after all. During breaks in the set or lulls in songs, Aaron would periodically tape flowers to the mic stands, something I’ve seen in old photos of the band, but not at any of their more contemporary shows. 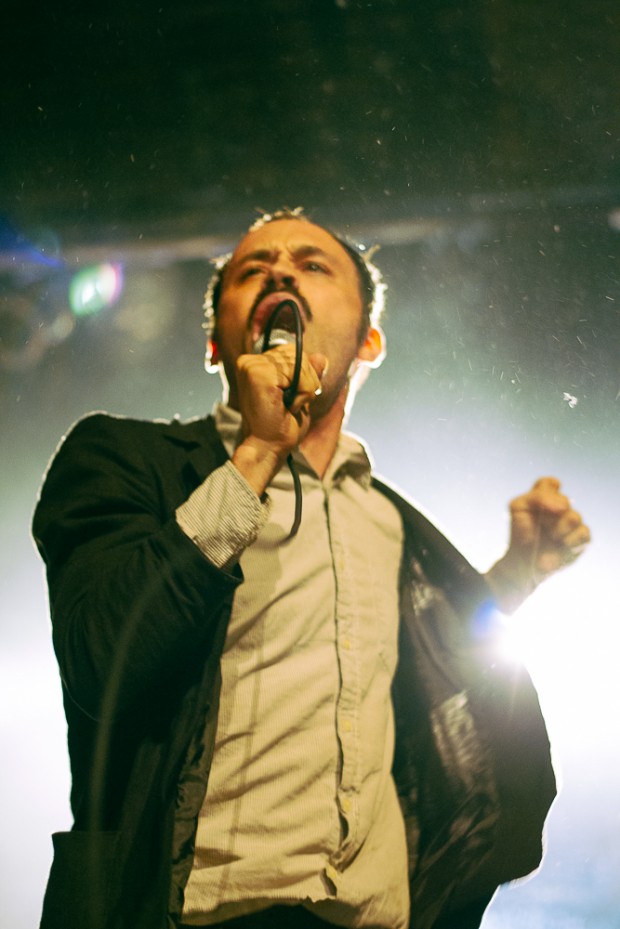 It’s clear that the band has been enjoying this return to their older material, with almost inhuman amounts of smiles and sweat flowing on stage. From my spot in the balcony, the mosh on the floor also looked very real—as fits the mood of their older material. Another thing that’s pretty plain to see is that we’re finding Aaron in a much better place then when he wrote the very heavy lyrics of Catch. Smiles and whirling-dervish-esque dancing, hugs and leaps marked his performance—in stark contrast to the dark themes of suicide and seeming unworthiness that are laced through the album’s lyrics. It was beyond moving to hear him change the lyrics in “Tie Me Up! Untie Me!” to reflect that; triumphantly shouting “and I haven’t event thought about killing myself… in ten years!”

The gravitas of the evening was brought to a pronounced height when Aaron thanked friends and family (as well as the dean of Temple’s School of Education, where he is a student) for being in attendance, then surprised everyone by bringing original band members Daniel Pishock and Chris Kleinberg on stage to play, marking the first full reunion of the original lineup in nine years. Together, they played slow-burning album finisher “Son of a Widow” without missing a note, and closed the book on Catch in an absolutely unparalleled way.

The band waved, shared some big hugs, and left the stage amidst deafening cheers to get even more love from a large group of friends and family waiting in the wings. Never ones to belay a point, they quickly took back the stage for a shorter, career-spanning set. Material from their 2006 masterpiece Brother, Sister composed most of the after-set, although they dug up the grave of debut album A–>B Life in order to play the crushingly heavy “Gentlemen”, with Weiss screaming out the lyrics about immeasurable pain, which he apparently no longer feels.

The band’s traditional closer “In a Sweater Poorly Knit” found members of The Appleseed Cast and Hop Along—as well as a few young family members—swarming the stage in order to join in the hallowed existential refrain of “I do not exist, only You exist.” As if the rest of the night hadn’t already been emotional enough, that one always ends up punching me right in the heart. Sighing, I started putting on my coat and getting ready to head home, completely content—as did many other folks. But after a couple of minutes, Aaron jogged back on stage with his guitar to please the fans who stuck around with high hopes. 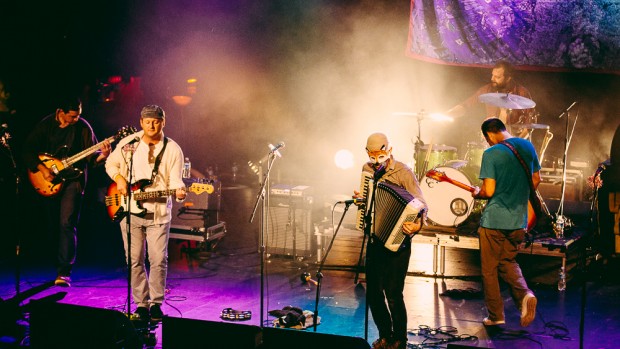 Alone at the mic, Weiss worked through the haunting acoustic front-end of ballad “The Angel of Death Came to David’s Room,” and the rest of the band joined to let the song crash and cascade to its finish. The fantastically long evening finally came to a true close with a ripping rendition of Brother, Sister’s “Wolf Am I! (And Shadow),” a personal favorite of mine.

For now, it looks like mewithoutYou will head back to the studio, and continue recording their upcoming sixth LP. I doubt that we’ll see them on the road until after the release of that record sometime next year—although I haven’t completely given up hope for the chance at a smaller surprise hometown show in the meantime. Time will tell what to expect on their next release, does a happier (and married!) Weiss necessitate happier songs?

At any rate, it’s nights like Saturday that will always keep me coming back to see mewithoutYou, time after time. This is a band always treats its fans like family, and hometown shows doubly so. Family, friend or fan, those in attendance at The Troc on Saturday night were treated to something very special—even for a band who sets the bar exceptionally high in every other city I’ve seen them play. Transcendent.

Second Encore:
The Angel of Death Came to David’s Room
Wolf Am I! (And Shadow)