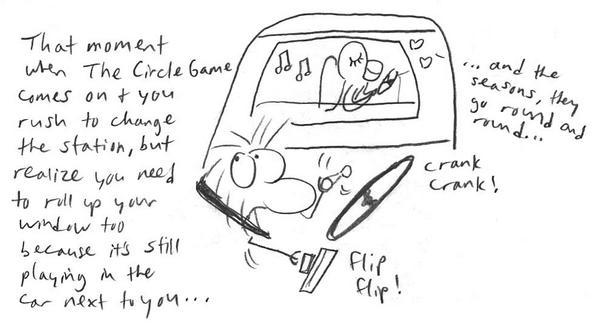 The above tweet by Philly illustrator Matt Friedman showed up in our Twitter feed yesterday, and nicely sums up the beauty and hilarity of WXPN’s 885 Greatest Songs of All Time countdown. With music jumping all over the spectrum, it sometimes feels delightfully random; with like a bazillion Beatles selections ranking so far, it also feels somewhat predictable; and then, out of nowhere, there will be this sick transition between “Penny Lane” and “Rebellion (Lies)” by Arcade Fire, and you’ll be like “holy cow that was amazing” and you keep listening. It keeps you hooked. Equally addictive is the #885countdown hashtag on Twitter, where some amazing conversation and commentary has been unfolding. Here is some of the best of what we’ve seen so far.

Stereo is significantly louder than usual in the store for the #885countdown. #itgoeswellpastelevenhttp://t.co/qSn2bHRbf2

I can hear the Commodores and Bjork within 30 minutes of each other = why I love @wxpnfm. #885Countdown

Confession – the countdown made me realize that the sample in Kanye West’s “Power” comes from King Crimson. It definitely did not make me any more inclined to listen to King Crimson, but was cool to learn all the same. Woulda rather heard Kanye in the mix though.

Why yes, I did vote for #499 Dance Yrself Clean – LCD Soundsystem. Looks like a few other listeners did too. #885countdown

Not even Michael Jackson falling down a rabbit hole of weird can stop the awesomeness of “Don’t Stop ‘Til You Get Enough.” #885countdown

At that point, Hannah, we were live-RT-ing your live-Tweeting. It’s all good.

It is both the beauty and the tragedy of the #885countdown that we can go from Springsteen into Gotye. — JJ (@bustedjj) October 22, 2014

At this point it would be worth mentioning that the #885countdown has not been all candy and roses and good vibes. Some posts have been critical and snarky, hysterically so.

I guess I’m impressed by the way all the Deadheads vote-bombed the #885countdown — Dawn Maglicco Deitch (@maglicco) October 22, 2014

“In These Shoes” : possibly the worst song Kirsty MacColl ever wrote. Let’s hope her good songs are on the countdown too? #885countdown — Maureen Walsh (@trimmtrabb1977) October 22, 2014

Okay, seriously, who voted for Kansas?!? Show yourselves.

Hey now, I thought Dan Reed crafted a mighty cool transition with that one, and I don’t even like Genesis! Plus, the song was like 47 minutes long so every second he could shave off helps.

Fun fact: Nobody actually voted for U2 in the #885Countdown, their songs just showed up in the playlist.

What does that even MEAN, man? Last night, the #885countdown hashtag started getting very visual, thanks to 70s dude-rockers Grand Funk Railroad and their epic “I’m Your Captain.” Spurned by host Eric Schuman (who was reading Tweets on the air in real time) and DJ Robert Drake (who was at home delightfully participating), the timeline became a string of images of, well, notable captains in pop culture. A few of the best ones:

This led to pictures showing up throughout the night; this one during Blondie’s “Rapture” was just too perfect.

@wxpnfm Great list you guys got going but making it really hard for me to find time to get up & take a work dump #885countdown — Canton Bound Foles (@CBFoles) October 21, 2014

Sorry, I can’t come into work this week. The #885Countdown is on. @wxpnfm

I feel that, as I’m sure many listeners do, but please don’t lose your job over the #885countdown!

Yes, it’s true. We’ve recruited Robert Drake to do a 1,493-hour Christmas music marathon beginning as soon as the countdown end Friday evening. He’s been prepping for it all year.

But in all seriousness, the #885countdown continues through Friday, you can keep tabs on the results here, subscribe to the Spotify playlist here and join the conversation on Twitter here.

Related: #885countdown Talk: What makes a song “the worst?”