Dancing Like A Wild Fire: Bombay Bicycle Club and more at Union Transfer

“All right, let’s get this dance party going!” Bombay Bicycle Club’s Jack Steadman beckoned as he brought forward a small drumset and launched straight into “Feel” off of 2014’s So Long, See You Tomorrow.

Tuesday evening, Union Transfer filled up with a mixed crowd of older adults tapping into their youth, teens trying to amp up their cool, and every age in between fashioning beanies, boots, and military jackets. But as broad as the crowd might have been, they all gathered with one thing in common… a love for the London-based indie rock six-piece. 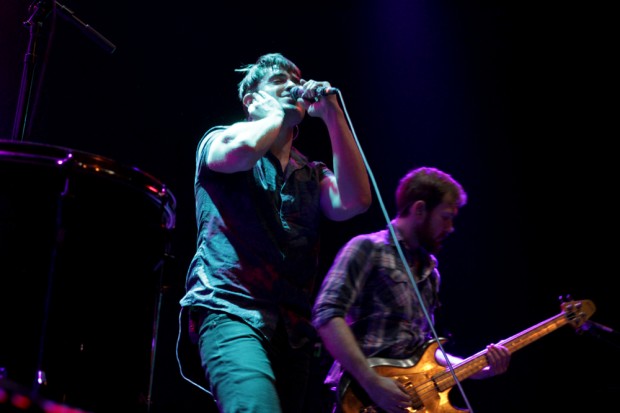 Luxley started off the three band show with a sirplus of energy. Backed by a three-man band, the New Orleans rocker Ryan Gray emphatically describes his genre as wildfire dance. And Gray lived up to the wildfire description wholeheartedly from the time he entered the stage to the time he had to be carried back over the barricade so he could leave it. Although Gray originally caught the crowd off guard with his over the top foot work and body rolls, Luxley’s infectious energy eventually got the audience on their feet and fully prepared for anything. Keep an eye out in early 2015 for Luxley’s debut EP Spirit. Can’t wait? Check out his single “Spirit” via Bandcamp in the meantime.

Milo Greene took over the stage with a celestial elegance evoked a different type of energy than Luxley’s feverish craze.

When it comes to this Los Angeles quintet, it is pretty safe to say that there are two types of fans in the crowd. The ones who love every component of their deeply invigorating harmonies, and the ones who just don’t know that they are fans yet. Celebrating the coming release of their new album Control, the ambient pop band played through a set of new songs, including the debuted single “White Lies.” Turning back the clock to their 2012 self-titled release, Milo Greene became one with the crowd as the entire room sang “1957.” After immersing themselves into a few more rewind tracks, including “What’s the Matter,” and “Perfectly Align,” Milo Greene hinted to a Philly return after the debut of their upcoming January release. If you don’t know you’re a fan yet, I highly suggest checking out their original short film Moddison and checking out Control January 27th.

Starting their set with “Overdone,” the entire venue pulsed with the every beat as strobe lights and bizarre animations showered the stage. From dancing constellations to swaying cobras to kaleidoscope masks, the Union Transfer stage was never a dull moment when Bombay Bicycle Club took over. Running through an entire set of dance ready, indie pop tracks, the English band played crowd favorites from all four of their full length albums, including “Whenever, Wherever,” from So Long See You Tomorrow and “Ivy Gold”, from 2010 Flaws. Pulling out a bit of funk, Bombay Bicycle Club covered a Robyn song “With Every Heart Beat.” As the show started to wrap up, the entire room chanted along with Steadman during “Always Like This.” Leaving the stage and coming back for a two song encore, the crowd still cheered for more until the chandeliers came back on.

Relive the entire show by scrolling though the photo gallery below, and checking out Bombay Bicycle Club’s setlist.

Bombay Bicycle Club Setlist:
Overdone
It’s Alright Now
Shuffle
Lights Out, Words Gone
Your Eyes
Home By Now
Whenever, Wherever
Eyes Off You
Rinse Me Down
Ivy & Gold
The Giantess / Emergency Contraception Blues
Evening/Morning
How Can You Swallow So Much Sleep
With Every Heartbeat (Robyn cover)
Feel
Luna
Always Like This
So Long, See You Tomorrow

Encore:
What If
Carry Me