I’m not gonna lie: The first time I was introduced to Shakey Graves, I was more than a bit skeptical. A fellow music nerd showed me a video of Graves jangling away on his arch-top guitar, stomping like mad on a suitcase-turned-kick-drum, yowling away about God knows what, and I instantly reacted with the obligatory “UGH. Yet another Mumford-esque, insipid, nu-folkster poseur.”

In the interstitial year or so, I’ve come around to Graves. And after seeing him perform live at a very sold-out World Café on Wednesday night, I must say: If it is all just an act, then it’s a pretty damn good one. Graves—the stage name of one Alejandro Rose-Garcia—brought his deeply rooted brand of stomp-folk to Philly in support of his brilliant, just-released album, And The War Came. 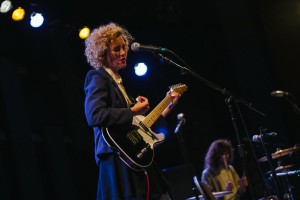 Supporting Graves on this tour were another pair of mouths from the deep-south: Gritty-yet-charming songstress Esmé Patterson and bluesy honky-tonker Joe Sundell. Patterson’s set was full of songs written from the point-of-view of other famous women in music history—name-checking Joni Mitchell and other greats during the introductions to most of her songs. With only her Telecaster and a nameless friend on drums, the effervescent Esmé had the audience swooning as her songs transitioned effortlessly from crunchy riffs to trills of her luscious voice. Sundell’s set eschewed the ethereal think pieces in favor of more grounded songs about life’s simpler pleasures. Sitting on a kick drum, Joe rocked licks on his guitar, banjo and several harmonicas, all while rambling pleasantly on about jokes, tokes and life in general.

Without much ceremony or gap between the acts, Mr. Shakey Graves hisself came out, briefly got his minimal amount of gear set up, toasted the audience with his bottle of Coors Light and started his set. After weaving his way through an elongated version of the anticipatory twang-core intro of “Roll the Bones,” Graves abruptly stopped and said “Well tonight’s been great, thank you very much,” and feigned heading for the door. From the very beginning, he disarmed fans and had everyone in the packed WCL in the palm of his hand.

For almost the next two hours, the rapt audience watched as Graves built song after song of his shambling, stumbling verses into stomping, rollicking choruses. Initially, I had been nervous that Graves set would be short and sweet¬—with only one album and an EP, I was pretty sure that we’d be seeing a small set. That proved not to be the case, as Graves (and occasionally his drummer and bassist) laid out a massive, sonically rich treat of an evening for those in attendance. In fact, he had so much material that I didn’t even get to hear my favorite Graves song played: the exceptionally well-produced and hauntingly emotive “Family and Genus”. 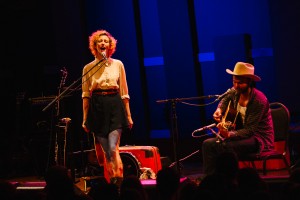 The standout moments of the evening came when Graves invited out opening act Esmé Patterson to sing with him on a few numbers. These duets are the highlight of “And the War Came,” their voices rising and blending—taking the pent-up emotion of Graves music to all new heights. The humourous mournfulness in “Dearly Departed” is electric live. I don’t mean Shakey’s electric archtop guitar—the very air itself feels bristles with electricity to hear them laying out their respective baggage against each other. A truly magical moment.

Without much in terms of frills, Graves captures something that’s beyond the reach of most tryhard nu-faux-folksters (fauxksters, even?). It’s hard to pin down that quality, but it could have even be his sheer genuineness itself that separates him from the pack. This was only Shakey’s first time in Philadelphia, and I’m that we’ll see him back—and in much bigger rooms—as he starts to get even more well-deserved media exposure, post-album. He might be a hopeless wanderer, but he’s certainly not a fake one.