Last month R5 productions announced that they would be scaling way on booking shows at the legendary First Unitarian Church basement (read full story here). Emo heavyweights Dads hit the stage Thursday night as one of the last regularly scheduled at The Church. Dads is on tour in support of their new album I’ll be the Tornado which was released October 17th on 6131 Records. I’ll be the Tornado shows huge strives in maturity for the band. They do away with the two minute tracks and tongue in  cheek lyrics seen on their first full length American Radass (This is Important) and put forth forth a much more thoughtful sophomore album. They brought fourth a huge amount of depth in their live performance, mixing slower, more introspective songs with their usual fair of loud high energy fair. In true First Unitarian Church style crowd surfers flew onto the stage during old favorites “Shit Twins” and “Groin Twerk.” Seeing Dads live I am always amazed by how the band can get such complex sounds with sofew people on stage. 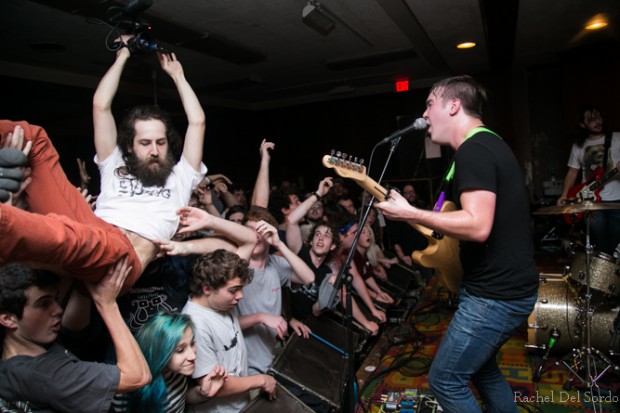 On this tour Dads brought with them Tiny Moving Parts and Nai Harvest. Hailing from the midwest Tiny Moving Parts have been making quite a name for themselves in the two years since the release of their first full length album This Couch is Long and Full of Friendship. Seeing the band live it is instantly clear as to why. Tiny Moving Parts song contain loads of complex guitar work and intricate drum beats. Watching front man Dylan Mattheisen intricately tap his guitar while passionately belting out lead vocals is a true sight to see.  The band commands the stage as fans push to front and sing along word for word.

The first band to hit the stage, hailing all the way from Sheffield England, was Nai Harvest. Newcomers to the Topshelf Records roster, this is their first US tour. Since their first full length album Whatever the band has been slowly shifting their sound from a loud in-your-face punk sound to a more nuanced indie pop sound. They previewed tracks from their new full length that will be released in the Spring of 2015, and you could tell their new sound fall right in the middle: loud instrumentals with catchy riffs and melodies creating a sound that is uniquely their own. Nai Harvest’s set really cemented them as a band to watch in the coming months.

Check out the full photo recap below.