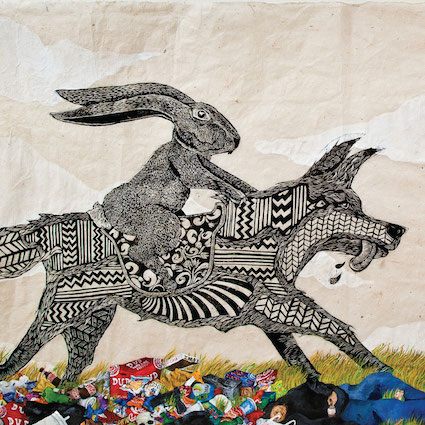 Somewhere deep in the recesses of Jon Loudon’s subconscious, in his wildest dream, or worst nightmare, he is picturing himself as the raw-throated, growling lead vocalist of one of the world’s biggest arena rock bands. He comes to in the middle of a break at practice, the reverie having left him with the chills, and one of his bandmates calls over, “how do you wanna do this take?” Loudon walks back to his guitar, picks it up and answers, “louder.”

And on LP3 (SideOneDummyRecords) Restorations are loud and fast and even soft and tender (they have plenty of that in them too) when they want to be, but mostly they rock, compulsively and beautifully. It seems so familiar and simple (Then why can’t more bands do it this well?): tempo, noise, and tunes, guitars on guitars on guitars. It’s a near miracle when you find a band that has somehow managed to imbue this kind of music with a sense of discovery, as if they’ve managed to rehear it as something new.

A great deal of that has to do with the changes they’ve worked in their music over the course of three albums, an additive process that has culminated in all the sonic touches to note and take pleasure in on LP3: Ben Pierce’s keyboard organ effect appearing all over the record, adding warmth, sinew, and a sense of space; the guitar work ranging from can’t resist riffs, to blues tinged guitar twang, to the tremolo picking that appears at least twice, most notably in a solo on “No Castle;” the high drone that begins, runs in the background, and eventually ends “The Future,” like the song is calling back to itself across a vast expanse; or the way the band allow “Tiny Prayers” and closer “It’s Not” to dissolve into screeching feedback.

The songcraft is likewise the work savvy musicians trying very hard but not making a show of it. Hear “Separate Songs,” a roughly three and a half minute record that is constantly adding and taking away. A sudden guitar blare blows away the opening riff, a big final chorus, “imagine that focus in real life/imagine going outside,” breaks down into a gentle, aching finish.

And when you listen through the three (sometimes four surely) guitar and keyboard onslaught, Loudon’s burr delivers lyrics which arise from various states of – and I place these scare quotes with feeling – “anxiety,” about failure, lives without meaning, wasted time, days of flux, disorientation at the world’s endless spin. But because the band leans so hard into the music, and because Loudon is often pushing his voice close to its limits, they never fetishize loserism, never give in to lugubrious self-pity, never stop being gutty and urgent, willfully alive.  So yeah, on “The Future,” when Loudon sings “sit inside, freak out about money and time,” damn right I feel him, but what I keep trying to hear is the line I can’t quite make out on album opener “Wales,” about “these protest songs.”

The emotional centerpiece is “All My Home,” an unabashed anthem (on an album regularly flirting with the anthemic) complete with oh-oh-oohs ready to be sung by thousands. It starts with a lovely interplay of guitar and bass arpeggios, swells with organ, then adds Carlin Brown’s usual (and sure to be underpraised) dexterous thumping percussion, builds into its first hook before the bottom drops out and we’re hearing a lovely ballad that crescendos into a moment so suffused with yearning, “these unfamiliar things we’ll call our own/And I will make it all my home,” it’s almost unbearable, except you want to hear it again and again.

It’s hard to believe what Restorations have done by the time LP3’s roughly forty minutes is over, I mean, young white men wielding guitars isn’t exactly a bull market in the music industry of 2014. This is a band listening deeply to and for themselves, in pursuit of markers only they know, sounding as if they’ve reached them, then left them in the dust,  subsuming their influences – punk, post-punk, emo, grunge, whatever you want – forging their own sound.

Restorations’ LP3 is out today on SideOneDummy Records; the band celebrates its release November 15th at the First Unitarian Church. Get tickets and more information on the show at the XPN Concert Calendar, and read our story about the making of LP3here.