Brooklyn’s Parquet Courts took the stage for Free At Noon and did not disappoint. Livening up a fall Friday afternoon, they launched right into “Slide Machine” off their upcoming album Content Nausea (to be released under the new moniker Parkay Quarts next week). Playing with precision, the group moved quickly from song to song; the audience bobbed and shook to the lively “Ducking & Dodging” and “Vienna II.”

The performance focused mainly on their album Sunbathing Animal , released this spring, except for another Content Nausea selection in “Uncast Shadow of a Southern Myth,” which closed the show and left the crowd lively and bristling with excitement. Parquet Courts plays a sold out show at PhilaMOCA tomorrow evening which is sure to be even more of a blast after getting a taste of their live performance this afternoon. Couldn’t make it out to today’s Free At Noon? Check out the photo gallery from today’s show and listen to the full performance below. 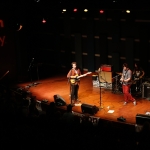