David Bazan and the Passenger String Quartet at First Unitarian

Sacred and Profane: David Bazan and the Passenger String Quartet at First Unitarian

Do you know how hard it is to take pictures and have a tearful, cathartic dump of pent-up emotions at the same time? Really freakin’ hard. It only took one song for David Bazan and the Passenger String Quartet to reduce me to a blubbering mess at last Wednesday’s poignant show in the First Unitarian Church’s beautiful sanctuary. 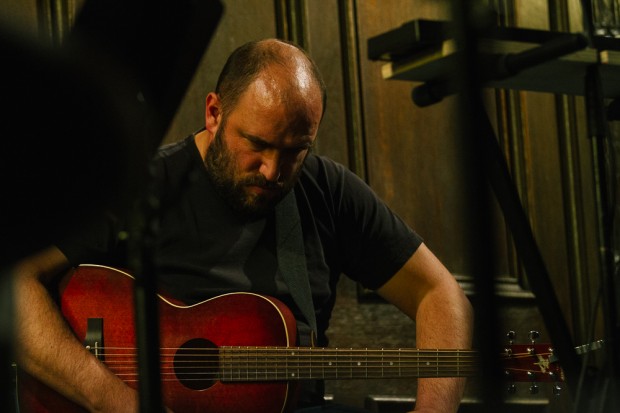 Hearing Bazan, best known as frontman and songwriter for Pedro the Lion, belt out loaded lines like “I moved my tassle to the left side of my cap/knowing after graduation, there would be no going back,” with the quartet mournfully keening away the new arrangement for “Hard to Be,” just completely broke me. Only a few months out from my own graduation, the memories of leaving behind a religious institution and its heavy-handed dogma are still fresh in my mind, and Bazan’s musical career rips open an old scab in my life that just never seems to fully heal.

Even though I haven’t fully given up on faith like Bazan seems to have, I find a ton of value in his deconstructionist lyrics—and am certainly more likely to call myself “cynic” than “saint.” His incredibly intuitive ability to blur the line between sacred and profane has been one of the hallmarks of his career, and speaks to his uncanny ability to attract and mesmerize a very diverse crowd. I’ve seen Bazan before with my pastor and other times with people who don’t believe much of anything, and the miraculous thing about David Bazan’s music is that that’s okay. Even though he’s post-religious, he’s kind to everyone—even brutally so.

“I’ve always wanted to play this room, actually,” Bazan said, responding to a question from an audience member on what his favorite venue on the tour has been. 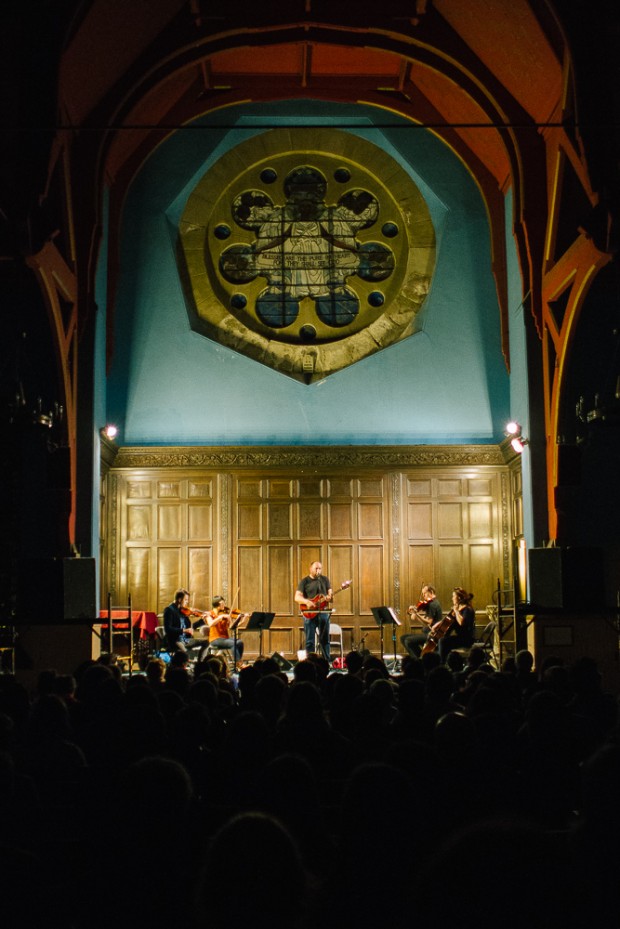 These mid-set Q&A’s are standard fare for any Bazan show—whether in a sprawling cathedral sanctuary or someone’s living room—and give a really neat peak behind-the-curtain that other shows just don’t have. The topics can be even more varied than the themes of his music; one minute he’d be reminiscing about how walking by a bar in Seattle will trigger autopilot of wanting to play a  rock show, the next he was musing about how a bear would eat a burrito.

After playing the Church’s renowed basement many times (most recently in 2012, for the 10th anniversary re-issue tour for Pedro the Lion’s “Control,” great show), he’s finally found his way upstairs. The sanctuary provided a beautiful—and prescient—setting for the evening. While the basement has been fantastic for his rock gigs, the sanctuary suited the rarified nature of his collaborative efforts with the Passenger String Quartet.

Although initially thinking that the PSQ would be more supportive than equally yoked partner to Bazan, I was quickly reprimanded as they handily proved their worth; translating the crunchy power chords and distorted solos typical of Bazan’s music into complex, well-wrought layers of tangible emotion. A interlude of their own early on in the set between the spiteful, lamenting “Wolves at the Door” and self-depreciating bar-jam “The Fleecing,” rose and fell, bridging both seemingly incompatible genres and two eras of Bazan’s work.

Bazan himself didn’t necessarily take a backseat to the Quartet, but also managed to keep his raw, gritty voice from overpowering them too much. Playing at times a ¾-sized guitar and a small synth, he gave most of the responsibility for the songs over to the quartet, letting violinist and arranger Andrew Joslyn’s designs take the experience of a Bazan show to destinations that I never thought possible. The rough edges and grating, passionate outbursts are all still there, just transfigured into something… Heavenly? Nah, Bazan would hate that. Wednesday night was something good. And I think the Unitarians could get down with that, too.