I finally learned how to pronounce “Alvvays.” It’s, uhh… Actually just the same as how you would say “always.” Ever since first hearing of Alvvays several months ago, I had been awash with confusion over the band’s name—in a similar manner to the CHVRCHES crisis when that band appeared on the scene a few years ago. But Monday night’s Alvvays show at Boot & Saddle was more than phonetically satisfying—the avvant-garde spellers also spelled out in no uncertain letters that they just plain rock. 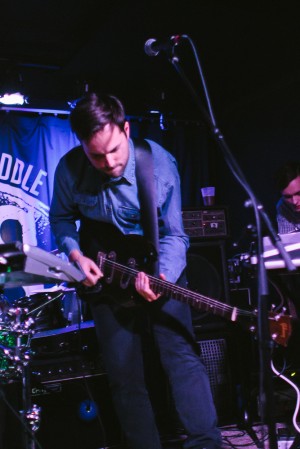 Fuzzy post-psych-ers Absolutely Free got the evening off to a bit of a slow start, but their energy ebbed and flowed into some really neat high points during their set. They risked losing my interest with a number of pads and artificial elements composing the core of their sound, but drummer Matt King saved the day with an absolutely brilliant performance, punctuating the otherwise mildly bland modality of the bands sonic landscape as he literally rose and crashed back down onto his drum throne.

After Absolutely Free wrapped their set, Alvvays was up on stage in no time. Needing no introduction to the packed-in fans at the Boot, they dropped right into breezy slow-burner “The Agency Group,” lead vocalist and guitarist Molly Rankin staring forlornly over the crowd as she crooned lyrics about failing in love. 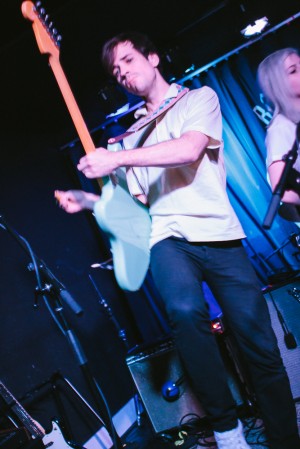 The melancholy themes that Alvvays deals with are both belied and assisted by the hazy, slow-moving jangle of the throwback-pop that makes up their sound. But they’re definitely not limited to the well-wrought jangle jams. With their debut self-titled album clocking in at a concise 32 minutes, it was imperative that they add something else, and the two or three other tracks (New? Old? It’s totally unclear) that made their way into the setlist were real jammers. Stripped of their trademark jangle, Alvvays still sounds rad, and I’m very excited to see what future releases may hold for both their sound and career.

Since hitting #1 on the CMJ charts with their first release, it seems like there’s no end to the possibilities ahead of the charming Canadian boys & girls of Alvvays. Even if people still struggle to pronounce it, they’re definitely going to be a name that’s on many people’s lips in the coming years.

Setlist
The Agency Group
Adult Diversion
Ones Who Love You
Next of Kin
Underneath Us
Atop a Cake
Dives
Archie, Marry Me
Party Police
Your Type