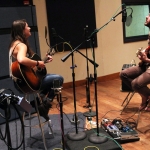 Reading, PA’s Caroline Reese and the Drifting Fifth – for our recording session, the Fifth was just one, Mark Watter – help to remind me why we’re here doing this whole Folkadelphia thing. All of this music we take in and care about isn’t just about virtuosity, pedigree, accolades, and next steps, it’s also, and maybe mostly, about having fun and spreading that infectious joy around. The duo was able to coax out that joy that exists, but is sometimes dormant, in the studio during an evening in late May. I think that speaks a volumes about Reese’s future as a performer.

When we invited Caroline and Mark to the studio, they were just on the verge of releasing a new set of songs entitled The Electric Year. You could feel the excitement beaming from the two as they loaded in and started to warm up. That kind of energy is contagious, no doubt about it, and for Reese and the Fifth, it didn’t seem to fade away or diminish as they started to record with us, it grew as they played. Can you imagine this attractive energy in a room of attentive listeners in a cafe, in a venue, in a club, in an arena? I can, and I very much wish that for Reese in the near future. Reese and her partners certainly have the goods in terms of that musical seriousness –  the virtuosity and striving work ethic I mentioned earlier, but they have the fun too. Lord knows we could all use some more fun.

We now invite you, dear readers and listeners, to hear Caroline Reese and the Drifting Fifth’s Folkadelphia Session. It’s a moment in time, a snapshot of a band enjoying themselves in the studio, not worrying about little mistakes. That’s what these live sessions are all about – being alive with the songs!