Alt-J warmed up the crowd at The Tower Theater
Events

Alt-J warmed up the crowd at The Tower Theater

It was a bitter cold evening last night in Upper Darby, where many traveled to see the British indie rock group Alt-J on their headlining tour in support of this year’s This Is All Yours. After the global success of their debut An Awesome Wave, which won the Mercury Prize in 2012, the band start getting the rep as “The next Radiohead.” Last night, they definitely lived up to it.

Opening the show was singer/songwriter, Mikki Ekko who’s best known for his collaboration with Rihanna in the song “Stay,” released in 2013. His current single is “Smile”, a loud and vivacious pop song with crooning vocals. Ekko’s performance was just the right bit of ingredients to get the crowd vamped up to see the British rockers.

The room fell dark into a cloud of red smoke and Alt-J opened with one of the singles from This Is All Yours, “Hunger of the Pine.” I must say, when the band entered and the girls in front screamed and shouted with excitement I had to ask myself, “Am I at the right concert? Is Justin Bieber actually performing?” Not to say that Alt-J ranks anywhere near the musically-challenged Bieber, but the #fangirl status was certainly present in the crowd.

Beyond the screaming contingent, the fan base consisted of every type of person: including older men in hockey jerseys, teenagers with braces, hipsters with thick rimmed glasses, and so on. It’s always an accomplishment for a band when they can appeal to every demo and psychographic.

The lighting was also a show in itself, bright and colorful and mostly foggy making it difficult to see more than a silhouette. The members stood in their places during the set, briefly mentioning that they were happy to be back in Philadelphia and grateful to all their fans in attendance. They rolled through all the numbers from both albums giving consistent energy throughout. Some of Alt-J’s songs are so vastly different that for one you may be crowd surfing to the poppy and hooky “Left Hand Free,” and then swaying back and forth to the slow and mystical “Warm Foothills”.

Overall, while it was a cold night, it was warm inside the Tower Theater. Alt-J’s wrenchingly beautiful and stylistically diverse music is only going to continue to grow and we can bet that the next time they’re in town, it will be at the Wells Fargo Center. 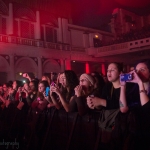 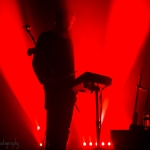