Restorations throw a wild hometown party for the release of LP3

On Saturday night, hard-hitting Philadelphia rock band Restorations throw an enormous party at the First Unitarian Church to celebrate the release of their third full-length album, appropriately titled LP3.  Friends, family and local fans poured into the Church to share in the celebration. Restorations also brought with them some fellow Philadelphia bands to share the stage with them.

Hurry, the new project from Everyone, Everywhere guitarist Matt Scottoline opened the show and provided the funny “HURRY up and buy the new Restorations album because it ROCKS!” banner which hung in the back of the stage from the entire show. The band also turned heads with their fun cover of Billy Joel’s “Uptown Girls” which can be seen here. Progressive punk band Three Man Cannon followed, playing songs from their recently-released their debut full length album Pretty Many People (which came outon Lame-O Record last September). The band captivated the crowd with their melodic vocals and airy instrumental arrangements, with a punk rock twist. Wrapping up the openers was pop punk three piece Cayetana, who owned the stage playing hit track after hit track from their new album Nervous Like Me. Ben Pierce, the keyboardist from Restorations even joined them on stage to preform their single “Dirty Laundry”.

Restorations hit the stage with a level of intensity unmatched from anything I have yet to see from the band. Fans belted out lyrics as them members jump around on the Church’s stage. Known for their hooky instrumentals and heavy vocals, Restorations might just take this formula to the next level on LP3, resulting in an incredibly dynamic live performance. Their set featured many songs off the their new album along with some old favorites from their back cataloge. In a crowd full of friends and family Restorations put on a show no one will soon forget. You can check out photos from the show below. 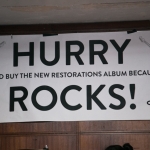