I hate to write reviews that sound like movie trailers, but the following needs to be said. In a world where much is the same, Lake Street Dive do things differently. In a world where drummers tune their toms low enough to make your innards shudder, Mike Calabrese tunes up (I’m also pretty sure he plays Spizzichino cymbals, which are any jazz drummer’s dream). In a world where, anywhere outside jazz clubs, low notes come from an electric bass, Bridget Kearny plays upright. In a world where bands seek to fill out their sound, Lake Street Dive strips it down. But being different only gets the glass to half empty. Lucky for me (and the rest of the sold out Union Transfer crowd), Rachel Price is nothing short of a virtuoso and the whole band seemed to be having more fun than just about anyone I’ve seen on the UT stage. I suppose there’s a reason there was a line around the block on a frosty Philly evening to see the Boston natives last night. 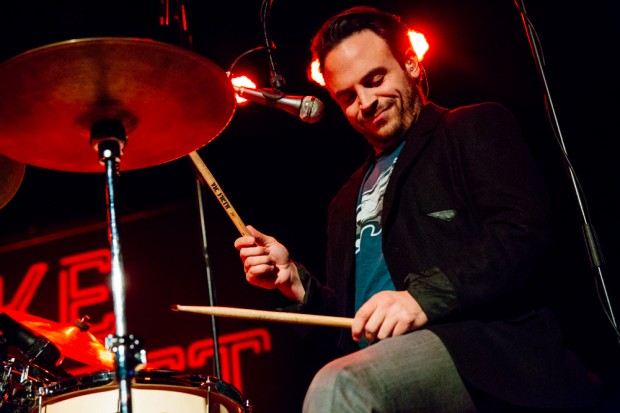 When the house lights went down, “Eye of the Tiger” blasted over the PA, which was weird, because I was pretty sure I was not at an Eagles game. But low and behold, out walks Calabrese, a Philly native, wearing a very apropos Eagles t-shirt. While he kicked off the beat to “Rabid Animal”, Kearny took the stage followed by Mike “McDuck” Olson. And just in time for the opening verse, Price greeted a roaring (and by now, defrosted) crowd. After shuffling through the rousing gospel tune, “What About Me”, Price got audience members to join her bandmates/backing choir for some call and response on “Clear a Space”. Before “Look At What Mistake” (a new track), Kearny and Calabrese made some gastro-centric confessions of their own, like dropping a phone into a bowl of salsa or spilling refried beans into Price’s purse (oops).

The title track off their latest LP, Bad Self Portraits, made up for whatever it lacks lyrically (writing a song about, for all intents and purposes, selfies poses some fundamental problems if what you’re going for is poesy) with that stylistic self-assurance that they’ve so well established. After a couple of new songs including a McDuck original called “Spectacular Failure”, whose title belies it (Calabrese really laid into the kit for some killer drum breaks), and a beautiful vocal breakdown on “Walking on Broken Glass”, Price showed off her pipes with some shiver-inducing vocal embellishments on “Use Me Up”. McDuck went full Dizzy Gillespie on his trumpet during “Wedding Band” (and it wasn’t the first or last time he’d whip out the brass). And speaking of solos, Kearny wailed on her bass during “Bobby Tanqueray”. In fact, she jammed out of her solo into Van Halen’s “Jump”, which I never though could sound so un-cheesy. “If you give me the choice between Van Halen and no Van Halen, I’m pretty much always going to choose Van Halen,” she added.

As for “Just Ask”, just… damn. Yeah, they closed with “You Go Down Smooth” and encored with the slow burning Calabrese original, “Got Me Fooled” (because Philly is his hometown, after all), which were both smoking good. But “Just Ask” burned slower. It burned hotter. The echo of Price’s soulful howl and those ghostly three-piece harmonies is still cozy with my cochlea. Pastiche as it may be, Lake Street Dive owns it. Like I said, you don’t sell out two nights at UT for nothing.