Catching up with Alex G at Rough Trade East in London

From bedroom recordings to all ages stages, Alex G has become somewhat of a popular name in Philadelphia music community. Since we’ve first written about the breezy lo-fi one-mand band, he’s gotten signed, gotten a few fellow musicians to help him play shows and even had an article written about him in Rolling Stone. What’s next on his list? Apparently he’s set out to conquer Europe.

Monday night, Alex G played a free show at Rough Trade East, a popular chain of record stores in the UK, to promote his new album DSU.  He’ll be in the UK until Sunday, playing a handful of shows in London and one in Manchester before he heads back to Philly. Being the cool guy Alex is, he was more than willing to chill with me backstage after the show to answer a few questions for The Key. Read the Q&A below where we talk about London, the Rolling Stone story and James Joyce.

The Key: So how do you like London so far?

TK: What are the biggest differences between London and Philly?

AG London’s a lot older. It just looks a lot more antique or something like that. There’s a lot of nooks and crannies in London.

TK: Is this your first time in Europe?

Random British guy passing by who somehow made his way backstage: That was really good by the way! That was fantastic. I really enjoyed that.

TK: So this is your first time in Europe touring?

AG: Thanks! [laughs] But, yeah I was here for a couple days when I was a kid, but it was just in Rome and I was a little bitch.

TK: Haha, why were you such a bitch?

AG: Well I just didn’t get how cool it was, you know? I look back and I was like ten or something I was just, like, mad because I wanted to be with my friends.

TK: It sucks going on vacations with your family.

AG: Yeah, I didn’t appreciate it at all.

TK: How was the Italian food in Rome?

AG: Yeah, I remember the food was incredible. 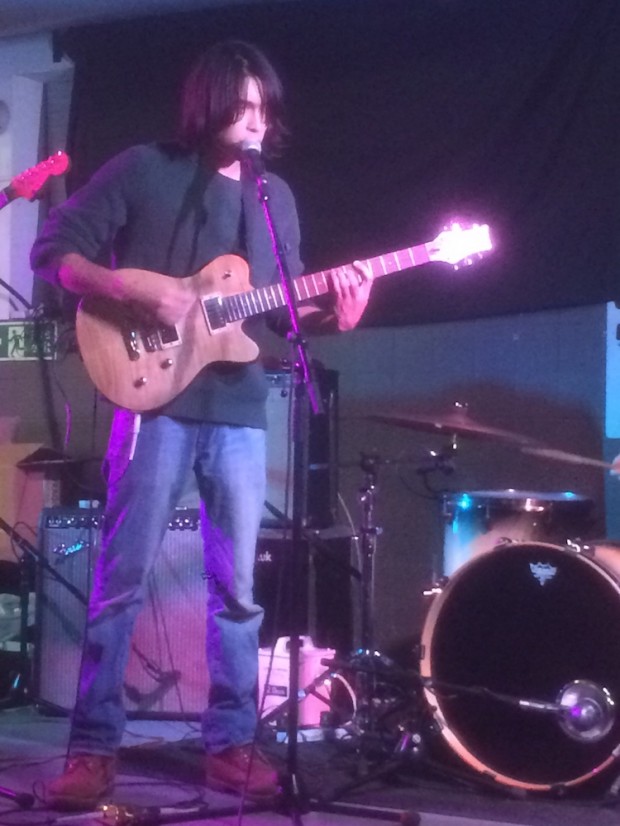 TK: What are the other countries are you going to be in?

AG: On this tour just the UK. And then in the Spring we’re going around the mainland, Amsterdam, Paris, and Rome. A bunch of dates.

TK: Do you still consider Philly your home?

TK: How did the Rolling Stone article come about?

AG: I got an email from the guy who wrote it, Simon. He said “Hey, I like your music. I’d like to do a piece on you.” I guess he just heard through the grapevine or something. I don’t know how he heard of it. Like, it might have been an intern of his I think who gave it to him.

TK: Was it weird?

AG: Yeah that was weird. The whole thing. Like, the photographers had me pose and shit. It was kind of funny. It was really new and kind of freaky. It’s kind of freaky being in exposed to so many people.

AG: I do all the recording stuff myself and then I have these guys learn their parts and shit.

TK: You play all the instruments yourself?

TK: How long are you in the UK for?

AG: Only a week. Just till Sunday. But we’ll be back in the Spring.

TK: What’s it like getting signed? Do you have a lawyer?

AG: Yeah, I got a lawyer now and a manager and stuff. It’s a little weird but I’m making money now.

TK: That was going to be my next question. So you’re just fully pursuing music?

AG: Yeah, I’m just not a great student. I was a mediocre student so I’d rather stick with this.

TK:Does a lot of your music come from stuff you’ve read?

AG: Yeah, I think my music has been influenced by some literature. I guess, it’s not the subject matter of the methods — and this is going to sound so fucking pretentious, but something that I can say is that I read James Joyce and his book [called] A Portrait of the Artist as a Young Man. Ever read that?

AG: And he’s just like, there’s a lot of stuff to get out of that book but something that I really took with me is the fact that he painted this picture of an imperfect character who’s kind of, like, a dunce. At the end of the book is like this poem written by the character and my teacher kind of made a big deal about, you know, like the flaws in the poem, and how it was a silly kind of bad poem and the author doesn’t give this to you outright but you’re supposed to infer it from like the context of the story I guess. I like creating like narrators of songs and stuff and I guess making the music. Providing a context for like what the speaker is saying and like having the speaker be like followable. Does that makes sense?

TK: Yeah, but are the songs based off of your experiences?

AG: I guess I shouldn’t talk about it too much because I don’t want to fuck up whatever people think of it.

TK: So you want to keep it open?

AG: I want to keep it up in the air. But I guess as far as the writing is concerned, it’s real inspiring what I learned in school, yeah.

TK: So going to school actually helped you become a rock star?

Check out this snippet of the song “Message” from the show:

And in typical Alex G fashion, this is how he ended his set:

For all youze guys back in Philly, make sure you get tickets to his Philly show at Johnny Brenda’s. It’s December 11th, and he’s playing with Cymbals Eat Guitars.  You can purchase them here.