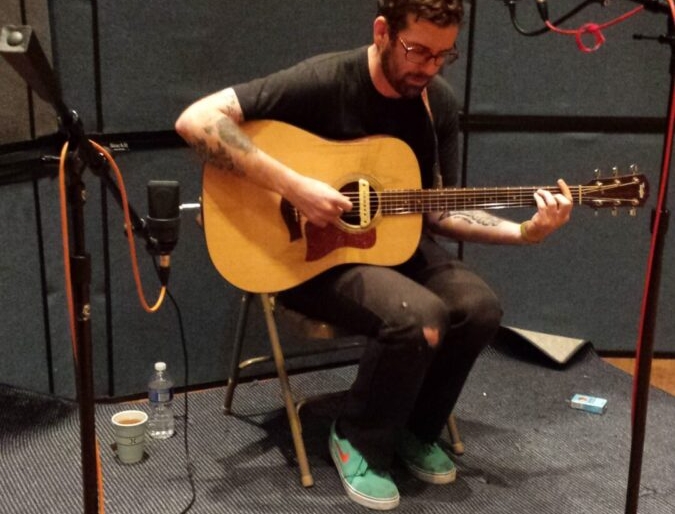 In my mind and for at least a good chunk of years now, Andrew Jackson Jihad have occupied a musical sector between sweaty basement punk rock and outspoken brash folk (I picture Billy Bragg or even Woody Guthrie) and I guess, the two are not so very different after all. Lyrically driven, songs with meaning, songs with humor, songs with a message, songs about life and living it and being a part of the world. They can be action oriented, acidic in delivery, absurd and totally irreverent in narrative, and sometimes very sweet. Many have done it before AJJ and many will do it after – to speak openly, to sing loudly, to share widely, but AJJ does it with a certain style unique to them. I became a fan late in the game and it’s with their new record, Christmas Island, that the band has totally made me a through and through devotee (I’m having a blast digging into the back catalogue), but even before this point, the band held a weighty stature for me in my imagined hierarcy of music. I always pictured AJJ live performances to be on par with religious congregations, with people chanting, waving their hands and moving wildly, maybe even violently. I see the room as blur of bodies and raw sensory stimuli where my own senses can’t quite get a solid read on anything. But it’s the unknowingness, the uncertainty, the fever pitch of it all, that makes the performance relevatory. I think folks would agree with that scene and I know I’ve heard many dazzled accounts by attendees of AJJ concerts.

I love featuring Andrew Jackson Jihad on a folk radio show because what they sing about and how they connect with the audience is 100% human. It’s not boiled down sentiment, it’s not some cookie cutter emotional experience, instead it’s gloriously weird and off-kilter. Just like all of us. We’re all special, unique, f-ed up snowflakes. I like to think that’s what AJJ is singing about, in a way. And we’re all in this crazy world together.

Back in June, we welcomed Sean Bonnette and his acoustic guitar to a chair sitting directly in front of a few microphones placed at the center of the WXPN Performance Studio at 3025 Walnut St. in Philadelphia. Not only did Sean share a couple of stripped-down takes from AJJ’s latest, but also a handful of covers from an wide swath of artists. What we end up with is this fantastic mixtape and snapshot of Andrew Jackson Jihad at present and the musicians that influence them – Neil Young, Perfume Genius, Dear Nora, Cheap Girls, and Mount Eerie.