20 Philadelphia artists we're thankful for in 2014

20 Philadelphia artists we’re thankful for in 2014

Last Wednesday, I sat onstage at Underground Arts as my boss Bruce Warren asked a deceptively simple question: “Why do you love Philly?”

We were there as a part of a State of Young Philly panel on the city’s music industry and cultural economy; Bruce was moderating and I was speaking alongside Chill Moody, Chris Ward of Johnny Brenda’s and Katonah Rafter of Fame House.

For me, the answer was obvious: the music! It’s the city I listened to and aspired to become part of while growing up in the northwestern ‘burbs of Montgomery County. Even as a kid I would always relish seeing a local artist get national attention – when I first heard The Roots in high school (opening for The Beastie Boys at the Civic Center in 1995), I was filled with an immense sense of pride that these incredibly talented people who had just played Letterman were from my city. That national attention comes a lot more often these days, no matter the scene or genre – DIY punk to hip hop to singer-songwriter to psych rock. Whatever music you fancy listening to, you can find an artist who excels at it in the Philadelphia region.

At the State of Young Philly event, I spun together an hour-long, Philly-centric DJ set showcasing some of my faves from recent years, and with the reflective Thanksgiving holiday upon us, I’m sharing the playlist with you: 20 local artists we’re thankful for this year.

Of course there are omissions: in a city this talented, there will always be omissions, especially when considering the constraints of 20 songs / one hour. The Roots are not in the mix (though Roots affiliate STS is), nor is Strand of Oaks, who made one of my favorite LPs of the year with HEAL. From that vibrant DIY punk scene, I wasn’t able to fit in The Menzingers, Amanda X, Restorations, Hurry, Thin Lips and many more. Dark atmosphere crafters Nothing and Dark Blue didn’t make it in the mix either, nor did punchy indie rockers Tinmouth, Commonwealth Choir or The Sixties, Americana bretheren TJ Kong and the Atomic Bomb, Levee Drivers, The Districts, psych torch-bearers The War on Drugs and Chris Forsyth….the list could go on and on, but I’ll stop here.

The point being: this isn’t meant as comprehensive (with apologies to those left out) as much as it’s meant as a snapshot of the region’s eclectic musical community that continues to impress us more and more each year.

1. Nick Krill (as heard via Heavy Blonde’s “Sun”) – The Spinto Band may be on hiatus, but frontman Nick Krill keeps busy via other projects. His band Teen Men, which is working on its debut LP, and Krill takes on production work in general that’s quirky, stylish and sweet. I opened the mix on a mellow note with this gem Krill recorded and produced with Scranton-Brooklyn combo Heavy Blonde. The vaudevillian vibe of “Sun” totally recalls theatrical Philly crew The Teeth, and the saxophone part is divine; you can hear Krill’s stamp on this.

2. Milton (as heard in “Everybody Knows”) – The rich voice and funky bounce of Reading’s Milton is winning; he’s a throwback to the neo-soul 90s but sounds undeniably current. He dropped his albumSimple Pleasures on Valentine’s Day, and yeah, you’ll love it. 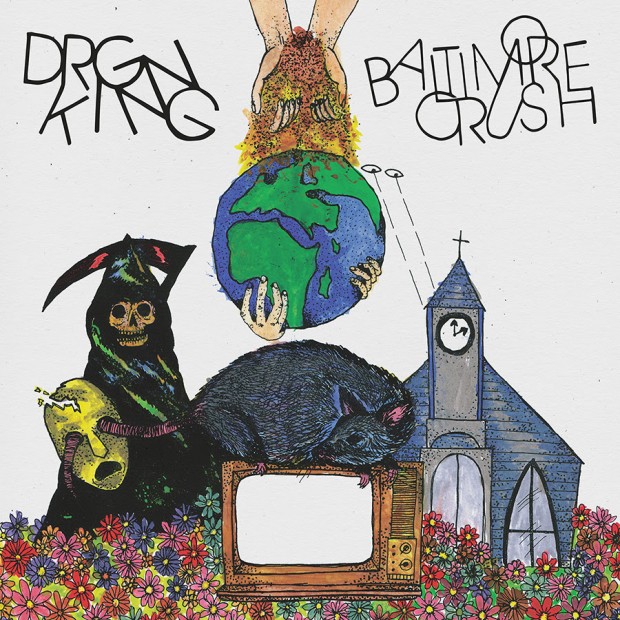 3. DRGN King (as heard in “Hazy Memories) – Local rocker Dominic Angelella shines on his band DRGN King’s new Baltimore Crush. An infectious fusion of catchy hooks, dancefloor beats and groovy tapestries, this album sits at the sweet intersection of pop and rock. Plus those joyful shoutalong choruses that tap deep in teenage alienation: “One more summer, we can take it all / I think they hate me but I’ll carry them all in the fall.”

4. Cayetana (as heard in “Serious Things Are Stupid”) – Speaking of teenage anthems, Cayetana’s Nervous Like Me is a brilliant LP filled with catchy punk songs that are at once intensely personal and universal. Augusta Koch spins lyrical tales so vivid you can find yourself somewhere inside, no matter where or when you’re listening from, and their role as a power trio of women in a male-dominated scene is not to be overlooked either.

5. Lushlife (as heard in “Magnolia”) – Lush has been a bit quiet this year, but we know the art-minded hip-hop creator is still creating – sources tell us the new album is progressing nicely, and I haven’t stopped listening to Plateau Vision to be honest, so that’s all good.

6. Chill Moody (as heard in “Cotton”) – Chill is the face of DIY hip-hop in Philly. A veritable social media and marketing machine, he continues to make strides in his craft, from singles to music videos to ever-growing live music events. At the State of Young Philly panel, he talked about the idea of a label versus going it your own; he said when he started rapping in 2010, he ultimately wanted a label, but he’s at the point now where he feels like he’s just fine without one. That’s an awesome place to be.

7. CRUISR (as heard in “Kidnap Me”) – These jangley hook-masters have been on tour with The 1975 this fall, playing huge rooms and hanging out with Taylor Swift. Their EP on Vagrant is super catchy, they jam packed Boot and Saddle this fall, and I see big things for them in 2015. 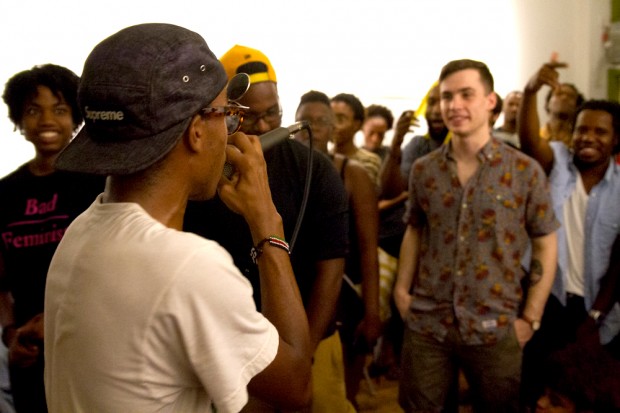 8. The Bul Bey (as heard in “Where I’m From ft. Davon”) – This newcomer to the Philly rap scene, an affiliate of DJ Matthew Law’s Illvibe Collective, is an absolute blast. As a performer, his energy is at peak levels the entire time he’s onstage, and as far as his songs, “Where I’m From” is about par for the course in terms of lyrical sharpness and a good BPM.

10. Tiani Victoria (as heard in “My High ft. Spade O”) – One of my favorite discoveries from the Philly hip-hop scene this year, Tiani has hooks and charisma and has released a solid string of singles in anticipation of her debut LP Hard Candy. Like Cayetana, she stands out as a strong woman in a male-dominated scene; also like Cayetana, her music is outstanding regardless of gender. She’s not “an awesome female rapper,” she’s an awesome rapper, period.

11. Modern Baseball (as heard in “Broken Cash Machine”) – One of the most exciting things I saw this year was Modern Baseball’s set at FEST in Gainesville, where some 3,000 enthused kids packed 8 Seconds, riled up and swaying back and forth, and ocean of punks spilling onstage as the band rocked out to “Broken Cash Machine.” That MoBo has blown up so heavy is one thing; that they remain the most down to earth sweethearts in spite of it is something else entirely. 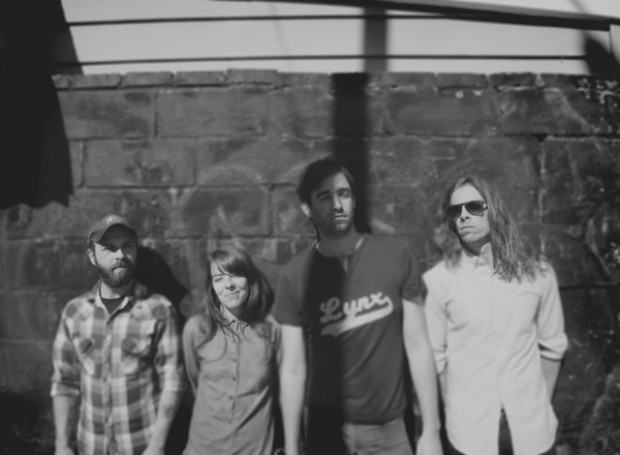 12. Hop Along (as heard in “Sister Cities”) – It’s no secret that I think Hop Along is one of the best bands in Philadelphia. I am unbelievably psyched and proud that they got signed to Saddle Creek Records, and the record they’re currently making with John Agnello is going to be one of next year’s best. I’m so psyched to spend New Years’ Eve with them at Johnny Brenda’s.

13. Beano (as heard in “Let It Go”) – Chill Moody’s long-standing sidekick is getting ready for his close-up. Beano’s “Let It Go” single this year is a rollerskate jam; a great specimen of retro R&B, a motownphillysbackagain-style knockout. He’s working on his first LP and if it’s going to have more like this, I’m all ears.

14. Good Girl (as heard in “Sleepin’ Alone”) – Speaking of throwback R&B, it’s been one of my favorite trends in the Philly scene this year. Good Girl could be our TLC, our En Vogue or Spice Girls; their mixtape 90s Kinda Love is pretty much required listening. 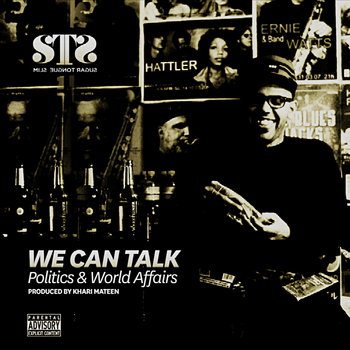 We Can Talk Politics and World Affairs by STS

17. STS (as heard in “WWW ft. Count Justice”) – STS gets massive points for the incisive social commentary on his We Can Talk Politics and World Affairs EP and his smooth and suave single “How Philly Use to Sound.” But this Philly rapper by way of Atlanta (“Philly’s favorite southern rapper” he says) is incredibly skilled at bringing the party and “WWW” is his anthem.

18. Verbatum Jones (as heard in “With You ft. Faylin Johnson”) – When you meet him, Verb comes across as a friendly nerdy dude who you could easily get in a 20-minute conversation about iPhone apps with. But then you turn on the mic, and he becomes a calm and confident rapper rocking introspective rhymes over killer beats. At least that’s how it went down when he recorded a Key Studio Session. This romantic tune “With You” comes from his winter mixtape, released last November.

19. Brielle (as heard in “144,000”) Like Jhené Aiko is doing on the national level, Brielle is taking an interpretive, abstract approach to Philly R&B. The 24-year-old singer and songwriter released The Rough Break-upthis fall and it’s very unique. The beats are downtempo, the arrangements are smart and non-traditional (no verse-chorus-verse here), there’s a good incorporation of trippy electronic pop; it’s definitely unusual, but totally easy to listen to. Another one to keep tabs on in 2015.

20. Roof Doctor (as heard in “Bottle It Up”) – Indie rock of the very trad sense (think Pavement, Built to Spill), Philly’s Roof Doctor made a winning debut this year with Mobile Freedom Home, an album that’s tongue-in-cheek fun as much as it’s an honest portrait of the hardships and joys of twentysomething life.