The means of production guiding our favorite songs and records are, to a great many, shrouded in mystery and reverential confusion. How do guitars make screaming noises? Do snare drums of different sizes pop at different pitches? What, exactly, is an EQ?

Gear Stories seeks to bridge those gaps by offering insight into what our favorite local artists are playing, what those pieces of equipment mean (or don’t), and highlight the unique means by which Philly musicians and gearmakers are constantly pushing the aural envelope. From Gamble & Huff to Questlove, Philly artists have led the way in sonic innovations and left their imprint on generations of music around the world.

For our inaugural installment, we spoke to Purling Hiss frontman and guitarist Mike Polizze last week while he and the band toured in support of their latest album Weirdon, out now on Drag City records. Among other aspects of his technical evolution, Mike addressed his minimalist set-up and its importance to Purling Hiss’s guitar-centric, hazy sound.

The Key: So we’re sure, where are you guys right now?

Mike Polizze: I think Carlsbad? We’re somewhere between LA and San Diego right now. I’m standing by a pool, in a T-shirt [laughs].

TK: Awesome. So, tell us about your gear. For the gear heads reading this, what are you using?

MP: You know, it’s funny…I’m not a gear head at all. I use my ears to guide me, and I have a real simple set-up. My guitar is a Fender Stratocaster – a 90s reissue, Mexican-made. My amp is an Ampeg VT-22 head, 100 watts, really loud. My pedals are…I use a Vox Wah pedal, which I don’t actually use a lot those days. I still use it, but I don’t sit there going “wah wah wah” all the time. I also use an Electro Harmonix boost pedal just to boost the signal. And I use a Russian Big Muff pedal. That’s a pedal that Jesse [Trbovich] from Kurt Vile and the Violators, who makes pedals and knows schematics, he modified that one. I also started using the MXR Carbon Copy delay, which I use every now and then live. 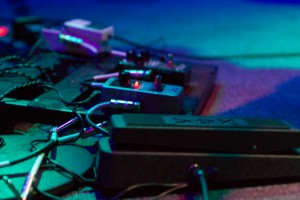 A close-up of Polizze’s pedals. Photo by John Vettese.

TK: It’s surprising that your set-up is so simple. I’m not sure that people would assume that, given how central that big, fuzzy guitar sound is to your music. In terms of getting the sound that you do, does just having a big amp allow you to make this sound?

MP: Well, I want to make it clear – live, for the music I play now, the set-up is simple. But on the recording and studio side, where you can try other things, I do want to get better with that and build a studio. I’d use that stuff if I could afford it, but it’s all about money and resources. The goal is to have a studio where I can have ProTools, an endless amount of preamps, pedals, microphones…you can’t get enough of that, because you can really manipulate and do so much in the studio. But, when it comes to playing live, we’re a rock band, and if you want to be in a loud rock band…I mean, you can have a loud amp with shitty tones, and I lucked out with my amp. It’s from the 70s, and you can run a guitar or bass through it. 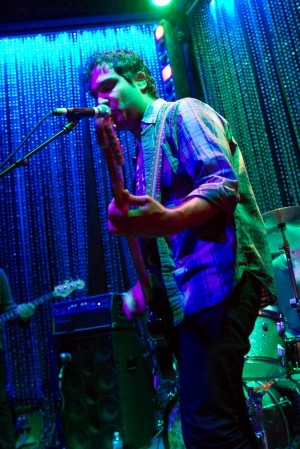 TK: Would you ever expand or reinvent your live set-up? For instance, would you get a bunch of pedals and go full Kevin Shields [My Bloody Valentine guitarist, whose drone-like guitar sounds were cultivated in part by using many pedals]?

MP: Yeah, I’m okay with building onto a pedal board. I used to make fun of the whole “pedalboard aesthetic” and say, like, “That’s not punk rock! Just plug into your amp and play!” But it’s not like I’m having pedals do things for me. I love the little flourishes of extra pedals, but I don’t go too overboard with them. Six, seven years ago when I was playing with Birds of Maya, it was the same thing. When I started with them in about 2004, I would just plug straight into the amp, and then added an MXR Dynamic Compression to help with signal boost. It was only when I started with Purling Hiss that I added a pedal board. I’m open to anything, but I don’t see myself ever having a crazy set-up.

TK: That makes sense. It seems, then, that a lot of your sound has to do with your technique, which is probably true for any instrumentalist. It sounds like you use a lot of whammy bar in your  live playing for tremolo and feedback control. Do you?

MP: Yeah, I don’t want to rely on it but I like to – it’s funny, because I say I like to do unconventional things, but the whammy bar has always been such a staple for electric guitar. But, whammy bars were used differently in the 50s and 60s for tremolo sounds, and then you had Van Halen using it in the 80s for dive bombs and that sort of thing. Now, it’s kind of this devolved thing where I get gnarly feedback and use the whammy bar to warp it into something different. So, it’s integral in some ways, but I don’t like to rely on anything too much.

TK: Yeah, and it seems like that’s more of a way to warp the sound live, whereas that kind of sound isn’t as present on the records.

MP: I think that I’ll bring back that sound more on the next record. I mean, when you think about the last two records…I’m browsing my mind, and there’s not really a lot of whammy bar craziness on them! It’s mostly in live shows. So I’m gonna change that [laughs].

TK: Very cool. So it’s a pretty common experience for bands to be robbed of their equipment, especially when it’s vintage and very specific like some of your gear is. Have you ever had anything stolen on the road?

MP: Oh man, no! Why’d you bring that up? Now I’m jinxed! [laughs] But I’ve been lucky. I’ve picked up little things along the way. You can never completely trust where you’ve parked, but you do certain things to avoid putting yourself in…I don’t know how it happens. Like, maybe there’s some scammer who checks out when bands are coming to town? Maybe it’s random? I don’t know quite how you can avoid it. 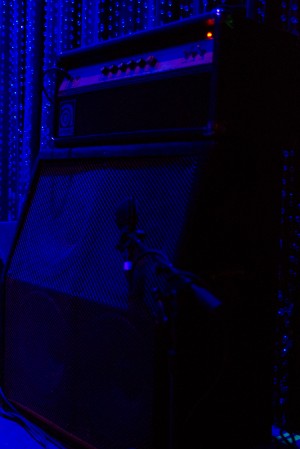 TK: Yeah, and the reason I ask is when it happens to bands, they have to rebuild and it might affect certain aspects of their sound.

MP: That’s the thing for me – it’s nice to feel that we have our own sound, but I don’t want to rely on that equipment alone. Like, I don’t know that I could go out and get an Ampeg VT-22 head tomorrow. But I could probably get a Fender amp, and just kind of do what I do and make it work. There are some people out there who love their gear and it’s really precious, and if it gets taken, they’re fucked.

TK: So, no robberies, but any big malfunctions that affected shows?

MP: Oh yeah. I’ve had my head die on me before. And there are times when some pedal won’t work, but we always get through it. It actually happened the other night, when we were playing in Seattle – and by the way, the West Coast shows have been great – the power was going out on my pedal board. But it wasn’t until the end, and we got through it. It’s always just been a thing of like, “Fuck it, these pedals aren’t working, I’m just going to take them out and plug right in.” You just have to know how to role with it and not have a meltdown.

Mike and Purling Hiss play the Arden Gild Hall in Arden, DE this Saturday. Thunderhank and St James & The Apostles open. Click here for tickets and info, and check out more photos of Mike’s set-up below.