Hometown Heroes: Strand of Oaks hug it out, HEAL it up at Union Transfer
Events

Hometown Heroes: Strand of Oaks hug it out, HEAL it up at Union Transfer

“You know, I’ve been doing this for a long, long time,” frontman-of-Oaks Tim Showalter said, “and for a while I was playing to like three people at shows—like you three… But now? All you people, in this place… incredible.” Showalter was clearly moved to see the massive turnout for their largest hometown set and largest headlining set to date.

After releasing one of 2014’s most quietly celebrated albums, Philly’s loneristic folk-rockers Strand of Oaks arrived back at home on Wednesday night after six solid months of touring. But that was all “just practice” for the main event. Hitting the stage to the sound of the Boss’ “Born in the USA,” it’s impossible to miss how important having a strong community presence is to them. Showalter’s unbridled giddiness to be playing the show belied the sheer unchecked slay of the evening—Oaks doesn’t fuck around when it comes to their music. 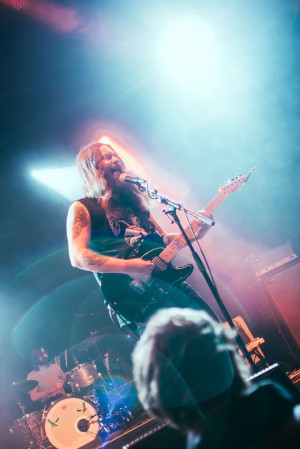 Ripping through a sonically massive, hour-and-a-half set, my jaw spent the majority of the evening on the floor. Colossal riffs rolled like thunder from Showalter’s Telecaster, as he himself would stomp about the stage, leaving the audience in awe. Bassist Devin Craige also took cues from the pantheon of rock gods, absolutely crushing the low-end of the aural spectrum as he tore away at his instrument. The simple stage setup and lack of any decoration was a testament to the fact that Oaks are 100% about the music.

It’s hard to pick out any kind of “highlights” from a show as purely inspired as last nights. As I’m sure you’ve all already heard, their Ryan Adams cover of “My Wrecking Ball” was on point—but the unexpected Replacements cover of “Alex Chilton” that began the encore painted a clear portrait of a band simply at home. “If we fuck it up, we’re supposed to fuck it up—that’s what it’s all about,” joked Showalter before diving headfirst into the jaunty tune.

Personally, my favourite moment of the evening came when Tim invited legendary lap steel player Mike “Slo-Mo” Brenner to join the band, and lay down the utterly devastating guitar part in “JM.” Having one of Jason Molina’s collaborators playing on a track in his honor made the chorus of “I had your sweet tunes to play,” so righteously painful to hear, the wailing riff that followed cutting quick.

Finishing up their encore with a blazing jammed out take on “For Me”, Showalter ended by throwing down his axe and vaulting off the stage and into the standing crowd. Arms wide open, he pushed his way back, a snowplow of hugs and smiles. Taking a literal victory lap around Union Transfer, he celebrated not only he and his band’s music, but also the vital community and healing that is happening through music right here in our city.