By Rachel Del Sordo
December 05, 2014
10:12 AM
Share
The World Is A Beautiful Place and I Am No Longer Afraid to Die | Photo by John Vettese

While interning for WXPN, I photographed tons of shows at the World Cafe Live. Countless guy/girl with guitar singer-songwriters, heaps of Americana influenced alternative rockers, and a solid handful guys-from-old band-make-new-band-with-guys-from-other-old-band bands. Friday night was different, though. You see, last Friday night The World Cafe live opened not only their doors and their mind, but also their soul, to the (hashtag) Emo Revival with a show headlined by dramatic Connecticut nine-piece The World Is A Beautiful Place And I Am No Longer Afraid to Die.

First up was a band called Posture and the Grizzly. They were the only band I had not heard of prior to the show. They sounded exactly like a band that should be opening up this show; their style mixed sonic elements I would expect to hear from the bands lined up to play after them.

Sadly not too many people were there at the beginning; the show suffered from a “lack of punk rock time,” starting exactly at its listed time. Many fans filed in towards the end of their set. This might have been one of the reason why I felt their performance fell a little flat that night. While I enjoyed listening to their album Bushed Hymns,their live show left something to be desired. 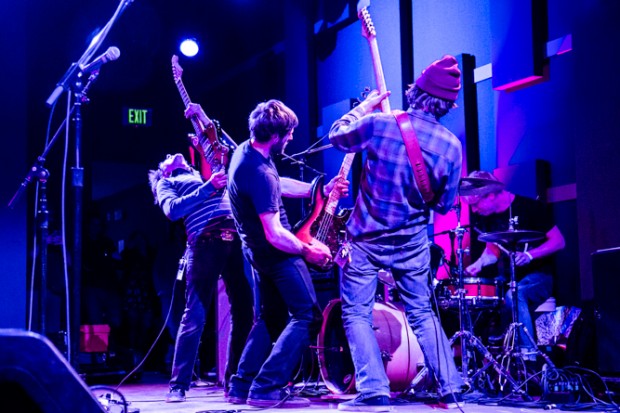 To be honest when I first heard Rozwell Kid’s debut album Too Shabby I didn’t exactly get it. The band sounded like Weezer mottled with power pop riffs circa late 2000’s. Well about five seconds of watching this band live left me eating my own… thoughts. Rozwell Kids have one (if not thee) most dynamic live performances in the game right now. Band members moved around the stage swinging guitars in a somewhat choreographed fashion. Their vocals and instrumentals were spot on. It was pretty obvious that most of the fans at the show were not familiar with their music. It was fun to watch people get more and more into the band as their set went on. Rozwell Kid proved that they are one of the most promising up and coming acts right now. If you have the chance to see Rozwell Kids in the next few month, seriously, don’t let it pass you by.

Keeping concert goers on their toes The World Is decided to add a surprise special guest to the line-up for Philly date, none other than Philadelphia basement scene staple turned Rolling Stone wonder boy Alex G. Fresh off the heels of their first European tour, it seems as though there is nothing stopping this Alex. The band’s music really took well to the big room – on the record DSU it’s very quiet and lo-fi, but at a concert Alex G comes across like a rock band. Their mix of technical nuances and an experimental edge really shined in the large venue, and the band proved to be a very welcome addition to the show’s already-stacked lineup. 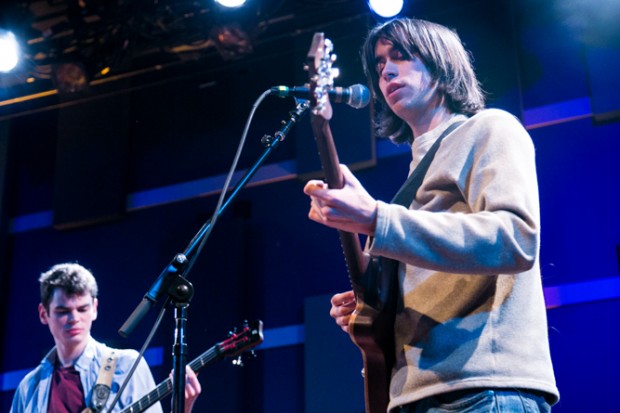 Next up was The Hotelier, and this was the fourth time the band has played Philadelphia this year. Even with a total saturation of the market it was clear that they brought a ton of fans to the show. Die hards pushed to the front to sing every song word for word with the band. This was my fifth time seeing The Hotelier since June (attending all the Philly shows and seeing them at FEST) and I have come to realize that I can always count on a consistently solid set from this band.  It takes a lot to be able to see a band so many times in such a short period but I can honestly say standing in a huge mass of people, singing “Your Deep Rest” at the top of my lungs hasn’t gotten old yet.

Watching The World is a Beautiful Place & I am No Longer Afraid to Die is like watching a Broadway production. It’s dramatic, emotional and there is a lot going on. The “a lot going on” part was elevated at this show as they welcomed poet Christopher Zizzamia on stage. Their latest album, Between Bodies, is a collaboration with him, with pieces written in the wake of a close friend’s death. As far as the way the spoken word translate in the live performance, I thought it felt a little disjointed. It felt weird watching someone do spoken word over an eight piece band, and intermingled with TWIABP’s other songs, it took away from the flow of concert. That being said, The World Is still put on a great show. The songs from previous albums still carried the same intensity as that I have come to love and expect from the band. Hopefully spoken word is just a phase. 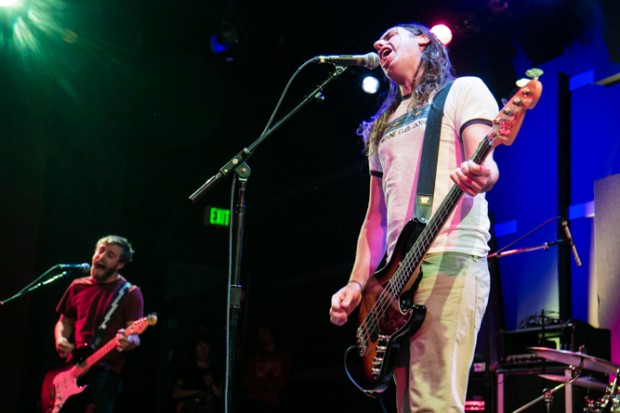 As  far as seeing this show at a venue that doesn’t normally gigs like this one, it was a mixed experience but good moreso than not. With a lineup that’s too big for The Barbary or The Fire, but too small for Union Transfer or The TLA – and a lineup that needs to be all-ages, that wouldn’t work in a 21+ space like Underground Arts – World Cafe Live was pretty much the spot for the show. Did it have the stage diving and chaos these shows are known for? Short of some mosh pit action during The Hotelier and The World Is, not really. But it sounded great, looked great and The Hotelier even remarked that it felt like the most real venue they’ve played. Here’s hoping World Cafe Live hosts more shows like it… and takes those tables away from the front of the stage. 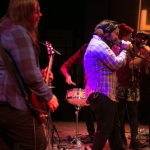 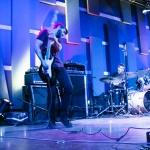