Rivers and Roads: The Head and The Heart at the Tower

Rivers and Roads: The Head and The Heart at the Tower
Events

Rivers and Roads: The Head and The Heart at the Tower

“Summer’s gone, now winter’s on it’s way,” cooed Josiah Johnson, lead singer of The Head and the Heart. “I will miss those days we had.” Friday night was rainy and cold, far removed from the days of summertime. Making the chilly trip out to Upper Darby to see Johnson’s Americana-storytelling folksters at the Tower was a great reminder that winter is indeed right around the corner, just like the lyrics of “Winter Song” mournfully recall.

Making a cold, wet journey all the way out to the end of the El to see the band seems only appropriate, in retrospect. After all, so much of their music is a Kerouac-esque travelogue, and one that is steeped in seasonal allegories, at that. Their most recent album—2013’s Let’s Be Still—is mostly centered in the warmer, happier climes. That might be the reason why cuts from that album seemed to fall a little flat during their set, at least to me. I’ve always been able to relate better to the more regretful and introspective ballads from the band’s 2011 self-titled release. 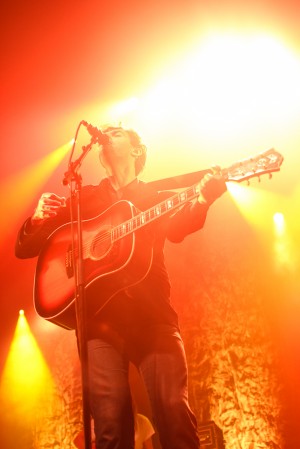 Seeing songs I’ve been in love with for years was deeply powerful. Even without soaring choruses or building pinnacles in many of their songs, the simple relate-ability of The Head and The Heart’s songs is what makes them so excellent. Most of the newer songs were well-knit, but didn’t have the same tangible tempering of loss and gritty reality that made the first album so important to me.

As good as the music and storytelling, it would be unfair to not critique the band’s stage presence, at least a little bit. I hate to agree with the drunk bro archetype standing behind me, but when he muttered “This guy is so lame, what’s even happening?” (as Johnson took his sweet old time moseying about the stage, prior to the encore) I reluctantly found myself on the same page.

Although there was a fair bit of life in their set, it was definitely lacking. Early on in the night, Johnson and partner-in-crime Jonathan Russell would often find themselves smashed shoulder-to-shoulder, belting out a line, or dueling guitars. Once, Russell even jumped off the stage, grabbed a front row fan’s phone and took a picture of Johnson. However, the energy appeared to wane quickly as the band worked through their set.

Also appearing in the opening spot was alt-pop group Phox, fronted by the fantastic Monica Martin. Martin and her band worked their way through a sleepy yet resonant set of tracks from their debut self-titled album. After selling out Boot & Saddle earlier this summer, it’s exciting to see them on the bill with The Head and the Heart, and hear them making big sonic strides, as well.

Even with my minor gripes in stage presence and new songs, I won’t say that I didn’t enjoy myself. The band has changed—and so have I. They’ve matured in tone and songwriting, and I’m happy for them, even if it’s not the same material that resonates with my soul. Seeing them fill up a big, beautiful room like the Tower was superb, but oh—I will miss those days we had.