All Grown Up: Modern Baseball comes of age at the TLA
Events

All Grown Up: Modern Baseball comes of age at the TLA

Well, they finally went and did the damn thing. Modern Baseball sold out. Sold out The TLA, that is. On Thursday night, the loveable West Philly punks headlined an absolutely stacked lineup of bands and defended pop punk, hard. The evening was marked with smiles, tears and even some special guests, and the homeboys clearly enjoyed working their largest hometown crowd to date.

The evening kicked off with several quick sets from four up-and-coming bands who share the scene with Modern Baseball, and know how to rock the stage almost as well. First up was Boston’s Somos, whipping through a quick set of tunes from their debut LP Temple of Plenty. While their set was solid, it also didn’t have much in the way of memorable moments, and was quickly overshadowed—for me, at least—by the bands who followed them up on the bill. 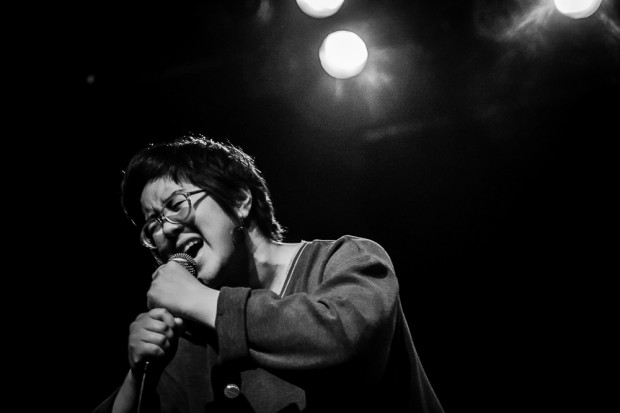 The next one of those bands was the chiptune-infuesed power-pop three-piece Crying, and their jams had the audience doing anything but. Lead singer Eliaza Santos’ voice rose in and out of a mix bubbling with 8- and 16-bit infused bars, singing about mundane-turned-magnificent events like in “Bodgea Run”. Even though I was a bit disappointed to see that the retro chiptune parts were relegated to a backing track, Santos and her band’s utter drive to blast off made their set one of the most fun of the night.

I don’t do end-of-the-year lists. I just don’t. They’re hard and arbitrary and someone is guaranteed to yell at me for their favorite band or album not making the cut. But if I had to, I’d say that The Albatross by Foxing would probably be my number one album of 2014. Impossibly heartbreaking and wonderfully toeing the line between ethereal self-awareness and gritty, absolute emotional devastation, it’s a masterpiece of the “post-emo revival” or whatever the hell wave we’re in right now—they even got hand-picked to open for legendary pretty princesses of emo Brand New. After passing on their double-header of shows at the Fire and Michael Jordan when they were last in town this summer (huge mistake, BTW), I was beyond exited that they would be on the bill for MoBo’s hometown show. 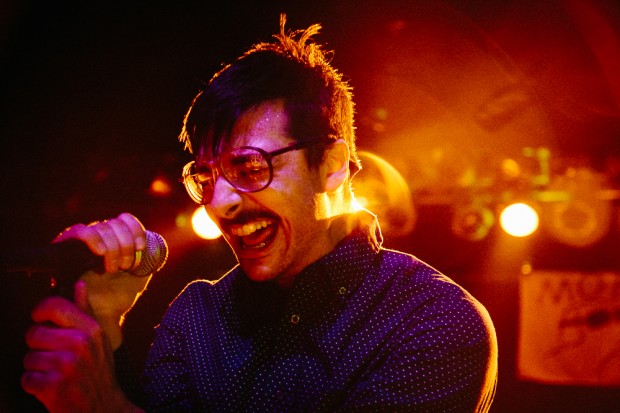 After a long and painfully hilarious intro of Céline Dion’s “My Heart Will Go On” mixed with clips of dialogue from Titanic, the Foxing boys trotted out on stage and set about laying waste to the TLA. Frontman Connor Murphy was an outright animal, stomping the stage with gusto, literally tearing apart his mic stand as the set progressed. Numbers like “Bloodhound” started innocently enough with delicate guitar parts, but would end in cascading layers of guitars and drum, crashing to a finish. I knew it was going to break me. When the opening piano chords of set-closer “Rory” started, I welled up instantly. Murphy’s lyricism wears his heart on its sleeve at all times, and no track showcases that fact more than the screaming bridge of Rory, where he breaks down begging after unrequited love. Anyone who’s ever loved or lost will be able to relate to Foxing. And that’s all of us.

I can’t say that I was a big fan of Knuckle Puck’s set. That’s not to say it was bad, it just wasn’t really my thing, or one of the reasons that I was at the show. It’s tough to follow an act like Foxing, but the Chicagoans of Knuckle Puck did their part as best as they could, and their challenging, driven songs generated a steady stream of crowdsurfing pop punkers. Out of any of the five bands on the bill, Knuckle Puck asserted that they were the most pop punk-iest, and the crowd definitely enjoyed that. 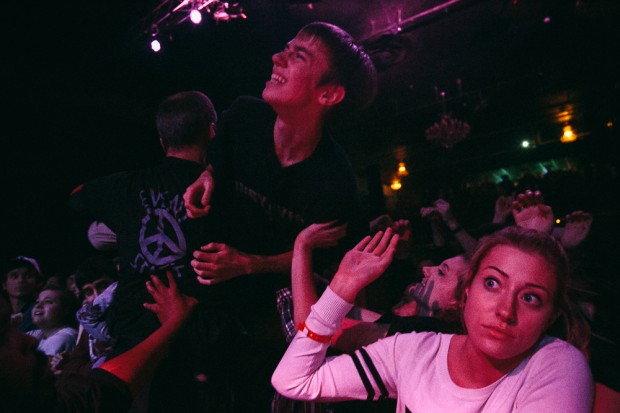 Modern Baseball didn’t waste any time on a long set break or dramatic entrance, jumping right in the deep end with the one-two opening punch of “Fine, Great” into “Broken Cash Machine” — the same winning combo that opens this year’s sophomore release You’re Gonna Miss It All. In many ways, the new material (as well as their eschewal of theatrics) illustrates just how much the MoBo boys have matured since the Sports days.

Even though there’s definitely been a progression, it’s pretty clear to see that when it really comes down to it, MoBo are really the same boys at heart, just with a bit more experience under their collective belt. After the first couple of songs, guitarist/vocalist Brendan Lukens welcomed everyone to the show, laughing and noting how incredulous he was at the room of eager fans. About three quarters of the way through their set they informed the packed TLA that the night had, indeed, sold out completely. From selling out two back-to-back shows at the Barbary for 400 people to an even 1,000 on Thursday night at the TLA is a huge jump, and Modern Baseball is just as excited as we all are, for them. 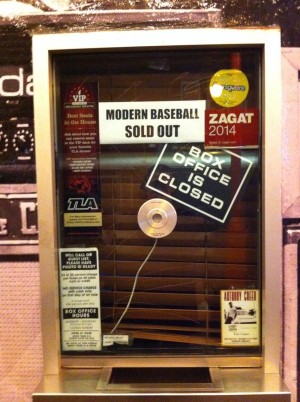 Let’s be honest: Modern Baseball sold out a long time ago. I kid, I kid…

One of the huge attractions of Modern Baseball is the cathartic nature of their music, and there’s nowhere better to experience that healing than at one of their live shows. Thursday proved even more so, with the band digging extra deep in the archives to bring up a couple of the oldies-but-goodies—and even put one to rest entirely. Explaining to the crowd that he felt uncomfortable every time the band used to play “It’s Cold Out Here,” Lukens noted that it was time to give it a proper send-off, and launched into the jam. They followed it up with “Hope,” another rarity from a pre-Sports split with Philly friends Marietta.

The back half of their set proved exactly why Modern Baseball have exploded in 2014: jam after jam after jam. Nonstop sad-punk, beginning the end with a ripping cover of “When You Were Young,” by the Killers that sounded perfectly in place, into “@Chl03k,” and bringing the main set to a roaring close with the always-wild “Your Graduation,” which saw special guests from The Wonder Years singing along and even stage diving into the ecstatic crowd.

Coming back out quickly, MoBo thanked the well-riled crowd with a few words, all the friends and family who came out to support them (and had from the beginning), and went into “The Weekend,” coming out the other side with nothing left on the table. Even though they can only stand most of their old friends for the weekend, MoBo proved to the hometown crowd that that doesn’t apply around here, in Philadelphia. They’ve grown up, and that means learning to love the people that raised them.