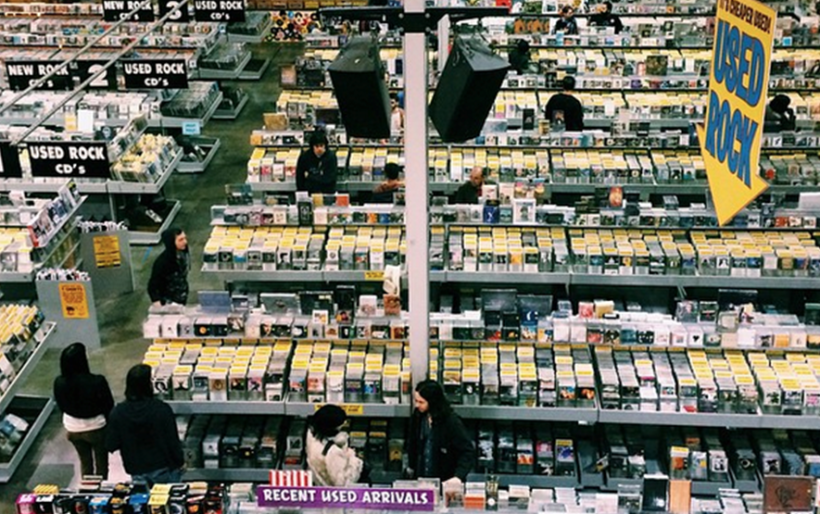 Year-End Mania is the Key’s survey of the things below the surface that made 2014 awesome. In this installment, Key contributor Nikki Volpicelli shares her favorite travel excursions of the year.

As a music writer based out of Philly, I spend a lot of time in the backyard digging up new music to listen to, watch and write about. This year, I had the opportunity to see what other cities and there scenes had to offer, from Los Angeles to San Francisco to Portland to New York City. I ate tacos, saw some punk shows, saw some scientologists, and jumped off of a bar with an 80-year-old man who’s been playing blues covers at the oldest bar in SF every Sunday for 17 years. It all made me realize: the grass is no greener here, there, anywhere. It’s just a different shade.

1. New York City: Everything here is so fucking fast, you can’t blink. I take the Bolt Bus from Philly to catch a few CMJ showcases. I listen to Iceage’s Plowing Into The Fields of Love and walk past Terminal 5 nightclub. It’s dark, windy and rainy, and the Highline is well lit and looks warm. I follow it with my eyes as I walk down 11th street past a ton of construction that blocks the sidewalks. Everything seems to always be under construction, just like in Philly. The horns come seeping into my favorite track, “Against the Moon,” and the keys, to make everything feel romantic. Suddenly I’m watching the scenery as if it’s part of a 50’s movie, where people sit at cafes wearing vintage hats and eating pasta. I wish New York was more like I thought it was when I only saw the movie.

I’m content with keeping everything I’ve packed for my 2 night stay on my back. Every time I drop my bag off at a friend’s apartment in NYC, it seems to take 5+ hours of subwaying to retrieve it.

I see Cruisr and Reptar play a showcase at The Westway, which used to be a strip club and still has a disco ball hanging from the ceiling. There’s also a catwalk that takes up most of the floor space so people are on either side, standing around not dancing. Bud Light bottles are $7. The bathrooms are horrendous even by El Bar/my standards.

2. Los Angeles: There’s something sexy and sleazy about this town. There are a lot of things, in fact. But that’s not a jab, it’s just the vibe I get as I’m walking down Hollywood Boulevard at night and see a guy dressed as Superman sitting at a bus stop. I’m headed to one of the largest record stores in the country, Amoeba Music, the one where they film the “What’s In My Bag?” episodes.

I dig, dig, dig into crates of records and flip through books. I find a section with the best collection of old school psych/rock records I’ve ever seen. I pick up MC5, Aretha Franklin, and some dump truck garage rock 7” before getting in line.  At the checkout, the cashier is wearing a t-shirt with the Rocky statue on it. We talk a little. He’s never been to Philly. I ask him if it’s safe to walk down Hollywood Boulevard at  night and he says mostly, yeah.

If you want to hear what it feels like to be on that street at night alone and observing, listen to Ariel Pink’s “Pom Pom.” The whole album, except you can skip ‘Plastic Raincoats’ and ‘Jell-o.’ It’s the perfect soundtrack to Los Angeles, and this seems to be one perfect LA moment.

The next morning my friend Anna drives me down to Hollywood and Vine to see the iconic Capitol Records building. The building is designed to look like a stack of records, but to me it looks like a tacky big box store, maybe what the RadioShack headquarters might look like.

It’s next to a bunch of palm trees.

I have a religious experience in front of the wall where Elliott Smith posed for his fifth album, Figure 8 (pictured up top). I write a little note with the rest of the love notes between the swirly black and red painted lines. I won’t tell you what I wrote because it will always be a secret. Everyone speaks in low voices out of respect for the wall. Everyone except for the homeless guy drumming on a bucket in front of the McDonalds and singing. You could hear him loud and clear.

“Here, the comedy scene is maybe even bigger than the music scene,” a friend of mine tells me. He’s a comedian with a lot of musical friends. Everyone here wants to be known for something. Even the Scientology students initially came here to act, before they decided they’d rather be known as Scientologists. (PS – A lot of them aren’t rich and famous, and wear Dickies and sweep the floors.)

3. San Francisco: “Sit on your little computers all night and update your APPPPPSSSSS!” he hisses up on stage. I nervously tucked my iPhone away. I swear he’s looking directly at me, the lead singer of this local band called Useless Eaters. I was just taking a picture of your band because I liked you guys, I defended myself in my brain, I think that’s ok.

After the show and over a bucket of Lone Star beer bottles, my new friend Scott tells me that he definitely wasn’t. “There’s a war going on here, Google vs. Us. He’s talking about that divide. They always are,” Scott tells me. These punks hate the developers. These developers have the money. These punks are relatively broke for San Francisco’s standards. Everything here is so expensive. These two groups live far apart, but when they come together sometimes Google Glasses get smashed.

It feels like an uprising, a little bit. Like a real live Outsiders, the socs versus the greasers. You can feel the energy. Something is brewing. I stop by Amoeba a few times while I’m here: once to peruse and once to buy my host the Ty Segall/White Fence album as a thanks for keeping me. It could’ve been Philly in there, but outside the Haight-Ashbury neighborhood where it’s located, it could’ve been a crazy expensive and highly privileged Manayunk. There are exclusive busses that drive all over town and only transport Google and Facebook employees. People call them the Google busses.

A few blocks from Amoeba is the Grateful Dead House. Save for the spraypainted bears and lightening-bolt skulls on the cement out front, you’d have to think this was just any old really expensive, beautiful, traditional SF house. What they did there then would likely not be possible today because money.

The Useless Eaters show was a tip from a guy serving coffee at The Blue Fig, where Scott ordered my host/his beautiful girlfriend Sandra and I breakfast sandwiches. “You look familiar,” he says to Scott. “I think we run in the same circles,” Scott says back.

At this city’s Amoeba, I buy Figure 8 on vinyl and feel like it’s worth spending more than I ever have on a record due to my trip to the wall in LA. I also found a DRGN KING 7”.

4. Portland: I once got a stick and poke tattoo from a guy named Snot or Bug that was supposed to say ‘PDX music’ but now it just says ‘PDX’ because it hurt so bad and he got too drunk to keep working on it. This is the place I fell in love with the idea of being involved in a local music scene. I have a friend named Bim who has a matching tattoo. He’s a drummer, show promoter, band basketball coordinator, tape maker, and general community manager. A lot of people in Portland do a lot of part-time things. This year, I do what he’d have done if he’d visited Philly. I see my friends from home play some shows. Purling Hiss plays a sold out tape release show with a great Portland band called The Woolen Men. Cruisr plays a show downtown at the Roseland. Two very different experiences that leave me feeling very proud of Philly.

Portland is cold and windy this time of year. I notice one of my favorite record shops — Jackpot — has shuttered its downtown doors. I noticed a lot of condos have popped up. Venues, according to some friends, are dropping like flies and my favorite karaoke place that doubles as a Chinese restaurant is headed that way too due to noise complaints from new neighbors.

While at a strip club with friends, I decide I want to write a story about how a stripper’s music choice affects their tips. One woman on stage dances to Miley Cyrus and then to the Pixies and I tip during the Pixies.

5. Philadelphia: Philly. Here you get to see your whole world on nights when there’s a good show. Lantern plays a show at Everybody Hits batting cages and the owner beams he’s so happy with the size of the crowd and the music. Brown grocery bags within plastic grocery bags litter the picnic tables that are set up inside. The stage is all set up to break right back down.

I learned to spin records this year from a friend of mine who’s got a way bigger record collection than I do. Sometimes there’s pizza and there’s always beer and friends. The bar where we DJ is working on updating its look from smokable Fishtown watering hole to swanky and classy. The owner changed the name and bought a new sign to hang outside above the door: Bobby’s. One word, like Madonna.

Traveling is the best thing you can do every year. You discover different cities, different scenes made up of different families. The language is different — it comes in the form of talk, dress, jobs and habits. In LA, people have to deal with the sprawl and drive for a long time to meet up. Sometimes they meet to laugh at jokes and sometimes they meet to listen to music. In San Francisco, they wear band buttons and rage against the machine and eat burritos. In Portland, they dance and drink and multitask. In New York, they spend money and if they’re lucky, get noticed. And in Philly, they wear their friend’s band’s t-shirt to their other friend’s house show, and drink beers in batting cages, and don’t try too hard to be anything but lovable dirtbags. It’s good to be home.