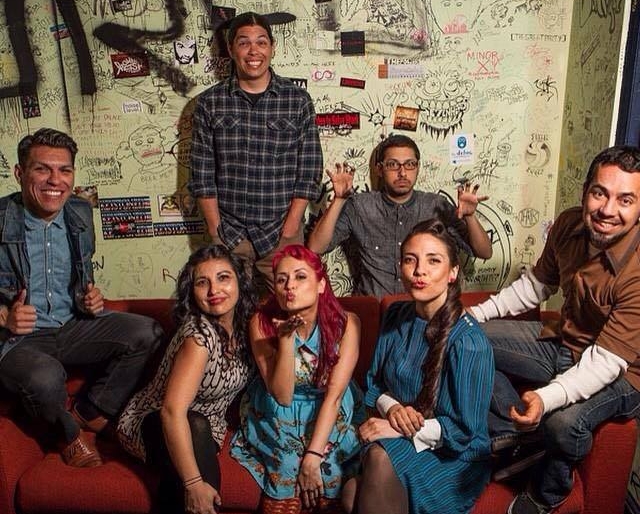 Chicano Batman draw on Sixties and early Seventies Brazilian bossa nova and samba, cumbia, psychedelia, and soul with panache. Back in July, frontman Carlos Arevalo explained their superhero-esque name to The Key’s Shaun Brady in an interview, saying “The idea of it is that underrepresented people can be superheroes in their own right. There’s people out here in L.A. that are working hard every day to provide for their family, and that’s a superhero to us.”

Headlining the show, Las Cafeteras are a seven piece from Los Angeles who put their own non-traditional spin on a traditional form of music called Son Jarocho, an old form of Mexican music from Veracruz. When they’re not playing music, members of the group are active as community organizers and the nonprofit sector. Las Cafeteras’ brand of music is political folk informed by punk and hip-hop. During an interview with Pilar Tompkins Rivas of KCET, the band explains their origins:

Empowering each other to learn music and infuse this folk tradition with influences and storytelling that reflected their own experiences, the participants eventually formed what is now the group Las Cafeteras. “We always say that we didn’t find the music, the music found us. Las Cafeteras was not born from a group of musically trained artists, we were born out of a community struggle,” the band says. Member Annette Torres describes their genesis: “Angela agreed to teach a group of us what she knew of Son Jarocho in a sort of each-one-teach-one, or DIY approach. I think we took it as a way to explore connections to our Mexican heritage and the power of the music to build community, tell stories from our communities, and create a more convivial and communal space. Son Jarocho has a built-in tradition of the fandango, a sort of community celebration and jam session where everyone, including the audience, is a participant.”

The energy of these two bands on the same bill points to this concert being a show you don’t want to miss. Go here for tickets and more information about the show. Below, sample some music from the bands.