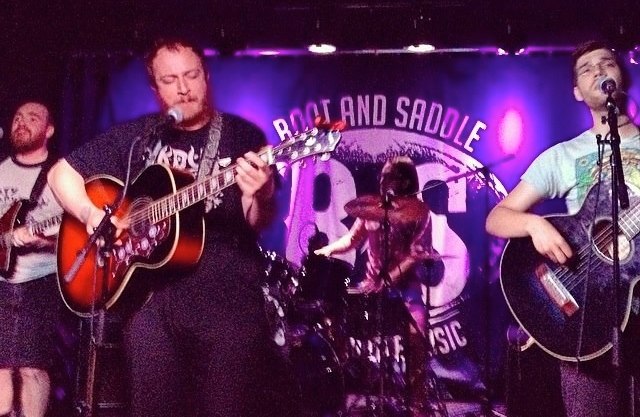 On the Water | photo via facebook.com/weareonthewater

Theatrical folk group On the Water welcomed in the new year with the release of their latest EP, Baptism. The West Philadelphia troupe of varying sizes and instruments recorded the four-song setat Sex Dungeon Studios in Philly, andis the band’s first release since their March 2013 album False Starts. On the Water’s freak-folk style has garnered attention in the West Philly basement scene with their accordion and banjo-led sea shantys. But one of the first differences on Baptism compared to past releases is a lack of their tumultuously folk-influenced instruments. There isn’t a single song featuring an accordion, banjo, or mandolin on Baptism. Lead vocalist and lyricist Fletcher Van Vliet appears to have taken a bluesier approach to this latest release.

Tracks from the New Year’s Eve release, “Baptism” and “Surfs Up!”, were featured on the band’s March 2013 lo-fi demo release Doorways. “Surfs Up!” showcases a booming chorus led by frontman Van Vliet’s raspy-folk, cut-through vocals. Taylor Jamison’s upbeat bass line in “Baptism” makes it clear that the West Philly folk crew aren’t straying too far from their folk roots. Van Vliet’s flexibility as a vocalist is viewed in the third song off the EP, “Jackrabbit.” His emotionally-driven raspy vocals transform to the likes of Dr. Dog’s Toby Leaman.

The maturity of Van Vliet’s lyricism hits an entirely new level in the three-part song and last track, “The Words I II III.” The lyrics go through a cycle of questioning poetic justice. “Sometimes that’s all I can think of. I am blinded by the things I cannot perceive. So how am I to trust anything?” The three parts appear to go through a series of spiraling emotions that exhibit phases of denial, grief, and acceptance. This track stands out and brings meaning to the “theatrical” label On the Water often receives.