Reimagining Ortlieb's: Domenic Palermo of Nothing and Kyle Costill of BITBY are revamping the NoLibs venue 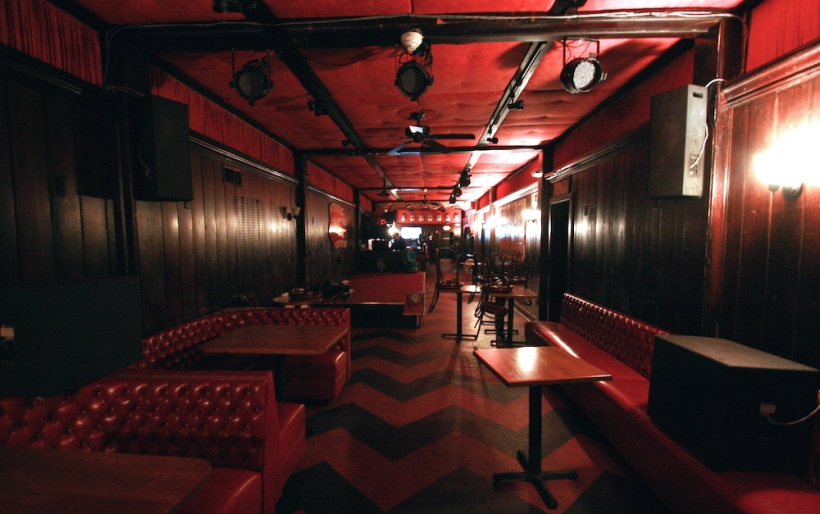 Reimagining Ortlieb’s: Domenic Palermo of Nothing and Kyle Costill of BITBY have big plans for the NoLibs venue

By Nikki Volpicelli
January 23, 2015
10:01 AM
Share
A view of Ortlieb’s from where the new stage will be | Photo by John Vettese

Before he had Nothing, Domenic “Nicky” Palermo spent a decade in the service industry.

He ran the gamut of gigs, from busboy to bartender to manager of multiple bars and restaurants around Philly. And through this time, he always had his music a s a side gig.

But 2014 was a breakthrough year for Nicky’s band. The Philly-based shoegaze group toured extensively around their debut LP, Guilty of Everything, which was released last March by Relapse Records, picked up as an NPR First Listen and named one of the “Best Overlooked Albums of 2014” by Spin Magazine, to name just a few of its accolades.

Nicky left the hospitality industry a year-and-a-half ago so that he could do nothing but Nothing. Then, he was given the opportunity to re-enlist and take on his newest project: Ortlieb’s.

His old boss, Mark Fichera, offered him the opportunity to hold stake as an owner of the Northern Liberties establishment, along with Kyle Costill (of BITBY, who was already acting as general manager of the bar and venue).

“Kyle’s been doing such a great job with the bare minimum of stuff. Bringing in really cool bands and having them play in kind of a… not particularly great environment,” Nicky says truthfully. It’s no secret that the narrow armpit of the bar where the stage has been fixed for years is awkward for performers and show goers, who typically have to stand in front of the women’s bathroom door to watch a show head on.

“The amount of shit he was able to do with what he had was great. That was a really good thing when they approached me, I helped Kyle get in here in the first place and he did much better than I could’ve ever imagined. When I was approached it was a no brainer, like what can I do to help out?” he remembers. Despite the fact that the three men have or have had close ties with Four Corners Management, Kyle makes it clear that the corporation has “zero hand in the pot” when it comes to the relaunch of Ortlieb’s, and that it’s no longer a venue under the company’s umbrella. (The Four Corners website still includes Ortlieb’s on its roster; however, the site is a basic landing page that has not changed much over the past year.)

Nicky explains “As far as my end goes, [I’ll be] focusing on the venue side and bringing a lot of the bands that I’ve become friends with [while touring]… letting them know that I’m here and I’ll be working on this project. Kind of trying to use that to my advantage to get some of the better shows in here.”

The guys plan on making alterations to the face of the space. Most notably, they’ll be moving the stage to the back of the room and dividing the bar and venue space for respective sound concerns. They’re bringing in a new chef, new sound technicians and some seasoned, independent bookers who Nicky promises have “put on some of the biggest shows in the city” (and whose names are still under wraps until February, when the relaunch is planned.)

But more important to them than the visual aesthetic, the guys are interested in bringing good karma to Philadelphia’s reputation as a city for touring bands to come visit.

Kyle puts it this way: “If you’re nice to people, you’re gonna get paid back tenfold in other ways. And being nice to someone could be like, ‘Oh, you don’t drink Coors? Sure, you can have this’,” as he motions pulling an invisible beer from behind an invisible bar.

“Our main goal is to take a European style of hospitality,” Nicky goes on. “It’s tough to be hospitable in a venue where you’re topping out at 150 or 200. The ship is kind of difficult to keep afloat. But just like any other business you have to take a bit of a loss before you see any profit and we just really want to be the place where people are taken care of when they come here,” he says.

Then he unleashes an all too familiar rant.

“You have bands that can put 100-150 people in a room and the venue shows no respect or hospitality to them and it’s horrible, you know? Me being around the world and hearing what people have to say about playing Philadelphia, it sucks. Me being here my whole life and going to shows, it’s terrible to hear that.” You can hear a thick Philly drawl when he says the word “terrible.” It’s a word that he’s filled with disgust to make his point.

The guys plan to offer artists “more than just a few drink tickets” and are hoping to one day make the space above the venue a hostel-style apartment for touring bands. They promise bands will be treated well, and paid well, which is the one point the guys drive home the furthest. Nicky says:

“There’s so many good bands that I’ve seen from all over…they come [to larger venues in Philly] and max out at 100 at the most, and it sucks… you feel bad,” he says, because “the vibe is off.” He hopes that Ortlieb’s as a 200 cap venue might remedy this.

“That on top of it the venues not giving them any money and there’s no hospitality. Each band member gets three drink tickets and, you know, I mean everyone knows the story. And I’m not coming at anyone either, it’s a tough business.”

While a lot of the venue’s shows and main players are still under wraps, Nicky and Kyle were able to confirm Diamond Rugs will be playing its first Philly show at Ortlieb’s in March, and that a psych/experimental group called Chui Wan from Beijing will be playing with Light Heat in May. Ricky Maymi (original drummer of The Brian Jonestown Massacre) will DJ a late night set.

Additionally, Nicky plans to keep Ortlieb’s open during the day as a rehearsal space for bands.

“’Hey, can you open the door for these guys?’” Nicky says, mocking a phone call, “’They wanna do this thing…’ that’s the kind of place we want to be. Any way we can help give back to the music community is the goal.”

And, he adds: “When my band fails finally, I’ll be the guy bartending making everyone miserable.”