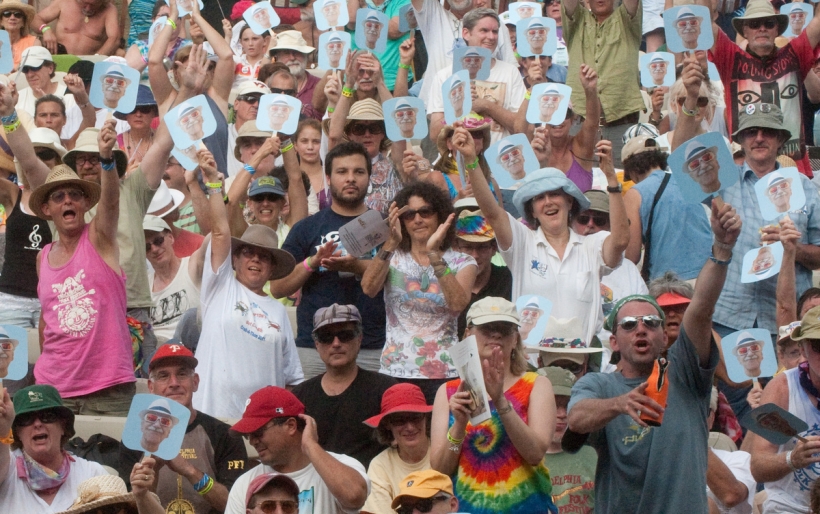 “Sing For Gene Shay” is a new tribute song to the “Dean of Folk DJs” Gene Shay in honor of his retirement this Sunday, February 1st as the host of WXPN’s Folk Show. Written, recorded and produced under the name of “Friends Of Gene,” 25 local musicians and a team of four producers and engineers came together to pay a loving tribute to Shay, who has been on the air for 50+ years hosting folk music in Philadelphia.

Throughout the song, the lyrics touch on some of Shay’s most endearing and enduring qualities: his warm, friendly radio voice and manner, his ability to discover new musicians and expose their work to audiences, his reputation for telling jokes (both good and bad ones), his presence at the Philadelphia Folk Festival since he co-founded it in 1962, and above all his friendly, welcoming, and good hearted nature, and his ability to given confidence to musicians.

Jay Levin of Turtle Studios tells us that the idea came from Tokay, who runs Little Spiders.

Ernie came up with a basic tune with Dom Flemons (of the Carolina Chocalate Drops) who is also a big fan of Gene’s. The original sketch was “Hey Gene Shay”, and it was a play on the Bob Dylan tune “Song To Woody” (with the line “Hey Woody Guthrie”). The tune really came into shape when he brought Phil D’Agostino and Daniel Bower in to lay down the rhythm section. Phil has played bass with seemingly 80% of all the Philly folk acts heard on XPN in the past ten years. Daniel plays many instruments in Frog Holler and other bands, and he played drums on this; he’s the Moonlight Forest guy, and a few years ago he founded Woodfarm Records, which is another incubator of cool folk projects. Anyway, those guys really worked over the original tune and brought it into shape, giving it the great feel and form that is the bedrock of the track.

From there, it became a race to call people to see who we could get to contribute in a short time-frame.

During the song, various musicians carry the lead vocals and solos. Thanks to one of the producers, Jay Levin, he breaks down the singers and players:

Verse 4
Autumn Walden and Ernie Tokay (of Kicking Down Doors) on vocals.
Sarah Larsen (of Highwater Preachers) on fiddle in the later verses.

Instrumental break
Billy Dominick leads the fiddle brigade with Rosie and Sarah.
Stacy Weathers on banjo in the later verses.
Ben Arnold pounds away on the piano.

Verse 6
The camp choir (members of No Good Sister and Fistful of Sugar, many
other friends of Gene) sings us out, and the whole band joins in for the
end.

Of the collaboration, Levin was thrilled to have such a broad range of musicians collaborating on the track, not to mention the three studios: Turtle, Little Spiders and Morningstar.

It was great to get [everybody] involved…recognizing that Gene Shay is so much bigger than any one part of the scene. He reached all of us.

Download the song for free at Bandcamp, and be sure to check out an in-studio photo gallery and the lyrics below. 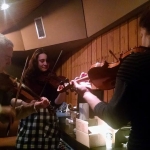 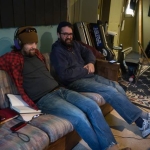 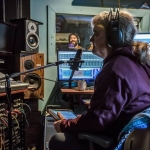 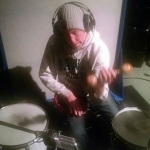 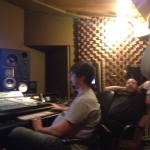 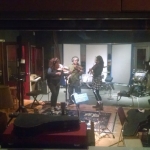 Fiddlers in the studio | Photo Courtesy of Jay Levin

Tune in to Gene Shay’s final show this Sunday, February 1st at 3PM with a rebroadcast at 8PM.

There’s a voice coming through on my old radio
Well it’s warm and it’s kind, and it feels just like home
It’s the voice of a man with a deep history
A great sense of humor and a spirit so free

He’s been down on the farm and up on the stage
A friend for so long, never showing his age
Now the years have gone by, but the music’s the same
And we’ll be missing that voice on the radio waves

Hey, hey, did you hear the one
About the folk singer who had just begun?
He was down on his luck, with no place to play
Til somebody said, “Go sing for Gene Shay”

He’d sit and he’s listen to anyone’s song
Pick out the best, tell you where you went wrong
Maybe tell you some things that you don’t want to hear
Trust in his wisdom and great set of ears

He’s talked to the heroes of folk music past
He’s got so many stories, so many laughs
And he’s always got time for the new blood comin’ in
He tells the same stories and makes them his friends

So with the wind at your back and the road up ahead
The future wide open and the songs in your head
You can sit back, relax in the Dulcimer Grove
You’ll open your heart to the people you know

You’ll open your heart to the people you know